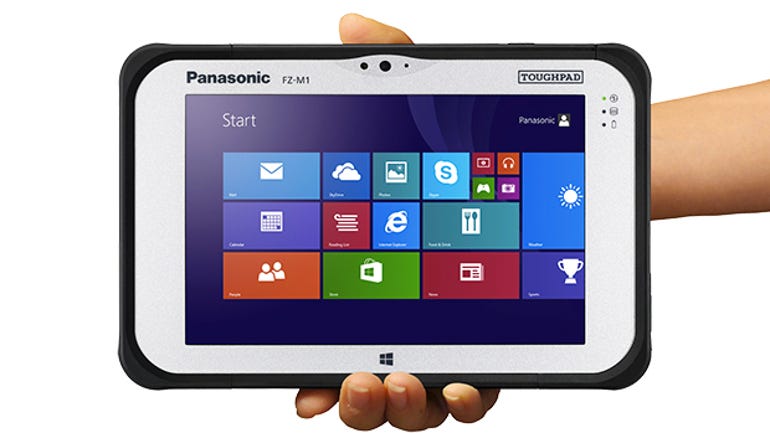 Panasonic's Toughpad range is the tablet branch of its long-established Toughbook family of rugged Windows-based portable computers. Following the 10.1-inch Toughpad FZ-G1 that we reviewed a year ago, we now have its 7-inch sibling, the FZ-M1 on the testbed.

We found the 10.1in. FZ-G1 to be rugged, if not bomb-proof, and a decent performer with middling battery life from the standard battery. Our main reservation was the high list price, although we acknowledged that large businesses might go for it anyway — especially if they received volume discounts. So how does the 7in. model shape up?

Like its bigger brethren, the Toughpad FZ-M1 looks the rugged part, with its 7-inch touchscreen surrounded by rubberised edging that not only protects the device, but also provides a good grip. When held in the default landscape orientation, there's a 20mm bezel on either side, giving plenty of room for your thumbs (even with gloves on) without making unintentional screen presses; above and below the screen the bezel measures 11mm and 13mm respectively. As usual with Toughpads, the tablet's otherwise vulnerable corners are particularly well protected.

The Toughpad FZ-M1's extra weight and bulk is, of course, the trade-off for its rugged ABS-encased magnesium alloy chassis, which has the usual MIL-STD 810G rating — including the capability to withstand a 5-foot (1.5m) drop onto two inches of plywood over concrete. It also has an IP67 rating, which makes it both 'dust tight' and able to withstand immersion in up to 1m of water for 30 minutes. The 10.1in. FZ-G1, by contrast, was only IP65-rated, and therefore able to withstand 'water jets' rather than total immersion.

Above the screen is a 720p front camera, flanked by an indicator LED and an ambient light sensor. There are more LEDs in the right-hand bezel, at the top, for power, drive and battery status. Beneath the screen, in the middle, is the customary Windows touch button.

At the back is the removeable battery (our review sample had the standard 3,220mAh battery, although a long-life 7,100mAh option is available), whose compartment houses a Micro-SIM slot and a Micro-SD card reader. Also at the back, on the right-hand side, is the main 5-megapixel camera, which is equipped with an LED flash. You'll need to be careful that you don't obscure the rear camera lens with your fingers when gripping the tablet in landscape orientation. Talking of gripping, our review unit also came with an adjustable hand strap that attaches to the back of the tablet: it's primarily designed for working in landscape mode; a rotating hand strap is available if you also use portrait mode regularly. The hand strap has an attachment for the optional capacitive stylus, which also came with its own tether.

The left-hand side of the Toughpad FZ-M1 is bare save for the covered round-pin DC input. At the top there's a dual-array microphone, a volume rocker, the power switch, a screen-rotation lock button and a button marked 'A' that, by default, fires up Panasonic's Dashboard utility (see above). The right-hand side has a 3.5mm headset jack and a USB 3.0 port behind a protective cover. The underside houses the docking connector and a pair of Kensington lock slots.

The 7-inch 10-point touchscreen is a matte-finish IPS unit, and therefore has good outdoor visibility and excellent viewing angles. It's a bright, clear LED-backlit display with a native resolution of 1,280 by 800 pixels (216ppi — the same as Google's original (2012) Nexus 7 ). The screen is nicely touch-responsive, but we appreciated the stylus when negotiating the desktop interface, where drop-down menu items, in particular, are tricky to select accurately.

The Panasonic Toughpad FZ-M1 is powered by a dual-core Intel Core i5-4302Y vPro processor running at 1.6GHz, or up to 2.3GHz with Turbo Boost. Our review unit had 4GB of RAM installed, with a maximum installable complement of 8GB. Graphics are handled by Intel's integrated HD Graphics 4200 GPU, which dynamically accesses a configurable chunk of RAM for video purposes. Storage comes in the form of a 128GB Samsung SSD, with a 256GB option available and the aforementioned Micro-SD card slot on standby for expansion. The operating system is Windows 8.1 Pro, with a Windows 7 downgrade option.

By default, connectivity is entirely wireless: the tablet supports 802.11a/b/g/n/ac wi-fi and Bluetooth 4.0, with LTE mobile broadband, NFC and GPS available as options. If you need Ethernet, you'll have to specify an 'upgrade package' for the tablet that includes an RJ-45 port, or invest in one of the optional desktop cradles. The fully-featured desktop cradle with Ethernet, USB 2.0 (2), HDMI, VGA and serial ports, plus a battery charging slot, costs £280 (ex. VAT), while the 'Lite communication cradle' with Ethernet and two USB 2.0 ports costs £205 (ex. VAT).

Other upgrade package options include a bridge battery that allows you to hot-swap main battery packs, a 1D/2D barcode reader, a smartcard reader, a magnetic stripe reader, an HF/RFID reader and a UHF/RFID Gen2 EPC reader. These components make the Toughpad FZ-M1 a highly configurable tablet for a range of vertical markets.

Microsoft's Windows Experience Index (WEI) is no longer surfaced in Windows 8.1, but the benchmark is still there if you know where to look for it. The Toughpad FZ-M1's component scores, which are out of 9.9, pan out as follows:

When it comes to battery life, Panasonic claims that the standard battery will last for 8 hours. Our estimates (see graph below) are based on system power consumption measurements made using a Voltcraft VC940 multimeter under various combinations of screen brightness (25%, 50% and 100%) and workload (idling at the Windows desktop and running Microsoft's Fishbowl HTML5 test). Dividing the resulting wattages into the standard battery's 22Wh capacity gives us our estimates for battery life (Wh/W=h):

Our results suggest that, with middling screen brightness and a mixture of idling and heavy workload, the system should last for around 5.5 hours on the standard battery. To be certain of a full day's work away from mains power, you might want to consider specifying the optional long-life battery, which Panasonic rates as good for up to 16 hours. If you carry multiple battery packs, the bridge battery mentioned earlier is worth considering: this gives you time to swap batteries without having to power down the tablet.

Finally, this is a fanless device, which makes it admirably quiet in use. Thankfully, we didn't find that the Toughpad FZ-M1 ran in any way hot.

If you're looking for a rugged Windows 8.1 tablet that's relatively compact and lightweight, Panasonic's 7-inch, 540g, 18mm-thick Toughpad FZ-M1 is a good option. The 8.1-inch Getac T800, by contrast, weighs 880g and is 24mm thick. However, with prices starting at £1,183 (ex. VAT) and climbing rapidly as options are added, the FZ-M1 is a costly tablet — as you'd expect from a specialist rugged device. In recognition of the price issue, Panasonic recently announced a Celeron-based 'value' version of the Toughpad FZ-M1, starting at £739 (ex. VAT).