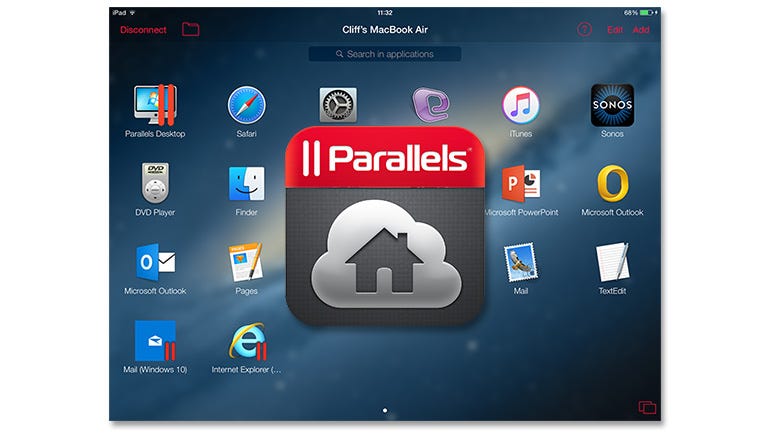 Parallels Access was originally called Parallels Mobile and was developed as a companion for the Parallels Desktop virtualisation software for the Mac. However, it has since developed into a standalone remote-access tool that stands out from its many rivals thanks to a polished graphical interface that moves the focus away from the Mac or Windows desktop on your remote computer and puts you right inside the key apps that you need for your work.

Like most of its remote-access rivals, Parallels Access consists of a mobile app, available for both iOS and Android devices, and a separate program, called Access Agent, that runs on the remote Mac or PC and maintains the connection between your devices.

Like rivals such as LogMeIn, Parallels Access has the ability to display the desktop of a remote Mac or PC computer on your mobile device's screen. But, by default, Parallels Access presents users with its own App Launcher interface instead. This hides the desktop of your remote computer and simply displays icons for the key apps that are installed on that computer -- just like the normal home screen of most iOS and Android devices. Parallels calls this 'Applification'.

You can tap on any app to launch the app on your remote computer and -- with a suitably fast wi-fi connection -- it will then appear in full-screen mode on your smartphone or tablet so that you can get straight down to work. The app also includes a file browser mode, called the File Manager, that allows you locate the files you need on your remote computer.

The App Launcher hasn't really changed in Parallels Access 3.0, but the File Manager has been refined in a number of ways. The headline feature here is the ability to share files with other people by sending them a download link that connects to the relevant file on your remote computer. This can be done using either the File Manager on your mobile devices, or the Access Agent on the remote computer itself. However, the file remains on the remote computer, so that computer must stay online so that other users can connect to it and download the shared file.

The File Manager in Parallels Access 3.0 no longer takes control of the screen of your remote computer. Instead, it concentrates purely on manipulating individual files and folders, which makes it feel quicker and more responsive as you navigate through folders to find your files.

And when you select a file on your remote computer, you can either open it using a program on that computer, or open it within a suitable native app on your smartphone or tablet. You could, for example, select an Excel spreadsheet on your office Mac or PC and open it on your mobile device with the mobile version of Excel, which will obviously provide better performance than editing remotely over a wi-fi connection. You could then use the File Manager to simply drag and drop the edited file back onto the remote computer when you're done.

Parallels Access was originally developed for iOS devices, so the iOS version of the app is a little more advanced than its Android counterpart. The iOS app supports the 64-bit architecture on Apple's latest iOS devices, and provides improved previews of files in the File Manager to help you locate the files you need. There's a new gaming option -- currently labeled as 'experimental' -- that lets you configure a kind of virtual gamepad using touch controls on the screen of your mobile devices. And, inevitably, there's an app for the Apple Watch that will allow you to monitor the status of remote computers and control media playback for music and video.

Both versions of the app can be downloaded and used free of charge for two weeks, with full subscriptions available as in-app purchases. Single-user licenses start at £13.99 (inc. VAT, or $19.99) per year, but there are also business plans that allow an administrator to create and manage multiple accounts.

Remote-access apps are a popular category on both the Apple and Android app stores, so Parallels Access certainly has plenty of competition. However, its graphical interface helps it stand out from its rivals by making it easier to use desktop software with the touch-sensitive controls of mobile devices. That interface, along with useful features such as the File Manager, make it one of the most efficient and productive options for getting work done when you're away from the office and need to connect to a remote computer.