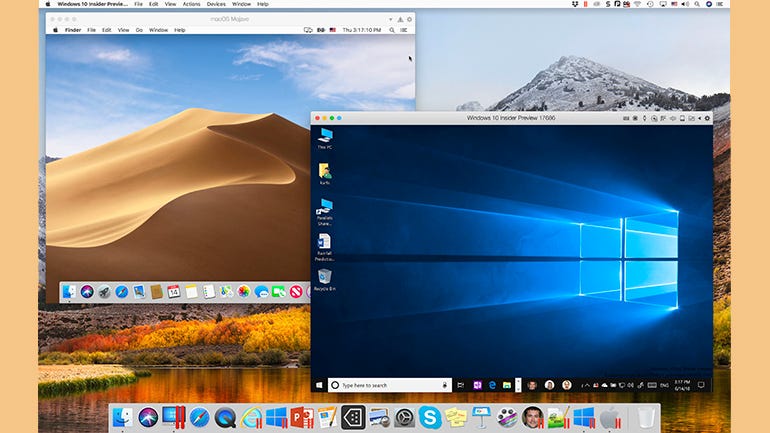 A regular cycle of annual upgrades has established Parallels Desktop as the leading virtualisation tool for Mac users who need to run Windows apps and software tools that aren't normally available on the Mac. Those upgrades also tend to coincide with new versions of macOS itself, so with macOS Mojave now in the final stages of beta testing it's time for version 14 of Parallels Desktop to make its debut.

Last year's upgrade to v13 largely focused on catching up with recent developments in Mac hardware, such as the Touch Bar on Apple's latest MacBook Pro laptops. In contrast, v14 is more forward-looking, allowing you to create Windows virtual machines (VMs) that support new technologies, such as Intel's high-performance AVX-512 instruction set, which is used in the current Xeon-based iMac Pro, as well as the next generation of Cannon Lake chips. The developers have also improved OpenGL support for Windows VMs in order to enhance performance for a number of graphics-intensive apps, such as the OriginLab range of data analysis tools, which haven't run well within the virtual machine environment in the past.

There have been performance improvements in other areas too, with Parallels claiming that Coherence mode, which hides the Windows desktop so that Windows apps simply appear on the Mac desktop alongside native Mac apps, provides 17 percent higher frame rates when running graphics software. Launch and suspend times for virtual machines are also improved, along with performance of the Windows 'virtual disk'. And, for developers who may need to run multiple virtual machines with different operating systems, there's a Disk Space Wizard that helps to reduce the overall size of each virtual machine file.

Parallels always likes to support Apple's latest eye-candy features, so Windows virtual machines in Parallels Desktop 14 will be able to use the new Quick Look markup features that are due to arrive with macOS Mojave. The Touch Bar on the MacBook Pro laptops will now work with additional Windows apps, including QuickBooks and Microsoft Visual Studio, displaying menu commands from those apps directly on the Touch Bar. And, on the Windows side of the fence, Windows 10 virtual machines will now allow you to use a pressure-sensitive stylus or trackpad with Windows Ink.

Parallels also informed us that it should be possible to accelerate graphics performance on a Windows VM using an external GPU (eGPU), such as the Blackmagic eGPU that Apple is currently promoting.

We've not yet had the opportunity to test the Blackmagic eGPU, but this raises the possibility of a 'best of both worlds' scenario where a single Mac runs native macOS on one display, alongside an eGPU-accelerated Windows VM on a second, external display.

As always, Parallels Desktop offers three annual subscription plans. The standard version of Parallels Desktop, designed for individuals in education or smaller businesses, costs £58.32 (ex. VAT; £69.99 inc. VAT, or $79.99). There's also a Pro version for developers, costing £66.66 (ex. VAT; £79.99 inc. VAT, or $99.99), which supports development tools such as Microsoft Visual Studio and Vagrant. And, at the same price, the Business Edition provides administration tools for IT managers who need to deploy and manage multiple VMs to users across their organization.

Parallels has also introduced a new 'perpetual license' option, for the same price as the Pro and Business editions. This allows you to use the current version of Parallels Desktop for as long as you like without requiring an annual subscription -- although you no longer receive the automatic upgrades that are included with an annual subscription.

Parallels Desktop 14 saves storage space on virtual machines (CNET)
The new version is a lot faster too, the company says.