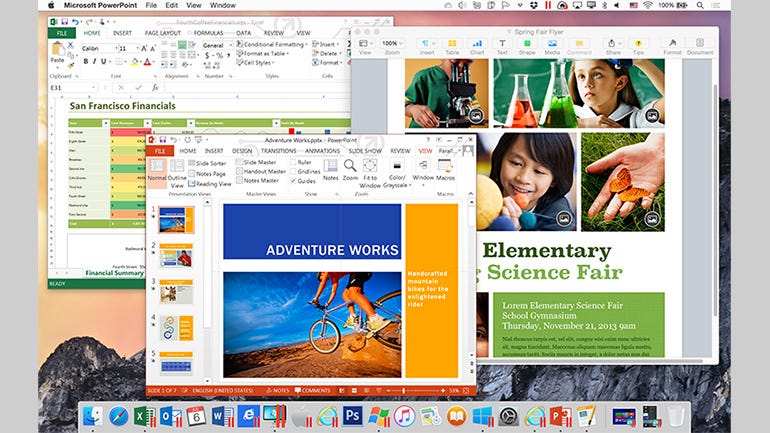 The most impressive aspect of Parallels Desktop 11 is not simply that it allows you to run Windows as a virtual machine (VM) on the Mac (along with various versions of Unix, and even Android and ChromeOS too), but that it continues to integrate the Mac and Windows environments so that features from each operating system become almost interchangeable.

One of the headline features in Windows 10 is Cortana, the 'personal assistant' that lets you use voice commands to find information on the web, send messages and perform a variety of other tasks. Cortana is often compared to Apple's Siri, but Siri is currently only available on Apple's iOS devices and doesn't run on the Mac. Parallels Desktop 11 therefore pulls off quite a trick by allowing Cortana to not only run within a Windows 10 virtual machine, but also to run with the VM hidden or running in the background while you work in native Mac apps. So, while I'm typing this review in Apple's Pages wordprocessor, I can say "Hey Cortana - schedule a meeting". The Cortana window then pops up from the Dock on the Mac desktop and lists options for my meeting.

Other examples of this OS integration include the Mac's QuickLook option, which now works within Windows too, allowing you to preview documents stored on a Windows virtual machine just by hitting the space bar on your keyboard.

Parallels even modifies the standard Mac interface to add a new window control button for your virtual machines. Alongside the existing buttons that close or minimise windows, there's a new button that instantly switches a VM into Coherence mode, hiding the Windows desktop so that Windows apps sit right on the Mac desktop. And, when running Windows 10 in Coherence mode, the Windows Action Centre can be viewed as a panel that slides in from the right-hand side of the screen alongside the Mac's own Notifications panel.

Activating some of these new features may require updating individual virtual machines - as well as the Parallels Desktop app itself. Unfortunately the help files provided by Parallels are less than comprehensive, and may leave newcomers struggling at first.

There are so many new features in this upgrade that the developers have grouped a number of key features together in a new Parallels Pro Edition, that will go on sale alongside the existing Parallels Desktop and Parallels Business Edition.

The Pro Edition is aimed at developers and other power users, and supports tools such as Visual Studio and Docker for developing and testing applications on a variety of VMs running different operating systems. The Business Edition includes all these features, along with additional tools for IT managers who need to administer and deploy site licenses of the software, or create and manage standardised virtual machines for their staff.

Running Windows as a virtual machine on a Mac requires a considerable amount of memory and processor power, so the developers at Parallels continue to fine-tune the program's performance. Parallels Desktop 11 claims to improve startup and shutdown times for virtual machines by as much as 50 percent. It's hard to put a specific figure on this, but the Windows 10 VM that we tested on our office iMac certainly seemed to respond quicker than with the previous version of Parallels Desktop. This version also introduces a new Travel mode, designed to reduce energy consumption of Windows VMs in order to improve battery life on Mac laptops.

The only minor disappointment with this update is the fact that Parallels has leaped onto the software-as-service bandwagon, which means that the Pro and Business Editions require an annual subscription of £69.99 (inc. VAT; $99.99). However, that price does also include a year's subscription to Parallels Access -- the remote access app for iOS devices, which is also about to be upgraded.

The standard single-user version of Parallels Desktop 11 is also still available for a one-off price of £64.99 (inc. VAT; $79.99), and there's a two-week trial version that allows you to switch between Desktop, Pro and Business editions to see which one best suits your needs.

Parallels 11 isn't the only virtualisation option available for Mac users who need to run Windows apps, but it's certainly more polished than rivals such as VMWare's Fusion (which is also due for an update when El Capitan arrives). Its close integration of the two operating systems gives users the best of both worlds, allowing them to switch easily between apps, regardless of which operating system they were written for.