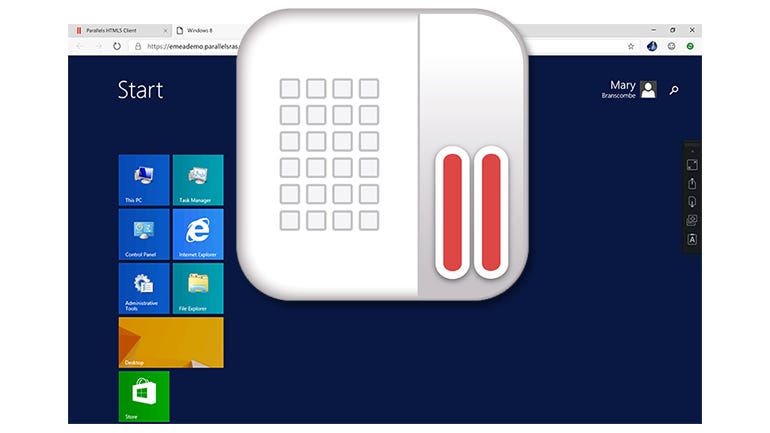 If you're looking for an all-in-one VDI and remote application solution that you can run on your own servers or in the cloud, Parallels Remote Application Server (RAS) is straightforward alternative to the likes of Citrix. The latest version promises more customisation, more security options and machine learning that tracks user behaviour to make their desktops start up more quickly.

Like other VDI solutions, Parallels RAS 17 lets you publish multiple versions of Windows, as well as individual applications and even files that you want users to have access to from their own devices. There are RAS clients for Windows, macOS, Linux, iOS, Android and Chrome OS, plus an HTML5 client -- and a new web console for admins where you can monitor and manage the infrastructure, including users and active sessions. This has the same user interface as the usual Parallels server console, but it's one less thing for admins to install.

Right-click on a host server and you can jump straight to Event Viewer or PowerShell on that system, ping the host or netstat or telnet in, or reboot the machine if it's hung. You can also add your own tools to this menu. You can also drill into user sessions and see what processes are running, or log them off if they report that the desktop has hung. There are now 19 different reports, including new reports on application usage and tunnelled gateway sessions, plus more options for creating custom reports.

Not only can you customise the look of the web portal for employees, but if you already have a company portal you can also use the new REST APIs to integrate access to Parallels RAS. The APIs are an addition to the existing PowerShell options for working with Parallels RAS.

There are granular admin permissions (view, modify, add, delete and control) for specific components covering everything from hosts and gateways to remote PCs, themes and application publishing. This means you can give the helpdesk team view-only access for troubleshooting and let business managers publish files and applications without worrying that they might make changes to the underlying infrastructure. It will also help service providers supporting multiple customers.

Parallels RAS 17 uses the new Microsoft RDS features in Windows Server 2019 for faster VDI and RDSH server provisioning, but it still supports multiple versions of Windows Server (back to 2012). Many organisations will be using multiple hypervisors, and service providers will certainly have to deal with multiple virtualisation options. When you create templates for deploying sessions you can choose from multiple VDI hosts -- VMware vCenter or ESX, Hyper-V including failover clusters, Citrix, QEmu KVM, Nutanix and now Scale Computing's HC3 hyperconverged infrastructure appliance -- and manage them all from the same console, with the same controls.

It's not on by default, but you can enable HSTS on gateways, which forces all connections to that gateway to be over HTTPS. The vagaries of enterprise network equipment mean that this will need testing in your environment, but if any confidential information is available through these remote desktops you'll want to enable this -- especially if you're in a regulated industry. If you want to use MFA to protect access to client sessions, you can now use the authentication apps that are common on smartphones. This is labelled as Google Authenticator in the interface, but it supports the Microsoft Authenticator, Duo Mobile and other apps that use TOTP (Time-based One-time passwords). With phishing attacks getting so common, you'll want to turn this on for most users.

If MFA adds a little time to user logins, they might well get it back from the pre-launch option for a machine-learning session. This tracks the applications users launch most, day by day, and 'pre-launches' them -- starting the app automatically when that user logs on so it's ready to use when the desktop loads. That's definitely faster than logging on, launching the application by hand and then waiting for the session negotiation, although it will be most useful for users who need more than one application (because they could launch that application on its own as long as it's been published separately). You can choose days to exclude from the machine learning training -- if it's the end of the quarter and there's a reporting app a user will be launching repeatedly that won't be their normal workload, for example. However, that would be better as a setting for users themselves, rather than relying on admins knowing user patterns or on users asking support to adjust the pre-launch behaviour.

The focus of Parallels Remote Application Server is very much on the admin rather than on self-service tools. It continues to be a good balance of power without complexity, and if you need remote desktop and VDI options that Microsoft's upcoming Windows Virtual Desktop service won't handle, this new release is a useful update.

Parallels Toolbox: The ultimate software utility for Windows 10 and macOS

How to become a network administrator: A cheat sheet (TechRepublic)