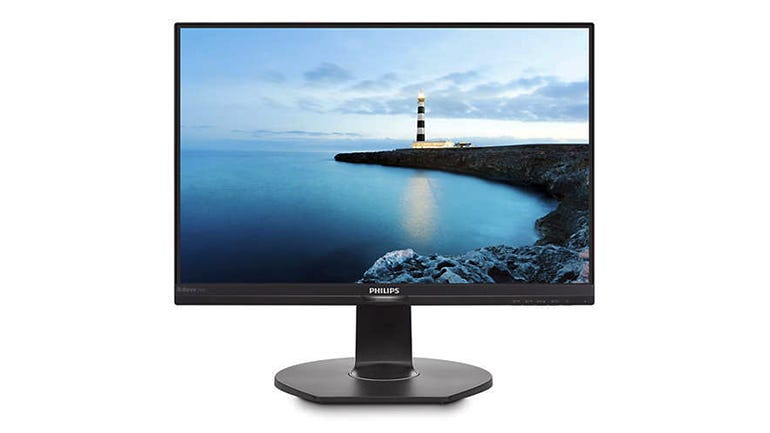 The Philips Brilliance B-line 240B7Q with PowerSensor technology aims to save businesses money by switching to low-power backlight whenever a user is not detected within a set distance from the screen.

A 24-inch,16:10 aspect ratio IPS display, the 240B7Q has a White LED backlight and a 5ms (GtG, or grey to grey) response time. Its native resolution is 1,980 by 1,200 at up to 60Hz refresh. It provides VGA, HDMI and DisplayPort video inputs with daisy-chain support on DisplayPort. Philips offers a three-year warranty. A full features and specifications PDF leaflet is available on the Philips website.

The two-piece pedestal provided with this monitor has four degrees of freedom -- twist, height, tilt and clockwise-only rotate -- and offers entirely tool-free assembly. The upright has a hook-over tab at the front that locates in the baseplate and is locked in place by a screw fitted with a folding thumb tab at the rear. The square mount at the top of the upright drops into a recess in the back of the display panel, with hook tabs and sprung catch to lock it in place. The recess in the panel also has four bolts for VESA mounting.

Apart from the four-port USB 3.0 hub located just behind the left edge of the display, connections are mounted on a downward-facing ledge along the back. Viewed from the back, from left to right these are HDMI 1.4, DP-in (DisplayPort) 1.2, MiniDP-in, D-Sub VGA, DP-out for daisy-chaining and two 3.5mm jack sockets for audio in and headphones out. The IEC mains and a power rocker switch are separated from these I/O connections on the far left.

Five edge-mounted buttons near the bottom right corner of the display are identified by rather small and cryptic white icons printed above them. The first button accesses the Smartimage menu and doubles as a menu exit button when any on-screen menu is activated. The Smartimage menu offers choices for Office, Photo, Movie, Game, Economy, LowBlue Mode and (Smartimage) Off. Movie is the bluest setting, while the LowBlue mode, of course, considerably reduces the blue level.

The next two buttons act as up and down navigation buttons whenever an on-screen menu is already displayed. Otherwise the down button doubles as the activator for the input selector menu and the up button for the PowerSensor setting. The fourth button selects a general menu that covers all the user settings, including those already mentioned. A fifth button is the power on/off and a small white LED in the bottom right corner of the bezel indicates power status.

Most businesses today are looking at ways to be more energy efficient, and the Philips PowerSensor technology is intended as a power-saving feature.

PowerSensor uses two IR sensors located in the center of the lower bezel to sense the presence of a user and reduces backlight power when a user isn't in front of the display. It offers a four step setting -- 0 for Off, 1, 2, 3 and 4 as displayed on a horizontal menu bar. At the 1 setting, distance sensing is about 50cm. At 2 this distance increases to perhaps 70cm and at 4 it's at around 85cm. Philips says that the backlight power saving can be up to 80 percent. It operates on a timer, so the backlight dims about 60 seconds after the sensor signal is lost, but returns to normal as soon as the sensor 'sees' a user.

We measured the power consumption and, following a reset to factory settings, obtained a reading of 21 Watts in normal operation. This dropped to 9W when the backlight was dimmed by the PowerSensor technology. A drop of roughly 57 percent. According to the manufacturer's specifications the typical operating power draw is 16.1W, but power draw is dependent on the brightness setting.

According to Philips, Smartimage is an active technology that analyses the content displayed on your screen and dynamically enhances the contrast, colour saturation and sharpness of images and videos for ultimate display performance.

While the average user probably doesn't think about colour balance at all, and will only comment if display colour balance looks very obviously off, professionals such as graphics designers, photographers and videographers will want direct control over colour calibration, rather than have a system that is constantly readjusting the balance according to image content. Although Smartimage can be turned off and discrete colour controls are available, the menu structure makes it difficult to set colour calibration.

It's therefore hard to say how useful the Smartimage feature actually is, particularly as it isn't completely automatic: the user has to choose an image profile such as Office or Movie.

The so called blue filter modes offered today by many display manufacturers are in response to news stories that 'blue light from LEDs will make you go blind'. The truth is that the shorter wavelengths of light are higher energy relative to the longer wavelengths, and so will have a greater effect on the human body (sunburn anyone?). Any source of light containing frequencies at the blue end of the spectrum -- including normal daylight -- can cause slow degradation of the human eye. The blue 'filter' mode on many displays -- Philips' is called LowBlue Mode -- simply reduces the blue channel gain so the white balance is very 'warm'.

Basic setup instructions are provided on three paper sheets and the multi-language user guide is on a CD. Also supplied is the pedestal stand.

The styling of this Philips display is crisp and clean. Constructed of 85 percent recycled plastics and PVC, BFR-free, the housing of the 240B7Q is mainly textured black with silver metallic highlights on the pedestal. A brushed black aluminium strip underlines the lower bezel and carries unobtrusive legends for the user controls. At 16:10 the aspect ratio is still wide screen, but since it easily displays two A4 pages, it's better suited to business use than the common 16:9 ratio. The 100V to 240V built-in power supply makes for tidy installation.

Like many of the IPS panel displays on the market today, the Philips 240B7Q provides a bright sharp picture with good uniformity and wide viewing angles. The A energy rating and PowerSensor technology are perhaps strong selling points for the business community. While the Smartimage feature might seem like a good idea, in practice it's difficult to say how useful it is.