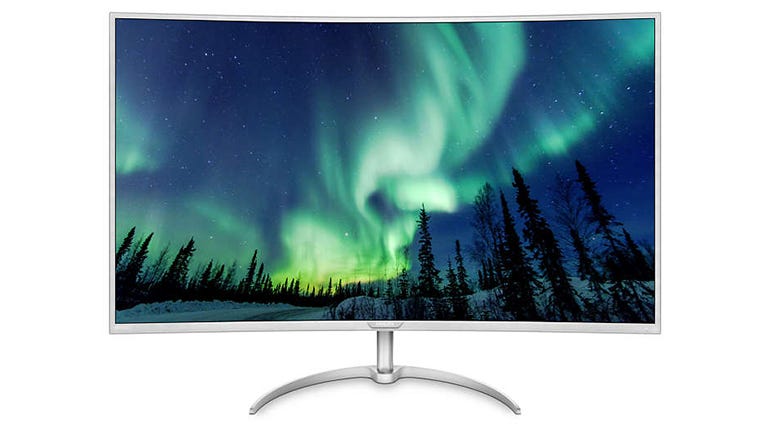 Picture in Picture (PiP) and Picture by Picture (PbP) modes

With two video signal sources plugged in, one of those sources can be allocated a variable size PiP picture window within the display, or the two sources can be displayed side by side in PbP. With four sources, the display can be divided into four areas of equal size. The menu for these modes is accessed by clicking 'up' on the rear-mounted joystick for a selection of PiP, PbP two-window, or PbP four-window. Control over these picture modes is also available via right-clicking for the main OSD menu and selecting PIP/PBP.

Rather than the usual black, the design palette for the Philips BDM4037UW is a subtle glossy warm-white/grey-white two-tone on the back, combined with matte silver on the bezel and pedestal. Detailing is kept to a minimum: the only status indicator is the small white LED at the right bottom corner of the display, and the only user control is the small joystick on the back of the enclosure just above the LED. The BDM4037UW has a fairly narrow matte silver bezel (19mm wide along the bottom and 12.5mm along the other three edges) that extends right up to the active screen area.

A simple two-piece pedestal, with only a tilt adjustment, is provided with this monitor. Assembly is tool free. A dog-leg post hinges from the back of the display enclosure, to which a crescent foot is attached by a screw fitted with a folding thumb tab. Both parts of the pedestal are of aluminium alloy finished in a matte silver surface treatment. Four threaded holes in the back of the enclosure are provided for VESA mounting.

All the sockets for the BDM4037UW are mounted flat on the back of the casing, grouped around the holes for the four point VESA mount, so all connectors and cables extend at right angles to the back. Viewed from the back, from left to right, the signal connections are: two MHL-HDMI (one 1.4 and one 2.0), two DisplayPort connectors (1.1 and 1.2), one VGA port and two 3.5mm stereo jacks, one for audio in and one for headphones out.

A four- port USB 3.0 hub is arranged vertically, next to the audio connectors. A stereo pair of built-in loudspeakers output audio from a built-in 5 by 5 Watt amplifier, through downward firing grilles along the bottom edge of the display.

Mains power connection is via an IEC320 C5 'clover leaf' cable. There is no dedicated power switch, either touch or mechanical, although holding down the rear-mounted menu navigation joystick for longer than three seconds will turn the BDM4037UW off. A brief click on the joystick will turn it back on. Power status is indicated by a small white LED located at the bottom right of the bezel.

As is all too often the case with today's digitally controlled devices, the on-screen menus are extensive, with 90 choices distributed over three levels. Navigation is via a small 4-way joystick mounted on the back of the display, behind the bottom right corner. Bending the joystick up opens the display mode menu for PiP and so on; bending to the left opens the SmartImage menu, to the right opens the main menu, while the downward bend can be user-assigned as a menu favourite. Once any on-screen menu is opened, up and down clicks move through the possible selections on that menu level. A right click moves deeper into the menu levels, while a left click backs out. Variable settings are adjusted using up and down clicks for increase and decrease. This one-finger/one-control approach is certainly an improvement on five separate rear-mounted buttons.

The BDM4037UW does not have a so-called 'Blue filter' or LowBlue mode. If required, users can simply set a colour balance with reduced blue gain.

Like a number of recent displays from Philips the BDM4037UW incorporates Philips SmartImage. This is an active technology that Philips claims analyses the content displayed on your screen and dynamically enhances the contrast, colour saturation and sharpness of images and videos for ultimate display performance. Many may feel that a 'smart' feature that still requires you to choose from six possible settings -- Office, Photo, Movie, Game, Economy and SmartUniformity -- isn't actually that smart.

Photographers, videographers and designers who calibrate their displays and want stable colour might consider using the SmartUniformity setting, which is intended to reduce brightness variations across the display area. Philips provides a factory calibration sheet for this mode with each display and states that it improves brightness uniformity to better than 95 percent.

Four signal cables are included: a DisplayPort cable, an HDMI cable, a VGA cable and a 3.5mm stereo jack audio cable. A 3-pin UK mains cable is also included. Basic setup instructions are provided on three paper sheets and the multi-language user guide is on a CD.

Like all vendors of curved displays, Philips claims "a more immersive experience" for the BDM4037UW, but the claims made so far for curved displays are unconvincing. As we discussed in our recent article 'Curved ultrawide displays coming to a desktop near you', it's hard to say whether a display of this size really makes sense on the desktop because, at typical office desktop viewing distances, it more than fills the 60 degrees of the central visual field. Image quality and colour gamut from the VA panel are good, but not as good as many IPS displays.

Curve aside, this large ultra-wide display with its MultiView feature is perhaps best suited as an alternative to a multi-screen setup. It might also find a place in boardrooms, where it could serve as a display for video presentations or video conferencing. The white and silver styling of the BDM4037UW is a good match for Apple products.