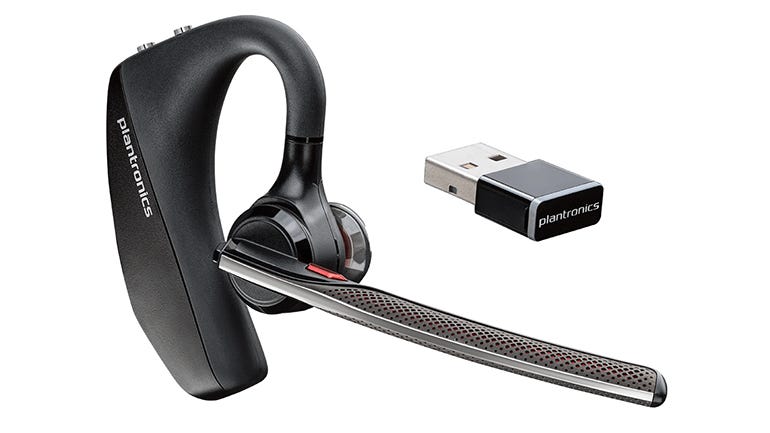 Plantronics has been making wireless headsets successfully for a while, and I have to come clean and say I'm a long-time user. Other brands have come and gone, but I always seem to end up with a Plantronics headset. So the company's new Voyager 5200 UC naturally piqued my interest when it landed on my desk.

This is a one-ear device with an over-the-ear fitting. As a glasses wearer I can find these a bit uncomfortable, but there was no problem of that sort here. In fact, I often forgot to remove the headset when leaving the desk (Note to self: popping to the shops wearing this kind of kit is not a good look!). However, it's something struggle to get the headset on -- I needed two hands to get the job done.

If, like me, you find that in-ear buds can slip about a bit, then you'll appreciate the Voyager's flexible rubbery cones -- three different-sized buds are provided. The microphone section rotates around 180 degrees, as does the ear fitting, so everything works for both left and right ears.

Pairing via Bluetooth and NFC was easy. Like other Plantronics Bluetooth dongles, this one has a blue strip light around its top when the connection is live. It's really irritating, but at least it reminded me to turn the headset off when I'd finished with it to help conserve battery life (more of which later).

It took under ten minutes to set up the Voyager 5200 UC for use with my laptop for dictation into Nuance's Dragon Professional. I also paired the headset with my phone to take and make voice calls. If you give it access to your contacts book, it'll announce who is calling and ask if you want to 'answer or ignore'. Say 'ignore' and the call is declined. I barely needed to glance away from all important tasks to get rid of unwanted callers -- much easier than handling the phone to complete the same task.

People on the other end of calls said my voice was really clear, and previous experience suggests Plantronics' WindSmart noise cancelling system is very good. There's a mute button on the microphone so that callers don't have to hear everything you say and two small buttons on the top of the ear hook make it easy to adjust volume. I had no trouble with dictation quality into Dragon, so presumably it heard me loud and clear too.

Battery life isn't great. Plantronics says the headset delivers up to seven hours, but I think it's likely to be less than that in the real world. Certainly I felt the need to charge every couple of days. Fortunately, I was sent the hard shell 'charging case' accessory. This provides an additional 14 hours (by Plantronics' reckoning), making it ideal for anyone who needs to carry their headset around. It has a slot for the (slightly large) Bluetooth dongle and a little integrated charge stand which you can use when the case is closed. I couldn't track down any UK pricing, but it costs around $40 in the US.

Speaking of pricing, at £114 (inc. VAT) the Plantronics Voyager 5200-uc might seem fairly expensive. It's not the smallest or most discreet device, and its battery life could be better, but anyone wanting to mix mobile and deskbound wireless voice communications in a single device should give this high-quality headset a look.