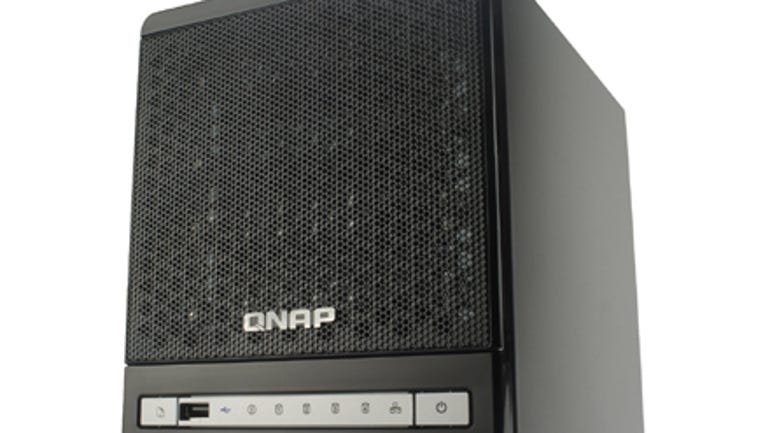 The old adage "good things come in small packages" certainly applies to the QNAP TS-409, a silver and black cube whose small dimensions sport a raft of features.

For the SOHO market, the TS-409 is a veritable jack of all trades, not only can it store your data — up to 4TB no less — it can also act as your Web Server, FTP Server, Backup Server, Print Server, iTunes Server, Network Broadcast Server (TwonkyMedia), BitTorrent Download Station. You can even use your PS3 or Xbox to play multimedia content stored on the server.

The network attached storage's (NAS) grunt is provided by a Marvel 5281 500MHz processor with 128MB of DDR2 RAM and 8MB of Flash for the Linux OS booting.

Performance
Initially the TS-409 was configured as a single drive NAS with a WD10EACS 1TB SATA drive. We then migrated the NAS to two drives in a mirrored configuration and then finally to three identical 1TB drives in a RAID 5 configuration to substantiate the vendor's claims of ease of use and upgrade.

Basic performance of the NAS was determined by copying large test files to and from the NAS in the final RAID 5 configuration. The files copied in the first test included a folder containing 3,527 files in 392 folders totalling 2,216,601,097 bytes. In the second test, the above files were zipped to create files totalling 1,386,110,120 bytes.

The basic ease of use of the hardware and Web-based user interface were also assessed.

Design and features
At a glance, the TS-409 thermal dissipation is excellent. The entire front of the unit is a mesh door that provides access to the drive cradles with excellent airflow. The rear has a large "smart" thermally controlled fan that provides steady airflow at very low volume levels.

While testing the unit on our desk the noise level never became intrusive. The drive cradles are spaced 1.5cm apart and so provide broad channels to again promote airflow between the drives.

Usually NAS devices at this price have limited security features. The TS-409 required the administrator to set up Users, Groups and Share Folders, but in addition has IP filters, SSH secure remote log-in, Secure FTP, FTP Policy Control and encrypted remote replication; very handy features indeed. There is also a Kensington Lock point on the rear of the case.

Given that this NAS will probably be kept on a desk or bookshelf rather than tucked away in a server room, the front panel displays status indicators for power, LAN, USB, individual drive activity and USB activity.

There is a single USB port at the front and two at the rear and, in conjunction with the front "One Touch Copy Button" (OTCB), a digital camera or other USB mass storage device can be backed up by simply pressing the copy button. The OTCB can also be configured to copy in the other direction from a directory on the NAS to some form of external USB backup drive.

The Web interface has surprising functionality and depth, but at times it can take a couple of tries to actually find the function or features you wish to tweak. Once you get used to the menu structure things run a lot more smoothly, and we were able to carry out the single drive to mirrored then up to three disk RAID 5 configurations.

It does take quite a while for the TS-409 to build the relevant array after a migration, therefore we recommend running the function overnight so that way the array will be configured by the following morning.

The performance of the TS-409 was not remarkable, but it was certainly acceptable when you take into account its target audience. Be aware that the TS-409 is supplied as a "bare bones" NAS and it is up to the purchaser to populate the unit with the drives of their choosing.

Verdict
At just $729 for the TS-409 it is reasonably priced given the extensive feature set, but you need to populate the NAS with drives. We used Western Digital 1TB RE2 drives at an RRP of $399 each giving the storage device a total cost of AU$1,527.

When you take in that the TS-409 has the ability to also function as your print, Web and FTP server, amongst its many abilities, the price becomes much more attractive. Performance is not at the high end — but for its target market, the performance is more than adequate.

There are two versions of the NAS: the TS-409 and the TS-409 Pro (RRP $799) where the Pro features additional business features. The Pro has more extensive reporting features and the ability to import users from Windows Active Directory to streamline the set-up process.