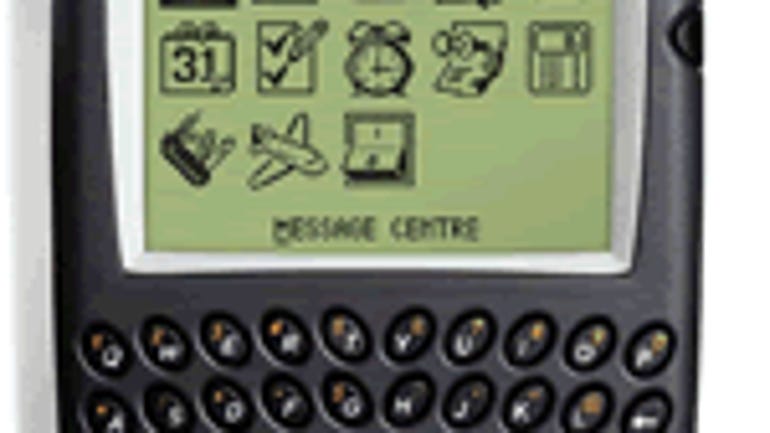 The BlackBerry, launched in the US in January 1999, has been long awaited in the UK. It has finally arrived thanks to a deal between hardware manufacturer RIM (Research In Motion) and mmO2 (formerly BT Cellnet). Its main selling point is access to email and SMS messages over mmO2's GPRS service, and its main target group is busy corporate executives who need to keep in touch with the office at all times. In the US, private individuals can be BlackBerry owners, but in the UK -- for the moment at least -- this is a device for corporate users only.

The BlackBerry integrates with corporate email systems like Microsoft's Exchange, and requires additional server software to sit behind the company firewall, sending emails securely over the Internet. The device itself runs a proprietary Java-based operating system.

BlackBerry would probably fall down fast if it were just a text messaging device, so it also includes the kind of applications any handheld owner will be familiar with. There's a contacts manager, an appointments diary and a To Do list -- and synchronisation of these with Outlook is possible. An alarm applet and a clock are also on hand, along with a memo pad and a calculator. The device comes with desktop tools, and has 8MB of flash memory for storing additional applications -- a quick Web trawl revealed an array of utilities, productivity tools and, inevitably, games.

There are few bells and whistles as far as usability is concerned, the emphasis being on utility rather than showiness. The display is monochrome and not touch-sensitive, and there's a backlight for occasions when reading is difficult. Instead of an army of application shortcut buttons adorning the front and sides of the casing, there's just a jog-dial button and a separate 'escape' key to move between applications and make menu selections. The icon-driven main menu is easy to get to grips with, and once you're past this, the interface involves simple text-based lists rather than graphics-rich designs. The range of options within applications is serviceable rather than lavish.

This is all well and good, but there are some drawbacks that reduce the BlackBerry's appeal. Its PC connection is serial rather than USB, and battery charging requires the docking station, because annoyingly the power supply connects to the serial plug and not the device itself. The battery, incidentally, lasts for about three days between charges. There is no infrared port, so it's difficult to share information with colleagues unless you forward it to them via email. And there is no provision for voice communications, although we gather that adding this for the UK market has not been ruled out.

The keypad, which sits beneath the display, is a mixed blessing. It's fine for composing SMS messages and short emails, but everyone except the most nimble-fingered will have difficulty writing long messages or screeds of text on the memo pad. This is a constraint of device size as much as anything else -- the BlackBerry has the dimensions of a normal handheld (7.85cm x 11.7cm x 1.8cm) and weighs 139g.

The BlackBerry appears to be proof that a mobile communications device doesn't need high-tech bells and whistles in order to succeed. Whether the delay in bringing it to the UK will harm its prospects now that a number of GPRS-based 'convergence' devices are available remains to be seen, however.