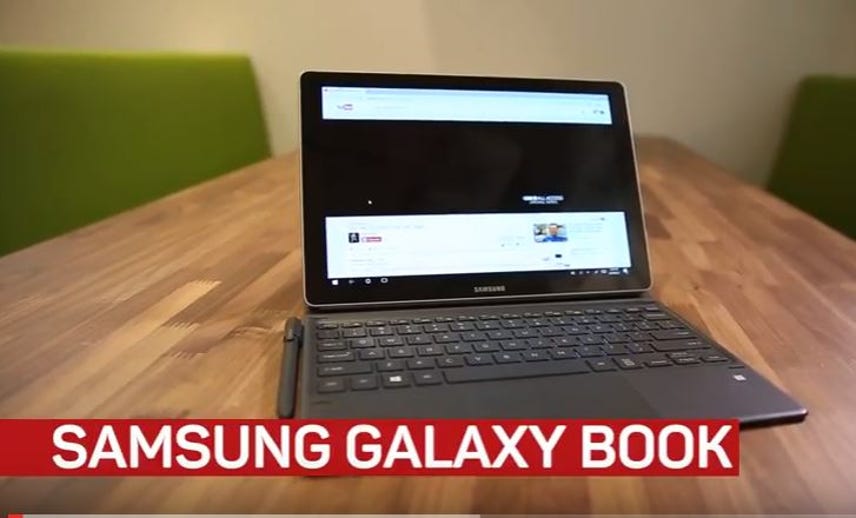 It's been more than a year since I started using a Microsoft Surface Pro 4 as my primary home office computer and it has gone on every business trip since it arrived.

After years of just letting computer makers put out hardware with its software, Microsoft set the bar for a compelling portable computing experience with the Surface Pro line. We now see manufacturers launching direct competitors and the latest is Samsung with the new Galaxy Book line.

I've been testing out one of the Galaxy Book 12 inch models with 8GB of RAM and a 256GB hard drive and WiFi radio since last Thursday. Since I've only spent a few days with it, I don't feel justified in posting a full review at this time.

As you can see on the Samsung website, there are 10 inch and 12 inch models with various RAM and internal storage options. Prices range from $629.99 to $1,329.99, including one variant that has a Verizon LTE radio. All models include the S Pen stylus and full folio hardware keyboard, which is something that Microsoft should seriously consider since the Surface Pro is really not a complete solution without a Type Cover.

Specifications for the unit I tested, model SM-W720NZKAXAR

Samsung makes some great hardware and the Galaxy Book is actually just a bit thinner than my Samsung Galaxy S8 Plus, which measures 8.1 mm.

The Samsung Galaxy Book has a bit more refined fit and finish than the Surface Pro 4 with rounded corners that form nicely into the edges and around to the back. The Surface Pro 4 has more angles and flat surfaces.

Samsung makes fantastic displays and the 12 inch Super AMOLED looks excellent. The Surface Pro 4 display is 12.3 inches and has a higher resolution, but it is tough to beat the blacks of Samsung's AMOLED.

Watching movies on the display is a great experience and the dual stereo speakers mean you can enjoy video content without having to plug in a headset too.

A major difference between the Samsung Galaxy Book and Surface Pro 4 is the availability of ports. There are two USB Type-C ports on the Galaxy Book, similar to the trend we are seeing with Apple's new laptops. You can use either port to charge or connect USB Type-C cables. Adaptive fast charging is supported so you can get a full charge in less than three hours. I figured there would be adapters in the retail package for USB, but there is such an adapter included with the new Samsung Galaxy S8 so if you have that phone then you can use it with the Galaxy Book.

I never use the rear camera on my Windows computers and haven't had the chance to test this one out yet either. The front camera works well for video calls with Skype.

The hardware QWERTY keyboard is included as part of a folio case. It connects via pins on the bottom of the Galaxy Book and includes backlighting. The keyboard has about the same spacing as the Surface Pro 4 Type Cover with a smaller trackpad. Feedback is about the same so it is really a toss up as to which is the better keyboard.

One feature I love on my Surface Pro 4 is the ability to pop out the lower rear and adjust the angle of the device. The top cover of the Galaxy Book folio folds to support four different viewing angles. It is fairly solid and can be used on a lap, but may collapse with too much motion.

The Galaxy Book comes with a S Pen with a single button on it. Hold the button and hover over the display to launch Air Command, much like what we see on Galaxy Note devices. Unlike the Surface Pro 4 pen, there is no top button and easy way to launch an app via a Bluetooth connection.

The Samsung Galaxy Book I am testing runs Windows 10 Pro, although all of the models I see on the website shows Windows 10 Home. There are several apps and games installed out of the box, but they can be removed too if you don't want them on the device.

There is a Samsung settings area where you can adjust a few settings for the S Pen, battery life extender, AMOLED display settings, and pattern log-in.

Samsung Notes is installed and appears as one of the Air Command options so you can quickly capture notes with the S Pen.

Samsung Flow is also installed and lets you pair a Samsung Galaxy smartphone to then login through your phone, quickly connect to your phone as a hotspot, and sync notifications between your phone and the Galaxy Book. If you are deep into the Samsung ecosystem, then you may want to consider the Galaxy Book to keep everything in sync.

The unit I tested is priced the highest at $1,329.99 and it comes with the S Pen stylus and the hardware keyboard folio. The equivalent Surface Pro 4 is priced at $1,199 without the keyboard so when you add in a Type Cover you are at about the same price.

There are lower priced 10.6 inch models, but overall the Galaxy Book is about the same price as the Surface Pro 4 line so you will need to find another reason to purchase one.

If you use your computer as a tablet for an extensive period of time, then the Samsung Galaxy Book is a solid choice. It feels better in the hand for tablet use compared to the Surface Pro 4, but without the keyboard folio there is no way to prop it up.

Last year I tested out the Samsung Galaxy TabPro S and the new Galaxy Book bests that computer with a microSD card and a secondary USB Type-C port.

There is no Windows Hello face authentication support and there are limited angles that require you use the keyboard folio so it is tough for me to understand why one would choose the Samsung Galaxy Book over the Surface Pro 4 unless you are simply a fan of Samsung hardware and AMOLED screens.