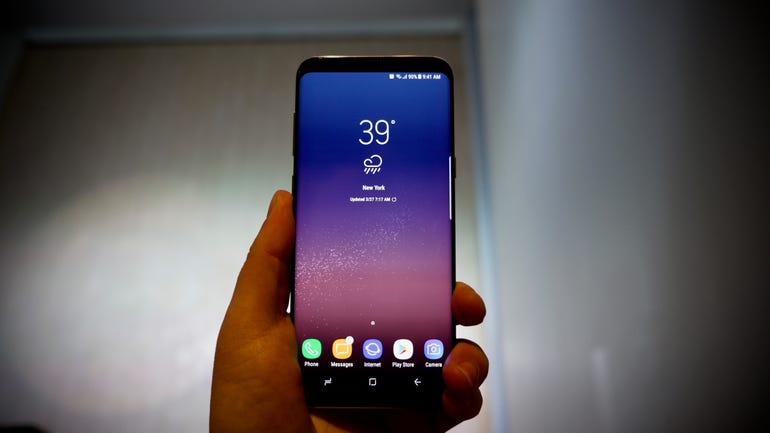 How does a company shake a global recall of a high profile product? If you're the world's biggest smartphone maker, you keep doing what you know -- tweaking, innovating, improving and building the very products that lead to success.

Samsung could have taken the easy route, slightly changing the modern S7 design while it regrouped. Instead, Samsung pushed the smartphone narrative forward with the Galaxy S8.

After using the Galaxy S8 for almost a week, one thing is abundantly clear to me: Apple is now in a position of playing catch-up when it comes to design and features.

From design follower, to design leader

Apple has, for years, been considered the leader in the design of smartphones, setting the standard for the entire industry, and Samsung spent years copying those designs. At times, Samsung's devices were a blatant rip-off of Apple's hard work.

For the past few years, Samsung has slowly moved away from following Apple's lead, finding its design prowess. We had the first glimpse -- quite literally -- when the Note 7 launched.

However, with the Galaxy S8, Samsung has set the bar for all smartphone makers in 2017. Ditch the bezels, increase screen size, and get rid of the camera bump for good.

I can already hear Apple pundits crying foul in regards to that statement, finding fault with the fact that the various ports and holes dotting the edges of the S8 still aren't lined up; but it's a tired narrative and needs to end.

Apple takes the time to ensure all of the ports line up perfectly and it does look nice. That said, I find it frivolous to discount an entire device based on the alignment of ports.

Speaking of ports, on the bottom of the Galaxy S8 is a 3.5mm headphone jack, a USB-C port, and a lone speaker grill. It's unfortunate the S8 doesn't have stereos speakers, especially considering Samsung's continued approach powering Gear VR with its flagship phones.

The right side is home to the lone power button. The top of the phone has a SIM card and microSD tray. The left side is the busiest, with a volume rocker and the dedicated Bixby button.

Samsung's physical home button is gone, replaced by a pressure sensitive digital button that appears and disappears depending on what you're actively doing on the phone. At any time, you can press where the home button should be to activate and use it.

My first day of using the S8, I consistently struggled to find the sensor with my left or right hand. And when I did find it, I failed to line up my finger to get an accurate reading to unlock the phone.

After about three days of use, finding the sensor became second nature, and now I hardly encounter issues unlocking the phone with my fingerprint.

It's an adjustment that users will fret over for a few days, and then any reservations will go away.

It's all about the (lack of) bezels

Due to the S8's taller 5.8-inch display and odd 18.5:9 aspect ratio, the phone is narrower and easier to hold with one hand than Apple's iPhone 7 Plus, despite the S8's bigger display.

Placing the iPhone 7 Plus next to the Galaxy S8, the iPhone's design instantly looks dated, as does the LG G6's box-like design The curved edges serve two purposes. First, they look good. Second, they make the phone fit comfortably in the palm of your hand.

Previously, I noted my switch from the smaller 4.7-inch iPhone to the 5.5-inch iPhone 7 Plus. I was hesitant in the past to make the switch due to just how big the Plus size iPhone is. The bezels of the iPhone 7 Plus, making room for sensors and the home button, are to blame for its gigantic size.

Rumors indicated Apple is planning to follow Samsung's lead by trimming down the bezels and potentially moving the fingerprint sensor to the back of this year's iPhone -- all things Samsung has already done and has in customers' hands.

Drill down into the settings app, and you'll be hard-pressed to find a single reference to Samsung's longtime proprietary Android skin, TouchWiz.

The lack of TouchWiz references isn't new, as Samsung has slowly moved away from a term associated with overbearing changes and features.

As Samsung's focus on design has increased, its focus on making substantial software changes has decreased. Starting with the Galaxy S8, any alterations made to Android are considered part of the "Samsung Experience." Specifically, the S8's settings menu lists Samsung Experience 8.1.

The Samsung Experience includes a new launcher, ditching a button dedicated to opening the app drawer and giving users the option to abandon the app drawer altogether (going with an iOS-like home screen with every app on display).

There are still some changes Samsung makes to Android that seem more confusing than they are helpful. For example, a long-press on an app icon displays a popup menu to uninstall or put an app to sleep, instead of Android 7.1's quick actions shortcut. How is Samsung going to reconcile the two interactions when the S8 is updated to Android 7.1?

In spite of quick actions, the overall changes Samsung has made to Android have added to the experience, instead of completely distracting from it as has been the case in the past. 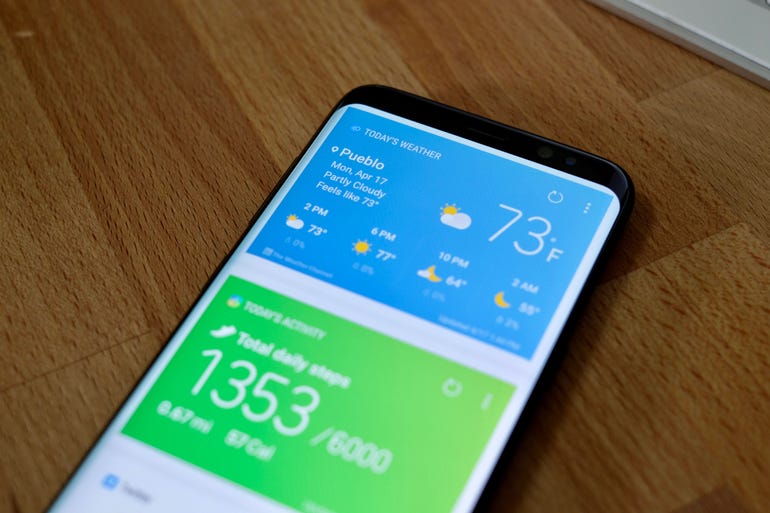 As Samsung announced last week, the company's personal assistant isn't quite ready. At launch, the S8 will have Bixby Reminders, Home, and Vision. Voice, arguably the most important aspect of the feature, will arrive via an update later this spring.

Bixby Home is a feed of information and services such as your daily agenda, contact and app recommendations based on time of day, news updates (pulled from Flipboard), and Samsung Health data.

The Home panel is accessed through a quick press of the Bixby button, or by swiping to the right on the S8's home screen. In my testing, Home has been slow to open and buggy.

However, Samsung updated the Bixby app while I was writing this review and in the short amount of time since installing it, the lag seems to have been fixed. Notwithstanding its sluggishness to open, Home has presented helpful information, with minimal interaction on my part.

Bixby Vision uses the camera to scan objects, giving you shopping results via Amazon, translate or extract text, and identify landmarks. I used Vision a few different times, and it correctly identified various items like a coffee mug, down to the color, along with an iPhone 7 Plus and provided Amazon listings for screen protectors and cases for it.

It's frustrating and unfortunate Bixby isn't ready. Samsung included a dedicated button for the service, and right now that button is crippled. When Bixby Voice is released in the US, a long press on the button will prompt the phone to wait for commands such as "Text my wife" or "What's the weather like?"

As disappointing as it is for Bixby Voice to be missing right now, delaying a product that isn't ready is the right move by Samsung. I'd rather have a product that's available for use than try to use something that's nowhere near ready.

In the US, Samsung continues using Qualcomm's Snapdragon line of processors. For the S8, the Snapdragon 835 is making its debut.

Outside of the slowness, I experienced when launching Bixby Home -- something I'm fairly sure is a software issue -- I rarely experienced any sluggishness or slowing on the S8.

One aspect of using Android devices I've learned to live with is some stuttering when quickly scrolling through the Facebook app or my Twitter feed. From the Google Pixel to the Galaxy S7 Edge to the LG G6, a stutter while scrolling, no matter how small, is always present.

With the S8, I have yet to notice any scrolling stutter.

Battery life has been mixed during my testing. One day my review unit would run low on battery by mid-afternoon, other days I would go to bed with 40-percent of charge left. Part of my experience is due to receiving a T-Mobile unit, which has almost no coverage where I live, so the phone is repeatedly searching for a signal, impacting the battery.

As for the new iris scanner and facial recognition features, I didn't use either one all that often. I found it faster to put my finger on the sensor as I removed the phone from my pocket, instead of lifting up the S8 and waiting for it to scan my face.

On the days during testing when I wore a baseball hat facial recognition was slower than it was without one. On days when I wore glasses instead of contact lenses, iris scanning all but quit working.

While it's fun to advertise either one as a positive feature, fingerprint unlock continues to be the quickest and most reliable method to unlock the S8 using biometrics; especially for those of us who wear glasses.

Samsung left its rear camera unchanged, instead relying on software processing improvements to provide better image quality. I'm not sure the S8's camera is noticeably better than the S7, and that's not a bad thing. The camera on the S7 was already one of the best in a smartphone. 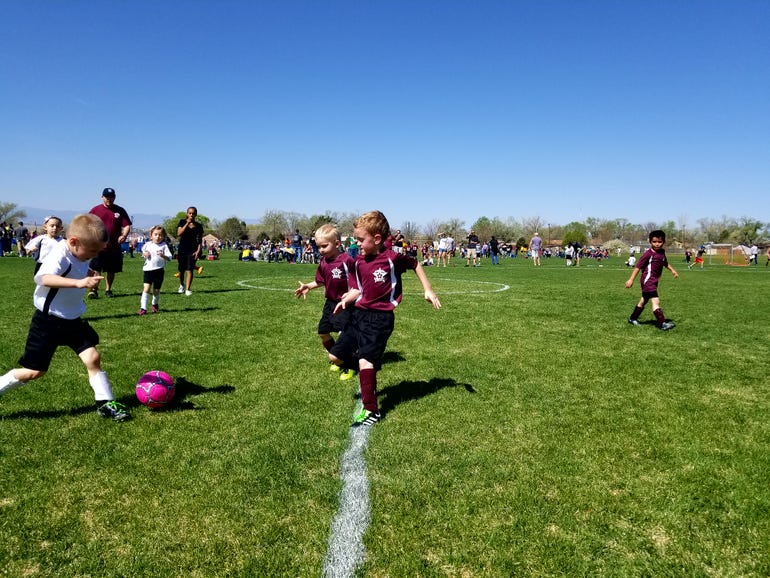 I captured the above photo with the S8 during my son's soccer game. After holding the phone, ready to catch my son as gameplay came near the sideline where I was sitting for several minutes, I eventually put the phone in my lap.

Later in the game, as I realized the ball was heading towards me with my son right behind it, I double-pressed the power button on the S8 to open the camera, lifted it up, and pressed the shutter button. I didn't focus, let alone frame the shot at all, and the result was the above photo.

The entire picture is in focus, has virtually no motion blur (they were running, after all) and required zero thinking on my part. The speed and ease of which I snapped that picture left me impressed.

The front-facing camera is 8-megapixels and has auto-focus with facial recognition. 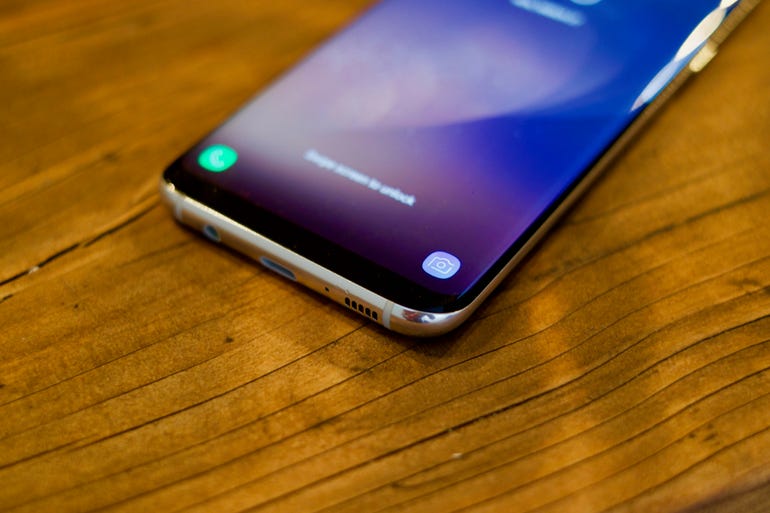 The standard is set.

Between the hardware design, software tweaks and services such as Samsung Pay, Samsung has not only put the Note 7 fiasco firmly in its rear view mirror, but it's passed every other smartphone manufacturer.

The Galaxy S8 is as close to a perfect smartphone as you can get. The fingerprint sensor is accurate, but the facial tech is still a work in progress.

Samsung's new less-is-more approach to software is welcomed, though some changes are still confusing. And launching a flagship device without its flagship software feature is a huge miss.

Even with its imperfections, Samsung's Galaxy S8 is the best smartphone money can buy right now. And unless Apple surpasses everyone's expectations later this year, it likely will continue to be for the foreseeable future.