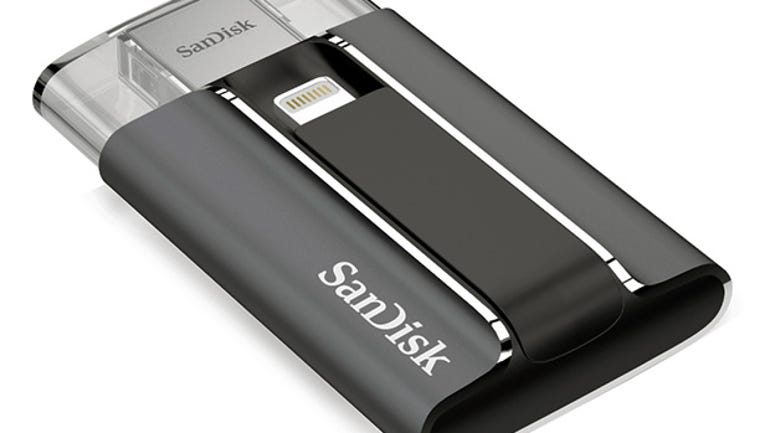 Thanks to the Lightning connector, you can't just plug a Micro-USB OTG drive into your iOS devices the way you can with Android phones and Windows tablets. You need a drive with the Lightning cable like the SanDisk iXpand, which is now available as a 128GB model, and with extra security options.

This is an unusually wide flash drive (about twice the width of most USB sticks) to make room for the internal battery, with a rubbery Lightning cable on the side and a clear plastic cap for the USB connector that's almost guaranteed to get lost (you can't snap it on to the other end of the drive, so expect to leave it on a desk at some point).

Unlike USB drives on other platforms, you have to install an iOS app before you can use it -- you get prompted to do that when you first plug in the drive, and you get prompted to allow it to run when you plug it in again (you might also get prompted for feedback, which is intrusive when you're in a hurry to copy a file). It might feel odd to Windows users but with no built-in file manager you need an app, and this one comes with some useful extras -- like automatically encrypting files using Touch ID. Ignore the startup guide that says you have to set that up on a Mac or PC first, so you can give it a password: you can create the Vault from the Settings menu in the app (and you can also give the drive a name there too). The password is for opening the Vault folder on devices that don't have Touch ID (including older iOS devices where you have to type the password every time you open the Vault folder).

The Settings menu is where you can backup and restore your iOS contacts and turn on automatically syncing your camera roll to the iXpand drive. But it's also one half of the slightly strange file transfer process -- because unlike other platforms, you don't get to browse your iPhone or iPad to copy files back and forth.

The iXpand app opens to the file manager, where you can play music and videos (WMV, AVI, MKV, MP4 and MOV formats, which is more than iOS usually supports), read PDFs and simple Office documents, browse through photos and see them as a slideshow, either as previews or full screen (with a near-invisible back button in the top corner). To do anything else, you tap the 'Outbox' icon to get the familiar iOS sharing panel; from there you can send files as messages or email, choose from a limited selection of other apps to open files in (so we could save a music track to OneDrive, but not open it in the iOS Music player), lock them to move the into the vault, print them if they're a printable file, move them to another folder -- or save to My Downloads, which copies them onto your iOS device.

How useful that is depends on the kind of file you're dealing with.

Copy an image and it goes in the camera roll, where you can treat it like any other picture on your iOS device. But if you copy a video or a Word document into the My Downloads area that iXpand makes on your iPad, you can't see it from anywhere else on your iPad -- not even the Apple videos app or the Word app. Want to watch the video you copied from the iXpand drive? You have to open the iXpand app, look in My Downloads and watch it from there -- so the only reason to copy the file to your device at all is if the iXpand is about to run out of battery. To be fair, that's a limitation of iOS, but it does make the iXpand less useful.

To edit Office documents that are on the iXpand drive, you have to turn on the selection mode in the iXpand file manager and select the file (that's the only way to get the icons that let you work with the file); then you can use Open In to pick Excel, Word or PowerPoint, which lets you see things like Smart Art and the other tabs of your spreadsheet (which you won't see in the iXpand document preview). That's convoluted enough, but to view Office files you've copied onto your iPad, you have to launch the iXpand app, choose My Downloads from the Setting menu, switch into selection mode and then send the file to the Office app you want. It's far easier to get a free OneDrive account and access your Office files that way. The iXpand also doesn't cope with large files: it wouldn't preview our 17MB test Office document, and when we switched to selection mode it didn't let us open it in the Word app either.

Copying files onto the iXpand drive is much easier: tap the plus button at the bottom of the interface to get a file picker where you can select multiple files and choose which folder to put them in on the drive.

File transfer isn't that fast, even for a USB 2.0 drive. It took less than a minute to copy just over 500Mb of photos onto the iXpand drive, and we didn't notice any stutter or lag when playing back videos and music. The tiny transfer light on the side that blinks to warn you not to pull the cable out while files are copying across is hard to see when plugged in, especially on an iPad. It's also the charging and low-battery indicator (we didn't get close to running down the battery in our tests).

The iXpand is on the pricey side compared to standard USB drives: even the 16GB model is £41.95 going up to £89.95 for 64GB and £129.99 for 128GB. It's great if you want to quickly copy photos off your iOS device, play videos that you couldn't easily play on an iPad, protect files with basic encryption and get emergency access to files when you can't get your iOS device online. However, if you can get online, cloud sync is a much easier way of working with documents, so save this for media that's too big to transfer wirelessly.

Join Discussion for: SanDisk iXpand Flash Drive for iPhone and...