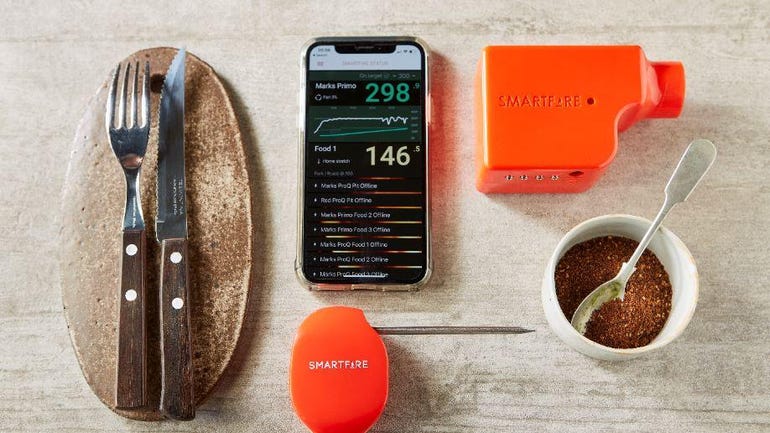 Trying to smoke meat to perfection on a barbecue is often a sleep-depriving labor of love fraught with pitfalls that threaten to ruin a great piece of meat.

The long, slow cooks and app alarms keep me awake and fraught with anxiety during a smoke.

Now a handy unit from Smartfire helps barbecuers avoid these worries, ensuring perfectly cooked brisket, pulled pork, and ribs no matter how far they may roam from the smoker or how long the cook may take.

The Smartfire barbecue unit monitors the internal temperature of the cooker and the temperature of up to three pieces of meat with its four-probe thermometers.

To keep the temperature constant in the barbecue, its variable-speed fan adjusts the airflow through the fire in tiny puffs of air to ensure a steady temperature throughout your cooks.

Originally produced in Australia, the unit comes nicely packaged in a nice ballistic nylon storage case. The four probes have nifty winders to stop them from tangling in the case.

The adaptor, which connects to the fan unit, fits into the normal air hole in your barbecue. You can either cut a hole in the side of the barbecue, or you can use the adaptor in one of the vent holes.

Once fitted, the adapter permanently sits in the barbecue and can be closed off when you do not want to use it.

The unit needs a power supply to power the electric fan. Alternatively, there is a USB port so that you could power it from a USB charger, such as the Jackery power station.

There are four probes supplied for the sockets -- one senses the temperature in the pit and controls the burn, and there are three other probes for the pieces of meat you want to cook or for other areas of the pit.

Managed via its companion app, connected via Wi-Fi to the unit, you can monitor and adjust the temperature in real-time without having to rush outside and fiddle with the barbecue or its lid.

The fan speeds up or slows down, so it maintains a steady temperature when you want to do low and slow cooking. You can watch the progress via the app or adjust the fan speed blowing through the fire remotely.

The Smartfire app for iOS or Android allows you to be away from the barbecue while you are waiting for the cooking to reach perfection; you can even log in via the browser app from wherever you are to see how your cook is going.

The app is simple to use: Log into the app log either via Facebook, Google, or email. Smartfire recommends using social login, as it plans to add social sharing of cooks in the future. Then, pair the app to the fan unit, and connect the app to Wi-Fi.

It took quite some time for the app to initially pair with my Android. First, it could not see the Wi-Fi, then I waited quite a while as the app tried to pair with the unit.

Fortunately, the quick start guide in the box took me through all of the potential issues that could occur, and eventually, my app connected, and it has had no problems since. The app manual has some insights if you do experience initial connectivity issues.

The Smartfire app prompted me through the setup process, but there are also guides (under the three-slash menu tab in the top left of the app screen) that provide step-by-step instructions on how to set up for different smoker styles.

I gave the Smartfire unit a nickname, chose the alarm sound, and selected a custom background for the app.

I then configured the app to connect to my Weber Smoky Mountain barbecue.

I set the high- and low-temperature alarms, and the fan started to try and get the temperature in the Smoky Mountain up to my chosen temperature.

You can override the app's automatic setup prompts by tapping the back button if you like to get to the adaptor install screens before you initialize the unit and get cooking.

Far too early in the morning, I lit the barbecue, and I waited to till it got up to a reasonable temperature. I then put my unwrapped beef brisket into the Smoky Mountain, closed the lid, and watched the temperature rise to 230F to 240F.

The Smartfire even suggested what type of wood to use to smoke the meat. I looked through the FAQs page, read the user guide, and browsed through the app for recipe inspiration.

Ten hours later, I took the meat out and wrapped it in foil until it was ready to eat.

Cooking the brisket in this way was far easier with the Smartfire than my other efforts.

In previous cooks, the brisket stalls at one temperature, meaning I had to regularly go outside, lift the lid, fiddle with the coals, losing heat, and starting again.

The Smartfire eliminates all of this faffing around.

If you have any problems, there is a very active Facebook group called Smartfire, which is very helpful for new users. You can also join the Smartfire Owners community on Facebook for more inspiration.

The quick-start guide is also accessible from the app, along with some suggested recipes. I can even see my past cook recorded in the app diary.

The meat was fabulous, and I made far less effort in getting this hunk of meat right than ever before. I'm hooked on this smart barbecue, and now know what I'm going to cook on Dec. 25 and which gadget I will use to make my life easier.

For under $250, the Smartfire is a useful little gadget that takes all the hard work out of a long slow cook and stops you from ruining the meat. It is also a great gift option for the BBQ lover in your life this holiday season.