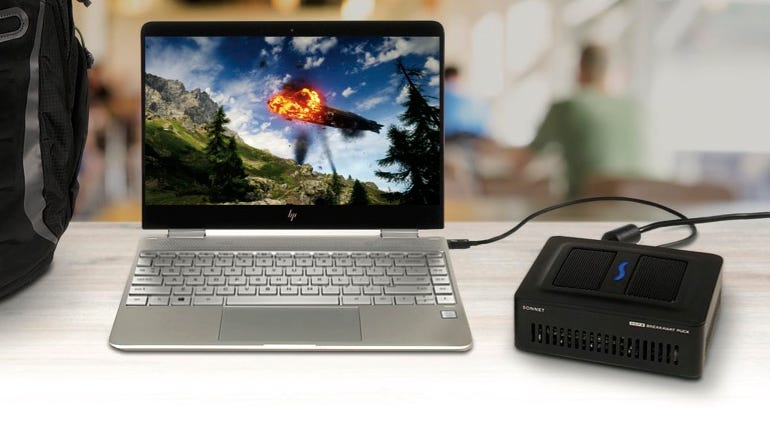 We've seen a number of external GPU enclosures (eGPUs) released in recent months, and many of the latest models are designed to appeal to professional users as well as the hardcore gaming audience. Business laptops often sacrifice performance for portability, but an eGPU can turn a lightweight laptop into a heavyweight graphics workstation when it gets back to the office. However, most eGPUs are housed in bulky enclosures that are often as large as a desktop PC. Sonnet's eGFX Breakaway Puck, however, claims to be the first portable eGPU that can be carried with a laptop when you're travelling.

Conventional eGPUs are sold as empty enclosures that allow you to provide your own graphics card, but the compact design of the Puck limits the size and power requirements of the GPU that can be used. Sonnet therefore sells the Puck with a preinstalled, integrated GPU. There are two options currently available, using either an AMD Radeon RX 560 or RX 570, both of which are equipped with 4GB of GDDR5 video memory. The RX 560 model can be bought direct from Sonnet in the US for $450, although UK pricing is considerably higher, at £582 (inc. VAT,or £485 ex. VAT). The RX 570 model costs $600, with UK pricing again higher, at £780 (inc. VAT, or £650 ex. VAT).

Sonnet has certainly done a good job of compressing the Puck into a highly compact and lightweight enclosure. The rectangular enclosure measures just 15.2cm wide by 13cm deep by 5.1cm high (6 inches x 5.1 inches x 2 inches), and weighs 700g (1.54lbs). There's an internal cooling fan, which sits right below the perforated top panel of the enclosure, and three cooling vents located on the front and both side panels. The back panel houses the power socket, and the Thunderbolt 3 port that's used to connect the Puck to the host computer. There are also three DisplayPort connectors and one HDMI port, allowing the Puck to drive a multi-monitor desktop setup in an office.

There's a sting in the tail though, as the Puck uses a bulky external power supply that's actually heavier than the Puck itself, weighing 1kg. Even with a lightweight ultrabook, the total weight when travelling with the Puck is likely to be 3kg or more, which means that the Puck isn't quite as portable as Sonnet implies. Still, most business users will probably just keep the Puck in one office location, so that it can still serve its purpose of providing a graphics upgrade, while also being portable enough to occasionally carry to other locations.

The other caveat is compatibility. The Puck requires a host PC that's equipped with Thunderbolt 3 and running 64-bit Windows 10, but it's still worth checking the compatibility notes on Sonnet's website before before buying. Apple's support for external graphics cards is still in its beta phase, but Sonnet has confirmed compatibility with a number of desktop Mac models and MacBook Pro laptops (including several older Thunderbolt 2 models).

The hefty power supply means that the Puck is perhaps best described as 'semi-portable', and the disparity between US and UK pricing will be disappointing for prospective buyers outside the US. Even so, an eGPU such as Sonnet's Puck does provide a 'best of both worlds' solution, allowing you to use a lightweight laptop when travelling, and then providing desktop levels of graphics performance back in the office. It's also worth considering as a cost-effective upgrade for some desktop PCs and Macs that don't provide expansion slots or other upgrade options.