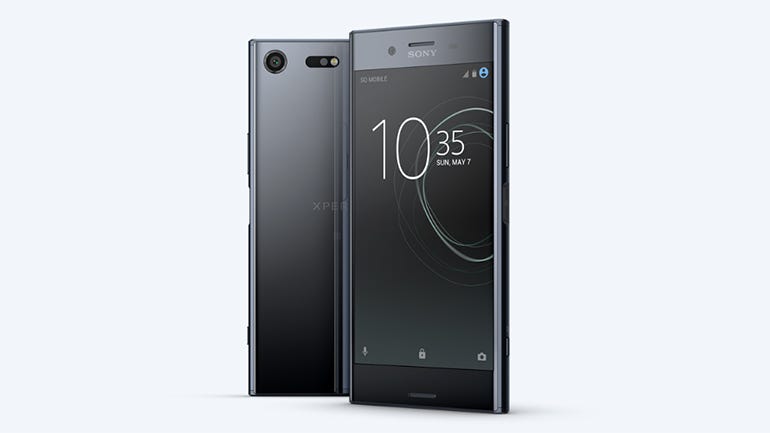 The Xperia XZ Premium is Sony's flagship handset for 2017, and it has a suitably premium price of £649 (inc. VAT). This is matched by the HTC U11 and LG G6 launch prices, and is a shade less expensive than the £689 Samsung Galaxy S8.

Sony has thrown everything at this handset, including a 4K screen and an ultra-slow-motion video capability that captures 960 frames per second (fps). Are these features overkill in the hunt for a unique selling point, or do they make the Xperia XZ Premium really special?

The Xperia XZ Premium displays Sony's characteristic blocky design. There's no attempt to emulate the curves of the competition, and the handset looks and feels old fashioned. It almost seems as if Sony's design team is stuck in a rut.

The colour of my review handset was 'luminous chrome', and it's not the colour I would have chosen -- I prefer 'deepsea black', or even 'bronze pink'. The colour just doesn't look like what I'd expect to see on a premium handset.

Gorilla Glass 5 protects the screen, and the front and back are Sony's signature material -- glass. I really don't like the mirror-like, reflective, fingerprint-grabbing back of the phone, either in appearance or in its somewhat slippery nature.

The top and bottom edges of the phone are made of metal, but the sides are plastic and while the handset is tough -- it's IP65/68 rated for water and dust resistance -- it just doesn't look premium grade. The IP rating signifies that the Xperia XZ Premium is 'dust tight' (IP6x) and protected against both 'low pressure water spray' (IPx5) and 'the effects of continued immersion in water at depths greater than 1m' (IPx8).

There's a rather odd arrangement for accommodating the SIM and MicroSD card. Removing the caddy on the left edge of the chassis reveals the MicroSD card tray, while the SIM sits in a tiny second caddy that has to be pulled out with a fingernail -- if you're a nail-biter, you'll need help with this. The plastic used to build the caddy doesn't feel too robust either.

I had issues with holding the phone comfortably and using the screen one-handed. Admittedly I've got small hands, but the Xperia XZ Premium's 77mm by 156mm by 7.9mm dimensions just don't nestle well. Moreover, any pocket that can take it will be weighed down to the tune of 191g.

On the upside, Sony has put its fingerprint scanner into the power button, which is inset into the right edge. This is far better ergonomically than having it below the screen, and meant I could easily unlock the phone one-handed.

A significant upside of such a large handset is that it can accommodate a big screen. Or so you'd think. But Sony can't seem to get away from sizeable upper and lower bezels, and even the side bezels are a couple of millimetres wide, so there's no 'edge to edge' feel here. For the record, the Xperia XZ Premium's screen-to-body ratio is 63.4 percent, compared to 84.1 percent for Samsung's Galaxy S8 with its near-bezel-free Infinity Display.

Here's a comparison of those other flagship handsets on size, weight and screen specifications:

The difference this makes to the viewing experience will depend on how the handset is used. To conserve battery life the phone runs in 1080p mode (1,920 x 1,080 pixels) most of the time, flicking into 4K mode when it needs to show high-resolution content. Many eyes will struggle to see any difference at 4K mode, and in any case, even the much-vaunted VR potential of 4K isn't available in the wild yet. As for HDR video -- that's a rare beast indeed at the moment.

There is definitely some futureproofing going here, but I'm doubtful whether 4K resolution or HDR support are essential features right now.

There's a decent 13-megapixel front-facing camera, but the Xperia XZ Premium's photographic claim to fame rests with its main 19-megapixel Motion Eye camera, which can shoot slow-motion video at a class-leading 960fps.

This is a massive advance on the 240fps slowmo modes of rival handsets such as the Samsung Galaxy S8 and iPhone 7. It's made possible by having some RAM dedicated to the camera so that video can be buffered.

There are three different slowmo options. Capturing at 120fps in 'slow motion' mode allows you to apply slowmo effects in post-capture editing. There's also a 'super slow (one-shot)' mode that captures a short clip of just a few seconds at 960fps within a longer video. Finally, there's a 'super slow motion' that runs at 960fps during normal video capture. In the latter case you need to choose the moment by pressing an on-screen button. One video can have numerous slowmo sections, but it isn't possible to stop slowmo capture at will. Once started, it continues for a set period, producing something like three seconds of super-slow action within a full-speed video.

It was fun playing with this feature, but the slow periods are too short to really add value to any particular video. There's also an issue with low light conditions, which produce poorer quality video. But that's the same for 19-megapixel still images too, which are at their best outdoors in bright sunlight.

The camera's memory buffer, incidentally, also supports a feature called Predictive Capture. This kicks in where the camera thinks there's a lot of movement, taking a burst of several images so you can select the best one later.

The camera button on the right edge of the phone will be familiar to Xperia fans, and it both takes a shot and launches into the camera app from wherever you happen to be. This is great for taking quick snaps. The button's action is a bit spongy, but it's good that the half-depress to focus has its own click point.

As a flagship handset it will not be a surprise that the Xperia XZ Premium runs on the latest Qualcomm Snapdragon 835 SoC, with an Adreno 540 GPU. There is 4GB of RAM and 64GB of internal storage, with MicroSD card support available if you need more.

There's nothing wrong with performance, which is as nippy as you'd expect from a top-flight handset. Sound quality is pretty good too, with a pair of front-facing speakers in the right position not to be muffled by a desk or other surface. Still, I would have liked more volume.

The 3,230mAh battery easily saw me through a day's use. The provided AC adapter and cable will provide fast charging thanks to Quick Charge 3 support. Oddly, this was not supplied with my review sample, so I had to rely on a standard USB-C charge cable.

The OS is Android 7.1, to which Sony ads myriad extras ranging from Sony's own PlayStation app and Xperia Lounge to the Kobo e-reader app, Lifelog fitness app, and Amazon Shopping. If you like a vanilla Android experience, this might not be the phone for you.

Sony has packed the Xperia XZ Premium with features, and its general performance is exemplary. However, the two headliners -- the 4K screen resolution and 960fps super-slow-motion video -- promise more than they actually deliver.

The design, too, is somewhat lacklustre, and a flagship handset should not have plastic edges or a flimsy SIM caddy. Also, I'm personally no fan of the level of software bloat over the standard Android apps, but others may differ on this.

Xperia devotees may well be drawn to the XZ Premium, but with pricing on a par with other flagship handsets it will be worth careful research before taking the plunge, including looking further afield to the likes of the new, more affordable, OnePlus 5.