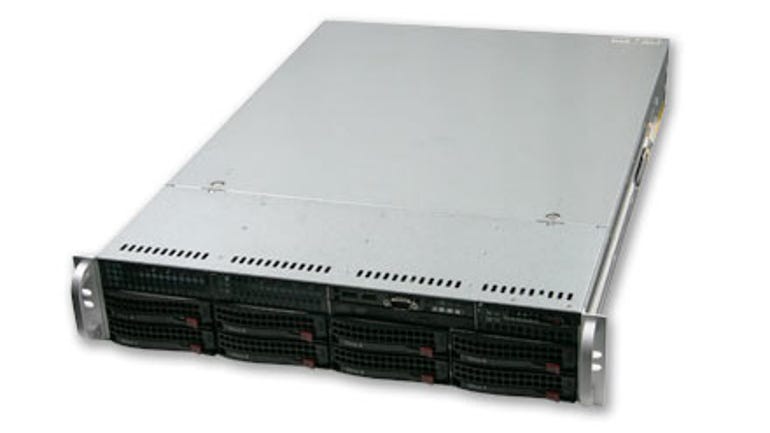 This means existing tape software can interact with it, and as far as it's concerned, it's looking at a tape library. This allows corporations with existing tape infrastructure to either use the VTL as a way to transition from tapes to hard drives for increased density, consolidation and performance, or make it a middle step for backups, so you get disk speed initial backups which are then eventually dumped to tape.

It's not a new concept, and Tandberg is just one player in a field that includes FalconStor, EMC, IBM and Sun. The DPS1200 allows for 64 virtual tape drives to be connected simultaneously, while the lower level DPS1100 can handle up to 32.

Running on a modified Fedora Core 6, the Tandberg Data DPS1200 VTL is a 2RU chassis bristling with storage controllers — the LSI 20320IE for SCSI; the LSI SAS3801E for external SAS; and an Areca ARC 1222 to control the eight 3.5-inch, 750GB Seagate Barracuda ES.2 disks in the hot swappable bays at the front. There's even six SATA ports on the motherboard waiting to be used if you need it, as well as an internal USB port.

A slimline DVD+-RW drive is mounted at the front as well, and above this is a serial port and two USB ports. The clip-on, lockable bezel (MCP-210-82503-0B) is supplied to cover these and the drives, just in case you don't trust those in your datacentre.

Flip the chassis around, and you're presented with dual-Ablecom (SuperMicro's PSU brand) PWS-702A-1R 700W power supplies, PS/2 ports for keyboard and mouse, dual USB ports, serial, VGA and dual gigabit RJ45s powered by Intel's 82575EB, simply marked iSCSI 0 and iSCSI 1 (Tandberg claims the DPS1000 series is capable of handling up to 100 individual iSCSI client initiators). An extra Intel Pro/1000 PT is re-purposed as a management port which gives access to the web interface only.

Take off the top, and immediately you spot a problem — three San Ace 9G0812P1G09 80mm fans, but with no form of redundancy whatsoever. If one of these fail, you lose airflow. Two of the fans have their airflow directed by a baffle over the CPUs, half the motherboard chipset and the RAM, although curiously one RAM chip sits outside the baffle, which is, to say the least, baffling.

The baffle won't fit over unless you exclude one RAM stick, which is a bit odd.
(Credit: CBS Interactive)

Upon boot-up, you're eventually presented with a prompt offering very few commands: ? and help, generate_ts, hostname, initiators, netconfig, ping, reboot and shutdown. All are fairly self explanatory except for generate_ts, which creates a "troubleshooting package" — a zip file of selected logs and config files — this package is impossible to retrieve if the command is run from the command line, leaving the user to execute it through the web interface instead, which automatically downloads the generated file.

Why couldn't we do it by command line? The usual Linux commands have been stripped from the distro, with no access to ls, cp, mv, df, man or whatever else you're used to. Don't expect to be touring the OS's file structure any time soon — this is an appliance, and as such there's nothing offered beyond its intended functionality. While hooking up over console gives you more verbosity during boot-up, you still get the same limited prompt once it has finished loading.

The web interface, however, supplies more detail, and is the primary configuration tool for the DPS1200. Interestingly, there are two administrator accounts: one for an appliance admin, the other for a storage admin. You can set up an account that is both an appliance and a storage admin after the fact, but from default both can edit system settings, view the storage dashboard and exports report, configure notifications, and edit system settings (enabling physical tape library support, SMTP configuration and iSNS configuration).

The appliance admin's unique power seems to be altering network settings, while the storage admin is a little more elevated and gets to manage VTLs, tape exports (including scheduling), security certificates, users, and is allowed to backup or restore the machine's configuration and update its firmware.

The bulk of the management will need to be done through the web interface.
(Credit: CBS Interactive)

After setting up the server as an iSCSI target, we found a reboot was required for the settings to take hold. After it had finished re-loading, we were then required to download Microsoft's iSCSI initiator on the client side, and download and install the Initiator Setup Files, found by clicking on the question mark icon in the web interface of the DPS 1200.

Running the set-up files on the client installs the emulated HP Ultrium LTO-3 and Tandberg Data T40 drivers, which in theory allow connection to the DPS1200 — however, we were forced to manually update our drivers afterwards through Device Manager to get the device to register. Once this was done the virtual tapes started appearing in our Storage/Removable Storage/Media channel under Computer Management, and the VTL was visible in Windows Backup Utility.

The DPS1200 doesn't currently support data de-dupe, although Tandberg is looking into building an optional plug-in. In the meantime to reclaim lost space it has a proprietary compression routine called "Dynamic Data Reduction", where it claims it can compress file sizes by up to 10 times — a software version of what is already in hardware on LTO drives.

Tandberg's VTL is a baby compared to some of its competitors, although there is the option to expand the DPS1200 through external units via the external SAS ports, allowing you to daisy-chain 2RU, 4.5TB servers up to 45TB raw capacity. We were sadly unable to test online expansion by swapping out the 750GB drives for higher capacity disks, but Tandberg advises against it, citing it as a complicated process that may impact the warranty — it would much prefer to sell you another rack unit for around AU$14,000.

The DPS1200 itself starts at AU$25,000 with a single processor. You can cobble together the DPS1200 exactly from commodity hardware for less than AU$7000 (not including shipping) if you're willing to import the LSI cards, motherboard and chassis from the US — which means Tandberg is putting a price on its software of about AU$18,000. There are ways to set up similar systems yourself, but they require some fiddling, aren't as plug-and-play as Tandberg's solution and, of course, you miss out on the three-year warranty and support.

While the lack of supported online expansion and de-dupe is a concern, if you're in a small to medium business, trying to banish tape, or just need an intermediary to make backups quicker or more frequent before they're consigned to tape, then Tandberg's DPS1200 VTL may deliver what you need to reduce your backup burden.