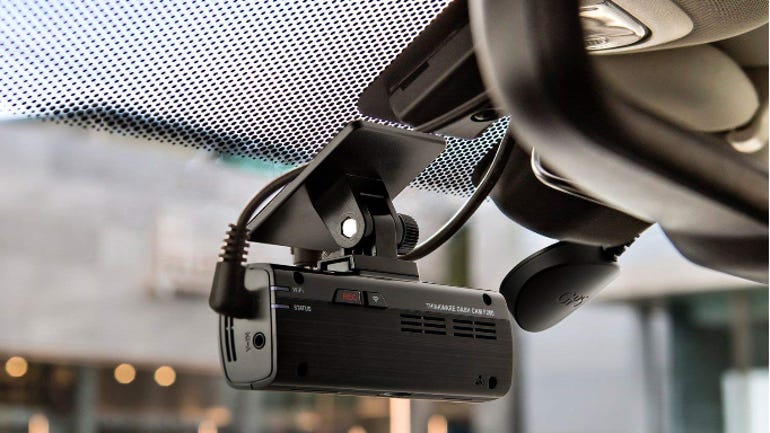 The F200 dash cam from Thinkware is positioned in the middle of the product range between the F70 and the F800 Pro. Like the other Thinkware models, the F200 has full HD recording at 1080p, 30fps video capture, and a 140-degree field of view.

Unlike the F70, the F200 does not have the ability to alert you when the vehicle in front starts to move off from stationary, but with the addition of a GPS antenna, the F200 does have the option of adding safety camera alerts to its feature list.

Also: Tech and the future of transportation: From here to there

The video playback shows reflections from the front screen support pillars, which I found irritating, but in order to get the full 140-degree field of view, the roof pillars will be visible.

This model has a rear 720p 30fps weather proof camera as standard, and it has with wide Dynamic Range technology to give greater definition between light and dark areas. Definition in low light is good and objects are easily discernible.

Like other models in this range, the F200 has no settings screen, making this model unobtrusive on the front screen. It is 3.75 x 1.25 x 0.9 inches with a lens at the front and two buttons for recording and Wi-Fi at the rear.

To set the options for the camera, connect to it using Wi-Fi, download the app, or insert the microSD card (maximum size 128GB) into your PC and configure settings there.

The 16GB microSD card, which is included with the camera, also has the firmware for the camera and the software dashboard viewing app.

The optional GPS antenna and firmware update added speed camera alerts to the camera -- a very useful feature across Europe. Usefully, the PC dashboard view also shows the mapping feature, so you can determine exactly where you were driving.

When I connected the GPS antenna and used the car for a while, I was puzzled why I had no alerts, even when driving past speed cameras.

I contacted Thinkware, which pointed me to the link to download the 144mb firmware update to add the speed cam maps and the speed camera alert. This really useful feature is not mentioned in the GPS antenna manual and should be easier to install.

Like the F70 and F800 Pro, the F200 has collision detection features, which captures 10 seconds before and after any impact or pothole in the road.

The camera also has energy saving parking recording mode so that you can leave the car for extended periods of time without draining the battery.

The only downside with this is that opening the car door, getting in the car, and shutting the door records an impact incidence, which is announced when the car is started.

Apart from these issues I was happy with the way that the F200 performed, and I liked the fact that it sat behind the rear view mirror, so that it did not obstruct my field of view.

I would definitely get the optional GPS antenna, as the extra mapping and camera features absolutely justifies the extra cost.