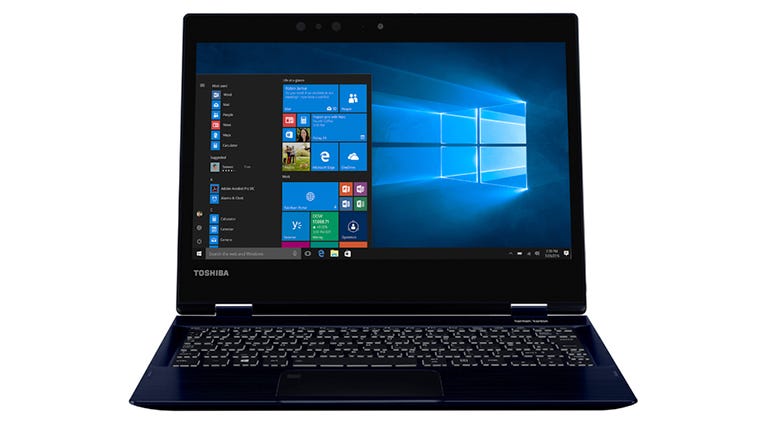 It has been just under a year since I reviewed the Toshiba Portégé Z20t, a 2-in-1 hybrid ultrabook that ticked a lot of boxes for me -- although there were also some niggling annoyances. In the frame now is Toshiba's new 2017 flagship ultrabook, the Portégé X20W-D. The removable screen of the Z20t has been replaced with a 360-degree rotating configuration, and Toshiba says this laptop is the thinnest and lightest business 2-in-1 hybrid to use full-power 7th-generation Intel Core processors.

Rather than get bogged down in detailed comparisons, the main point is that Toshiba has come up with an ultrabook that's small, light and extremely portable. It has the same footprint as an A4 pad and will sit neatly in a bag or backpack.

The brushed-effect finish on the lid, replicated inside the shell, is elegant and remarkably resistant to picking up fingerprints. Toshiba says the laptop's livery is 'Onyx Blue', although it looks black to me.

You may well want to carry the Portégé X20W-D in a sleeve, though. Despite the tough magnesium chassis there's a fair bit of flex in the lid, and wrist rest is also somewhat flexible.

By contrast, the 360-degree hinge mechanism feels very robust, holding the screen securely at whatever angle I chose during testing.

The backlit keyboard is necessarily somewhat squeezed into the chassis. Its keys are small but well spaced, which helps prevent mishits. There's relatively little travel on the keys, which are extremely light touch in general. The overall feel won't work for everyone, and those who prefer more feedback might not approve. Still, as a light-fingered touch typist I got on fine.

The SecurePad touchpad has a strangely sticky feel to its surface which I didn't take to. The embedded control buttons worked perfectly well, though. There's a fingerprint sensor in the top left of the touchpad, and further biometrics come courtesy of the IR camera above the screen for face login.

The touchpad can be disabled with a FN key combination, but it's irritating that there's no light to indicate the pad is out of action. Instead an alert sits bottom left of the screen until tapped, at which point it disappears, and it's up to the user to remember whether the touchpad is enabled or not.

The screen is touch responsive, and Toshiba provides its own AES Stylus Pen for direct handwritten input; when the screen is being used for pen-based input, palm rejection comes into play. As already noted the screen swivels through 360 degrees to lay flat and facing outermost, where it's ideally suited for use with the Sketchpad app that came with the Windows 10 Anniversary Update, along with other Windows Ink enhancements such as the ability to write into Sticky Notes.

The pen is too large to live in a housing on the Portégé X20W-D, so it will need to be carried separately. While not unusual, this is a bit of a pain. More concerning is that the screen exhibits a lot of downward flex when the pen is pressed into it. Like the keyboard this is probably better suited to light-touch users. I do wonder about its long-term robustness.

The keyboard gets disabled when the screen is in tablet mode, but it doesn't lock or retract. To be fair, very few laptops lock out the keyboard for tablet-mode working, but it's not clear whether the keys are entirely safe from excess pressure when the Portégé X20W-D is held in this mode. This is more of a concern here than with some other laptops because the very lightness of the Portégé X20W-D makes it much easier to hold in tablet mode for extended periods.

The 12.5 inch screen offers full-HD resolution (1,920 x 1,080 pixels), which at 176ppi puts it at the lower end of what's expected for a flagship business laptop these days. Still, it's clear enough to read, and I found it pleasant to work with. Top and bottom bezels measure about 18mm and 28mm respectively, while the side bezels are about 8mm. While the bezels help prevent accidental screen taps when working in tablet mode, they also beg the question of whether Toshiba could have included a larger screen. Remember, Dell's InfinityEdge design crams a 13.3-inch screen into the 360-degree-rotating XPS 13 in a chassis that's just 5mm wider.

There are currently two configurations of the Portégé X20W-D available. I was sent the more expensive model for review:

Both models feature Toshiba's new hybrid air cooling system. An inlet at the back draws in air to cool components and the chassis, while another inlet on the underside provides air for cooling the CPU. This seems to work well -- the laptop certainly always felt cool to the touch during testing.

Connectors are minimal -- just two USB ports and a 3.5mm audio jack. One of the USB ports is USB 3.0 port with sleep-and-charge, while the other is USB-C/Thunderbolt 3 with data, DisplayPort and battery charging support. The key problem here is that no USB-C peripherals can be attached while the Portégé X20W-D is being charged, unless a pass-through solution is employed. Of course, Toshiba sells docks with a wider range of connectors, as well as providing for pass-through charging. At least Toshiba bundles a USB-C to HDMI adapter that does offer charging pass-through.

The physical flexibility of this laptop potentially makes it suitable for presentations. The Harman Kardon sound system delivers clear tones, but lacks volume. It's probably OK for presenting to smaller groups, though.

Toshiba says the 3-cell Li-polymer battery will last for up to 14.5 hours (this is the spec sheet quote; the press release claims 16 hours). I can't say I experienced that, but all-day working is certainly on the cards. A typical three-hour work session involving writing, web browsing and some streaming, during which the screen was set to about two-thirds brightness, consumed just over 40 percent of the battery capacity.

Toshiba's Portégé X20W-D is a small, light ultraportable with a 360-degree rotating hinge. Build quality is not as robust as it could be, and some may find the keyboard a little too light-touch for comfort. The lack of ports and connectors -- and in particular the fact that the USB-C port is unavailable when the laptop is charging -- is also a drawback. Still, the Core i5/i7-based Portégé X20W-D is lightweight, includes a stylus, and should deliver all-day battery life -- if not the full 14.5 hours (or even 16h) that Toshiba claims.