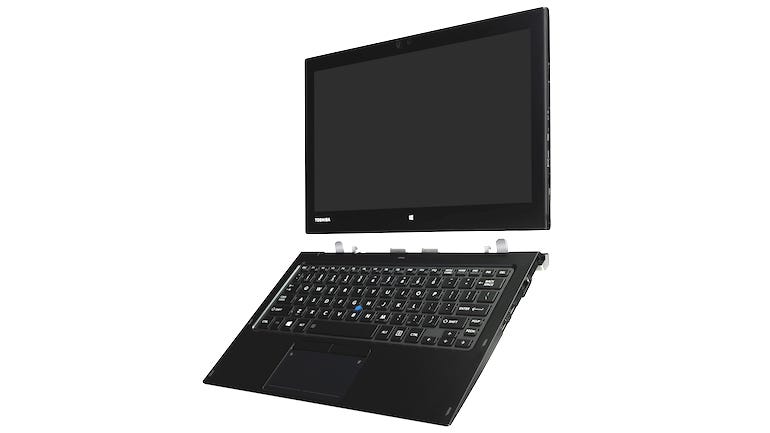 About this time last year we looked at Toshiba's premium 2-in-1 hybrid, the 12.5-inch Portégé Z20t-B. We found it to be a competent -- if somewhat expensive -- device, and that you needed to select carefully from the various models on offer to satisfy different requirements.

The Portégé Z20t-C is a compact and businesslike 12.5-inch laptop/tablet hybrid, and since Toshiba tends not to change the physical design of its business laptops as it updates the innards in successive years, the 2016 Z20t-C looks very similar to 2015's Z20t-B.

The general look and feel is utilitarian, but none the worse for that. The top and base are primarily black, with a stripe of silver connecting the two parts. When you detach the tablet, that silver section, which houses the locking system, remains on the keyboard section.

Build quality is acceptable, but not outstanding. The base is pretty solid, but there's some flex in the screen/tablet section. Thankfully we didn't experience the screen popping out of its housing, as happened with last year's model.

The tablet release mechanism is a little complex. There's a sliding catch just beneath the screen, which you need to push into the 'release' position. It won't go there unless you first slide a lock switch that's on the left edge of the chassis into the 'unlock' position. This double-locking configuration gives an extra layer of confidence in the mechanism, although the side button doesn't automatically 'lock' when you dock the tablet, so you'll need to remember to do it manually.

The lock mechanism itself comprises two sliding 'hook' latches and two metal pins. It's solid enough that I felt able to lift the docked device by the tablet without fear of the two sections falling apart (not an advisable practice generally).

The hinge doesn't allow for full 360-degree rotation, but you can easily remove and redock the tablet with the screen facing outwards in what Toshiba likes to call 'presentation mode', or lay it flat on the keyboard facing outwards in 'tablet mode'.

The Z20t-C's 12.5-inch screen has a noticeable bezel, which is needed because it also has to function as a standalone tablet and you don't want fingers encroaching on the screen when you're holding the device. This does mean that screen size is somewhat compromised in laptop mode: Dell managed to shoehorn a 13.3-inch screen into its Latitude 13 7370, a non-convertible ultrabook that measures 30.5cm by 21.1cm by 1.43cm, while the Portégé Z20t-C comes in at 30.9cm by 21.5cm by 2.1cm with a considerably smaller screen.

Our review model had a full-HD resolution of 1,920 by 1,080 pixels (176ppi), which is a little disappointing. Since you're paying just under £2,000 excluding sales tax (VAT) you might expect a higher resolution, but full-HD is fixed across the range, as is the matte finish and use of toughened glass.

All Z20t-C displays are touch responsive, but you only get a digitizer pen with some models. There's no on-device housing for this, so be careful you don't lose it. The tablet does have a slot containing a thin, stubby stylus that Toshiba calls a 'Reserve Pen'.

The keyboard is backlit and spill resistant. There's only one brightness level for the backlight, but you can configure this in a system settings utility. From a usability perspective it would be preferable to toggle between brightness levels using a key combination, as it's unlikely many users will want to delve into the system settings utility to make this kind of adjustment on an ad hoc basis.

The keyboard has a light feel under the fingers, and Toshiba has incorporated its AccuPoint pointing stick for use with a pair of physical buttons that sit above the touchpad. Integrated buttons at the bottom of the touchpad are denoted by slightly raised horizontal lines. Everything feels ergonomic under the fingers, and we were able to touch-type at full speed with no problem.

The relative weighting of the tablet and keyboard sections is always an important factor for hybrid devices, which can be prone to toppling backwards when you use the touchscreen in laptop mode.

In our review model the tablet weighs 0.73kg and the keyboard 0.78kg, making a combined weight of 1.51kg. Prodding the screen anywhere above halfway when working in laptop mode causes the keyboard section to raise unless you make a conscious effort to use a light touch. This isn't unusual for hybrid systems, of course.

The ten iterations of the Portégé Z20t-C mean there's an array of specifications on offer, at a variety of price points. The entry-level £1,399 (ex VAT) Z20t-C-11Q model has core specifications of a 1.1-2.7GHz Intel Core m5-6Y54 processor, 8MB of RAM and a 128GB SSD. There's no mobile broadband with this model.

In our testing, a morning's work drained the keyboard's battery to just below 60 percent, leaving the table's battery fully charged. This was based on a light usage pattern consisting mostly of document creation/editing and web browsing. If your working day involves more demanding workloads, you may get one day's life from the dual-battery system rather than two.

If you need a hybrid laptop that can handle presentations to small groups, you might be heartened by the Portégé Z20t-C's battery life. Unfortunately the sound quality from the speakers is disappointing: volume goes high enough, but there's a lack of bass and at the highest volume the treble tones grate somewhat.

As part of the 2016 upgrade, Toshiba has changed the configuration of ports and connectors. Happily the legacy VGA port remains, on the left side of the keyboard section alongside a full-size HDMI port. The right side houses an RJ-45 Ethernet port, a pair of USB 3.0 ports and the power connector.

The power button is on the right side of the tablet (in landscape mode), along with a SIM card slot (if mobile broadband is supported), a volume rocker, a USB Type-C port, a Micro-HDMI port, a Micro-SD card slot and a 3.5mm headset jack.

There are two HD cameras, one above the screen and another on the back of the tablet.

Toshiba has got a lot right with the Portégé Z20t-C. The build is reasonably solid, and the hinge mechanism reliable. Twin batteries are a great idea, and the availability of a 512GB SSD option is welcome, as is support for legacy VGA monitors and projectors.

There are niggles like the disappointing speakers, a one-size-fits-all screen resolution, and the oddly convoluted way of controlling the keyboard backlight. You'll also need to look elsewhere if you're working with a tight budget.