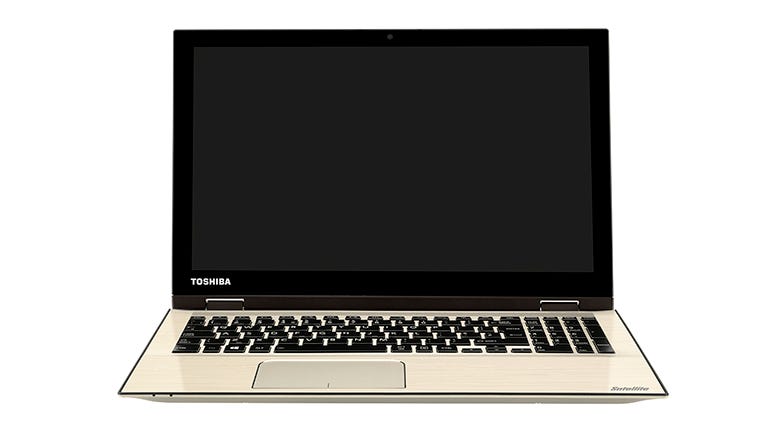 One day, perhaps screens that rotate through a full 360 degrees will become the norm for laptops. Toshiba's Satellite Radius 15 shows this feature off in a laptop with a 15.6-inch form factor - but does the larger-than-usual screen size make for good user ergonomics?

Toshiba has not done anything fancy with the screen design, relying on a pair of straightforward-looking hinges that are strong enough to keep the screen wherever you position it.

That's important as Toshiba is pushing five orientations to which it has given names suggesting possible uses. 'Laptop mode' is obvious. Lay the screen flat to the desk and you are in what Toshiba calls 'Tabletop mode', which is says is good for displaying content to a group. As all the other modes are arguably better for this (unless people are happy crowding round and clashing heads to look down onto the screen), tabletop mode feels a bit like a solution looking for a problem.

Push the screen round further, propping the laptop up on a desk in what some vendors call 'tent' style and you're in 'Presentation mode' (for "displaying the latest report", see what we mean?). You put the keyboard on the desk and angle the screen to get 'Audience mode' (yes, that's group-viewing friendly too). And finally, lay the screen down flat on the base of the laptop and you're in 'Tablet mode'.

There's nothing revolutionary (excuse the pun) about these orientations any more, but there are practical considerations with some of them when working with a laptop of this size and weight.

There's a 1.5cm bezel around the top and sides of the 15.6-inch screen, and an even larger 2cm bezel at the bottom of the screen, resulting in a sizeable desktop footprint measuring 37.9cm wide by 24.5cm deep.

With smaller convertibles a wide bezel makes real sense: when you're working with the screen fully rotated to face outermost you might be tempted to hold a laptop in one or two hands, tablet-style, and the bezel prevents accidental taps of the touchscreen. You won't want to hold the Radius 15 like this for too long, though -- unless you're comfortable carrying 2.24kg of weight.

If you are, be very careful of the keyboard. Its keys don't physically lock out, making it easy to press them indiscriminately. When you do this nothing happens on-screen, but we wonder how easy it would be to damage the keys. To be fair, this is a general problem with most convertible laptops: keyboard locking should really be a standard feature on convertibles.

We were also unsure about Presentation mode, finding the Radius 15 lacking a bit of stability. On the other hand, its large screen makes it great for group presentations in any mode (even headclashing Tabletop mode), while in tablet mode having 15.6 inches of screen to play with is useful. Sad, then, that the stereo speakers are a bit of a let-down in this respect: audio output lacks bass, although there's plenty of volume.

There is a far more significant usability issue, however. Our review sample came with a 1,920-by-1,080-pixel (141ppi) screen, and that's the highest resolution you can buy in the UK, although US customers can get a 4K UltraHD (3,840 x 2,160,282ppi) display. The main problem, though, is that the screen is extremely reflective and there's no escaping the distraction of its mirror-like qualities. We were unimpressed with the constant reflection of our own face when working in laptop mode, and although the TruBrite IPS panel's viewing angles are inherently fine, all we could often see in practice was whatever the screen was reflecting. This would be a deal-breaker for us.

Also, every prod of the touchscreen caused the display to wave around, and we didn't have to prod very hard to make the keyboard section company with the desk. This could be quite annoying in everyday use.

The Radius 15's footprint can accommodate a full-size keyboard and a slightly squished number pad. The whole thing is backlit with manual Fn key control over two brightness levels. The keys feel superbly light and springy under the fingers and we had no trouble with full-speed touch typing. The large touchpad is efficient and responsive too.

Overall build quality is impressive, with a very solid aluminium base and lid whose silver is set off by rubberised black piping around the edges that provides some buffering against gentle knocks. The chassis tapers towards the front from its 2cm maximum thickness. Despite a very slight lid overhang at the front of the chassis this is not the easiest of laptops to open up. We found that jamming a fingernail between the lid and base sections was the most effective method.

Our review sample came with Windows 10 Home, although online Toshiba says Windows 8.1 is on board with a free upgrade. Windows 10 is a boon to a convertible laptop as it means automatic switching between desktop and tile-based UI whenever you change hardware orientation. You can opt to be asked which UI version you prefer every time you change the laptop orientation.

The 5th-generation Intel Core i5-5200U processor is supported by 8GB of RAM (expandable to 16GB). This dual-core 2.2-2.7GHz processor, which incorporates an HD Graphics 5500 GPU, is not leading edge, but it is a Q1 2015 launch and should prove perfectly adequate for everyday workloads. The 1TB hybrid hard drive with 8GB of SSD cache reported 918GB of available storage. This should be enough for most people though at its website Toshiba says there is a 2TB HDD option as well as a 256GB SSD. Booting is fast, presumably because the OS is stored on the SSD.

There are fewer ports and connectors than you might expect, given the size of the Radius 15's chassis -- wired Ethernet is missing, for example. There is a single USB 2.0 port and two USB 3.0 ports, one of which supports USB sleep and charge, plus and HDMI connector that supports 4K UltraHD. There's also an SD card slot and headset jack. Wireless connections are 802.11ac wi-fi and Bluetooth 4.0+LE - there's no integrated mobile broadband option. Above the screen a 720p webcam is good enough to facilitate video conferences.

The Radius 15's 3-cell Li-ion battery is quoted as good for up to 7 hours and 40 minutes of life. In anecdotal everyday use we found this a little optimistic: we didn't get through a full working day without recourse to mains power, and even idling on the desk for a morning drained the battery of 20 percent of its charge. Don't be caught without the AC adapter to hand...

Toshiba's Satellite Radius 15 is a solidly built convertible 15.6-inch laptop. Multiple screen orientations make it seem flexible, but the screen is far too reflective and proved a constant irritation for us. Along with the moderate battery life, this considerably reduces its appeal.

On the plus side, there's plenty of storage and an excellent keyboard, while the Core i5 processor and 8MB of RAM equips it to handle everyday workloads with no trouble. Overall this laptop, which costs £699.99 (inc. VAT; £583.32 ex. VAT; from $999.99), is probably better suited to the deskbound than the mobile worker.