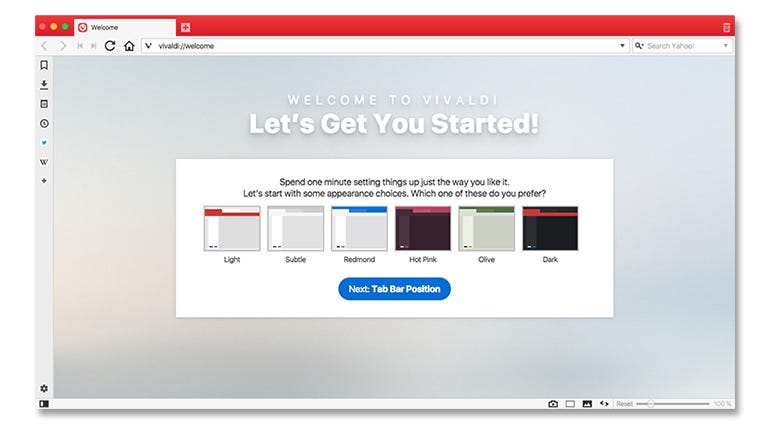 How many web browsers can you name? If Vivaldi isn't on the list, then maybe it's time to investigate it. This is a web browser with some interesting features that might just be enough to draw you away from your current favourite.

Vivaldi has an interesting provenance. Its founder and CEO Jon von Tetzchner once worked on Opera, a browser that built a big following a few years ago, but which has since fallen out of favour. He launched Vivaldi Technologies in 2013, and released the Vivaldi browser early in 2015. We are now at Vivaldi version 1.14. That might sound rather young for a web browser (version 1.0 launched in April 2016), but don't let its tender years put you off: Vivaldi has much to offer.

This is a refreshingly different take on browsing with plenty of features that I quickly took to and started using as second nature. Other browser users can access some of these features via extensions, but with Vivaldi, they are present right from the get-go.

For example, Vivaldi has a narrow panel down the left side giving access to a range of features that pop out into a side panel. You can pull out bookmarks and quickly access them, see what's been downloaded, view search history, view tabs and make notes. The latter is particularly useful for anyone who likes to jot down ideas while looking at a web page. Notes can incorporate full screenshots or grabs of a specific screen area, files can be attached, and -- new in the latest version -- there is markdown support.

You can add a URL to this panel. This might be useful for always-on monitoring of social media feeds, although of course it does mean the main web browsing window is narrower than usual. You can move the left-hand panel to the right side of the screen if you prefer -- this is one of a myriad settings you can tweak so that Vivaldi works the way you want.

Along the bottom of the Vivaldi window there's a screenshot button, a toggle for loading page images and playing animations that might come in handy if bandwidth is low, and a button that accesses a host of page controls including pushing a page into black-and-white, removing transitions and blocking third-party content (ads); there's even a CSS debugger for the devs among us.

There's no menu bar. Instead, a click on the Vivaldi logo to the left of the address bar calls up a vertical menu whose primary tier offers File, Edit, View, Tools, Window and Help. As you'd expect, further menus cascade horizontally out of each of these. It's a space-saver on vertical viewing space.

Tab management is an important browser feature these days, and Vivaldi has lots to offer in this respect. Tabs can be located wherever you want them -- not just in their normal top location, but at the bottom of the browser window, or to the left and right. Drag one tab onto another and it is 'stacked'. Click on the stack and all the tabs within it preview in thumbnails. A click on any thumbnail opens the page. Stacks can be opened in a tiled view, and saved as a stack -- this is really handy if you're researching a topic and want to block-save everything you've found so far.

Then there's themes. Vivaldi comes with a number of different themes built in, and you can make your own, selecting background, foreground, accent and highlight colours as well as making other settings. If you use Philips Hue you can even integrate your theme with the lighting system. Now there's personalisation!

There is a lot more to explore in Vivaldi, including some interesting accessibility features. Inveterate mouse users can set up mouse gestures to perform particular tasks, such as opening a new tab, reloading a page and moving through browsing history. Meanwhile, with a simple click of a tab in the address bar you can switch into Reader Mode. Here the text from a page, along with in-article images and links are retained, but everything else goes, making reading text fast and easy. A pop-out menu lets you change the text size, adjust fonts, and even invert the screen to white text on a black background.

Meanwhile, those of us who want to see how we really spend our time online can use the pop-out graphs on the History view to see what we've been up to, including a list of most-visited websites.

The January release of version 1.14 added some new features to Vivaldi. The aforementioned markdown feature was added to note taking, along with the ability to rearrange the order of panels in that side view; there's also a new reader mode that reorients pages for vertical reading, which is likely to have appeal among East Asian users.

I quickly got used to some of these features, with the side menu and stacking tabs a particular favourite. But what I really like about Vivaldi is how fast and easy it is to navigate the features. This is particularly noticeable when working with a touch-screen: with so many options and choices ranged around the screen, and with so much of what you can do only one or two finger taps (or mouse clicks) away, this is a browser whose depths are easily plumbed at speed. If you haven't tried Vivaldi, you should definitely consider doing so.

New browser on the block Vivaldi taps Raspberry Pi growth
Vivaldi has unveiled a browser for Raspberry Pi and may soon have a build for smartphones, too.

Opera just added a Bitcoin-mining blocker to its browser
Finally, a browser is doing something to protect users from drive-by crypto-miners.

Google bullied us and must be regulated, says Vivaldi and Opera founder
Vivaldi CEO Jon von Tetzchner calls for Google to be regulated after experiencing a three-month AdWords suspension.

Interview - Vivaldi browser developer aims to cater for even more demanding users
Following the successful launch of the Vivaldi browser, CEO and co-founder Jon von Tetzchner has been touring Europe to meet the press and users to get feedback and explore plans for the future.