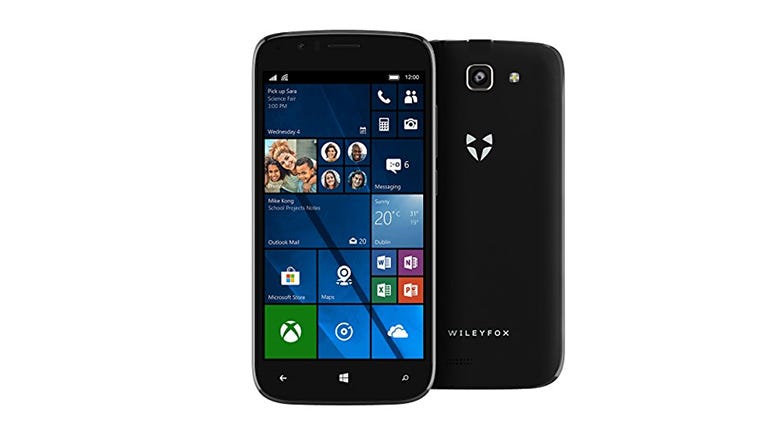 It's common to write Windows Phone off as a dead mobile OS, especially since Microsoft is effectively out of the handset business. But the operating system is still supported and getting updates. In fact, for its business customers, many of whom have signed support agreements, mainstream support for Windows 10 Mobile continues until December 2019 or October 2020. Of course, that's not much use if businesses can't buy any more handsets without trawling auction sites for stock, so Microsoft is working with OEMs to keep the supply going for business users who want to stay on the platform.

That's how Wileyfox came to launch its first Windows Phone handset. The Wileyfox Pro is a lightweight budget device with a five-inch screen that still comes nicely packaged with a full set of accessories -- a charger with US, UK, and EU plug fittings, a Micro-USB cable and a wired headset. The battery is also removable, which is unusual these days.

Micro-USB is also unusual for Wileyfox devices, whose recent Android handsets use USB-C for charging. However, this will suit businesses who already have a wide range of accessories and chargers that use Micro-USB. The cost of accessories for iOS as well as the cost of even older iPhone models is a bar for many businesses who want to provide devices to employees; the Pro works with what they already have on hand. This also keeps the handset a little thinner; the chassis actually flares out at the top around the Micro-USB port and headphone jack to save on bulk, but it still feels sturdy and comfortable.

Most of the decisions Wileyfox has made about the spec are equally pragmatic. The quad-core Snapdragon 210 processor and 2GB of RAM isn't particularly powerful, but it did fine running Outlook email and calendar, Office apps like Word, Excel, PowerPoint, and OneNote, the Edge browser, the OneDrive app and third-party apps like Twitter and Spotify. In fact, we had no problems with performance in any app except for Skype, which was slow to load messages and contact details.

There's only 16GB of internal storage, but there's a MicroSD slot for adding external storage. The five-inch screen is only 720p resolution (like other Wileyfox handsets), but it has good colour balance and brightness, and a wide viewing angle. It extremely reflective, however.

The eight-megapixel rear camera is perfectly adequate for general photography, with a decent flash and good macro functionality, so you can use it as a pocket document scanner with the Office Lens app. The two-megapixel front camera is slow and poor quality, particularly in low light -- adequate for a Skype call in a pinch, but not much good for selfies.

Some features are surprisingly good. The supplied headphones may look cheap, but they deliver excellent sound, with volume, clarity, and even reasonable bass on music. The speaker is also reasonable, although you have to crank up the volume at least halfway to hear anything, and there's a fine line between loud enough to hear and sounding a bit tinny (and there's very little bass). If you want to listen to music, pop in the headphones; for phone calls and conference calls, the speakerphone is fine.

Other features are a mixed bag. The three capacitive buttons at the bottom of the handset are welcome because Back, Home, and Search are key to how you navigate Windows Phone and it's more efficient than swiping up from the bottom of the screen to get the soft buttons on-screen. There's no camera button though, and you can't double-tap on the screen to wake the phone the way you can on many Lumias (another big time-saver).

And there are also things that annoy or disappoint. The headphone socket is at the top of the phone, which is convenient, but the Micro-USB port is next to it, which is slightly less so (if you want to use a charging cradle on your desk, the power is expected to plug in at the bottom).

Azure AD support means users can set up the phone with their business email address and get their work mail and calendar plus OneDrive for Business files straight away -- and any access policies like setting a PIN or using a second factor to prove their identity are automatically applied.

Setting up the Pro with an Office 365 account that's subject to company policies meant we saw a warning they'd be applied, had to create a PIN of a certain length and then verify identity with the choice of an incoming phone call, text message, or a mobile authenticator app.

The feature that's really missing from this business-oriented phone is biometrics: having neither fingerprint reader nor iris recognition may keep the phone's price down, but it means the only login option is a PIN. That's far less convenient for users, and admins will probably want to use the MDM options in Office 365 to make sure users with access to confidential information don't just set the option to never be prompted for the PIN after the phone locks.

The main feature of the Wileyfox Pro, is of course, Windows 10 Mobile, and businesses (and individual users) who want this know what they're getting: an OS with strong security features that fits easily into the Windows ecosystem -- from Office 365 to Skype to Edge to management tools -- and that will run any Windows Phone apps they've developed and want to keep using.

This isn't a flagship handset for Windows Phone fans, especially at £190 for this spec. The Wileyfox Pro is a transitional device for businesses who want to stay on this platform using budget hardware -- perhaps because of apps, or due to security concerns about Android. It might not be exciting, but for the businesses who need it, the Wileyfox Pro will be a welcome option.