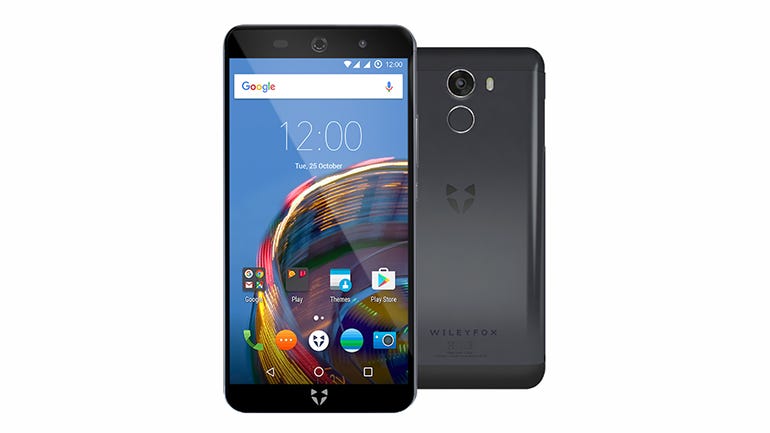 Wileyfox is that rarest of things, a British smartphone company. The firm has received plaudits for its earlier phones, and has come out all guns blazing for the holiday season with two 5-inch handsets -- the Swift 2 and the Swift 2 Plus.

The Swift 2 Plus has some upscaled features, but the two handsets are generally pretty similar. Most interestingly, perhaps, there's no difference in the size or weight of both handsets. The choice isn't between a larger and a smaller frame, but between a few internal features: Swift 2 Plus boasts a higher-resolution camera, more RAM and more storage to justify its slightly higher price.

I was sent the Swift 2 Plus to review, but here's a comparison of both handsets.

Both handsets run Cyanogen OS 13.1, an Android mod that allows for a lot of user tweaking behind the scenes. Anyone who wants to avoid fiddling and customising is free to do so, but there's a lot to play with here, and it is well integrated with Android itself, so users can't tell what's stock Android and what's a Cyanogen service.

It's worth noting that there have been some question marks over whether Cyanogen will continue in the longer term, but for now Wileyfox is obviously confident. I got an update while I was reviewing the Swift 2 Plus.

The build is solid aluminium rather than plastic, giving the handset a resilient feel and a body I couldn't flex or bend. It isn't the lightest, or the thinnest of smartphones, but it's by no means a monster. Wileyfox has toned down its logo, which was a bright orange beacon on the back of earlier models. It's now a more stylised affair that's less 'blingy' and more appealing.

A notable addition on the back of the chassis is a fingerprint scanner. This can be used for login, app sign-in and with Android Pay. NFC is here too.

The 5-inch screen's 1,280-by-720-pixel resolution is fine for watching video and reading text, and there's a LiveDisplay mode that can reduce blue light for better evening/pre-sleep use. This can be set to kick in automatically or be turned on and off manually. It's a nice touch, but overall the display lacks brightness: cranked up to the max, the screen could be a little tricky to read outside on bright days.

Keeping the backlight a bit low may be related to battery life. The 2,700mAh battery in the Swift 2 Plus did get me through a day's typical use, but by morning a full charge was needed. You probably won't want to take this handset on a weekend away without a charger. I also noticed that the device gets a bit warm while it's charging: whether that becomes an issue in the longer term remains to be seen.

The good news, though, is the fast charging: plug in the USB-C power adapter and you'll get 25 percent charge in 15 minutes, or 75 percent in 45 minutes.

The main camera is a key differentiator between the Swift 2 and the Swift 2 Plus. On the latter I found image quality passable, but not brilliant. Various camera settings can be fiddled with to improve shot quality. It's even possible to reduce image quality, although I can't see when that would ever be useful.

There are two SIM card slots -- one MicroSIM, one NanoSIM. There is logic in catering for both sizes of SIM. If nothing else, it means those who have not yet made the jump to Nano don't have to go through the pain of either swapping or cutting their existing SIM. But if you want to use a MicroSIM, you won't be able to expand the internal storage, as its slot is shared with that the MicroSD card slot.

The Swift 2 Plus comes with 32GB of internal storage. An initial boot fresh out of the box left me with just over 23GB free.

Wileyfox has done a reasonable job with the Swift 2 Plus, but this price bracket is very competitive, and other handsets, such as the Motorola G4 and Honor 5C are also worth checking out.