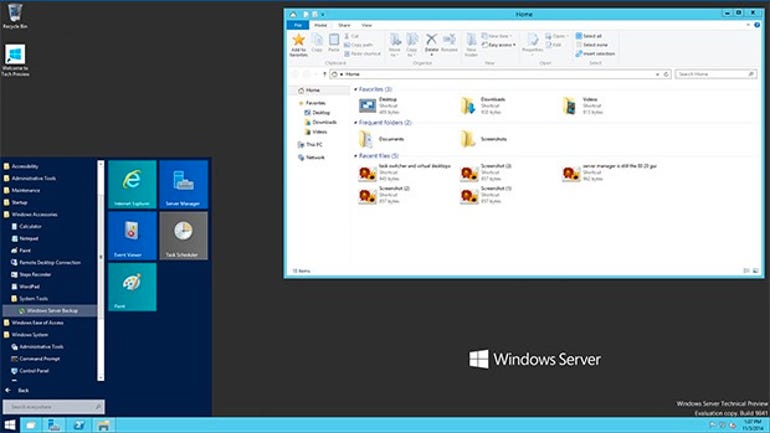 The first technical preview of the next version of Windows Server — which Microsoft isn't giving a final name just yet — came out at the same time as the Windows 10 preview . That's not just because Microsoft needs to get the same kind of feedback from server admins as it does from mainstream Windows users. It's also that there are significant changes coming in the next Windows Server and Microsoft needs to start getting admins thinking about a new world where everything is virtualised and running on commodity hardware with significant automation.

There's a lot in the next release that Microsoft has learned from running Azure (and from building its Cloud Platform System to put that on-premise as a private cloud appliance), and is ready to bring to customer data centres. Large-scale scenarios like fabric network automation — automated network discovery, active monitoring of network health and network management using PowerShell Desired State Configuration to create an abstraction and automation layer that lets you manage the fabric of an entire data centre in concert — are all about making a new control plane inside the software-managed data centre.

The software load balancer and distributed firewall that Microsoft already has running in Azure will come to Windows Server (and they'll work with virtualised network features from other vendors, although that may take some work on standards like NVGRE). Packet Direct promises huge increases in network throughput for small packets on up to 100Gbps connections. These promise to give you expensive network protection and management features, and the performance of expensive network fabrics, without expensive network hardware — although you'll need new NICs and drivers that aren't available yet.

At the other end of the scale are new storage replication and QoS services, virtual GPU support that lets you hardware-accelerate software like Photoshop running in VMs, the inclusion of MultiPoint Server as a role and a host of improvements in Hyper-V, from small to large.

Hyper-V now has secure boot support for Ubuntu and SUSE Linux ES, the ability to hot-add and remove network adapters to which you can give helpful names, the ability to increase or reduce memory for a running VM without giving it dynamic memory, and updates to virtualisation integration services via Windows Update rather than a monolithic system inside Hyper-V.

Instead of treating a VM like a real server and backing the whole thing up, you can export checkpoints of VMs (and groups of VMs) for backup and restore. That's more efficient, more flexible and less likely to run into problems if a VM fails. It still works with SANs and third-party backup tools, but will be a lot easier for backup software developers to work with than the kernel-mode drivers they had to create before, so more tools should support Hyper-V more quickly. You can also treat these as production snapshots.

VMs are no longer automatically upgraded to the latest version when you import them into Hyper-V. That means you can migrate them back to an earlier server and run clusters that mix Windows Server 2012 R2 and vNext. The Technical Preview — and more importantly the final release — will therefore be able to coexist with current versions of Windows Server in your infrastructure far more easily, letting you upgrade systems at your own pace. That's also the first piece of the zero-downtime upgrades Microsoft is promising — as with so much of the next version of Windows Server, it's a tantalizing glimpse of possibilities.

A more realistic approach to transient failures also makes clustering more useful in the real world rather than the perfect lab. If you accidentally pull out a cable or a network adapter is freezing for a few seconds and coming back, having the Failover Cluster Manager shut down all your virtual machines and move them to another server is annoying if the server will be back online as soon as you reconnect the cable. For transient failures, servers will be marked as isolated and virtual machines as unmonitored, but they won't be moved if the server comes back within four minutes (you can change that default).

If transient faults happen repeatedly, you will want to migrate your workloads; and if a server keeps getting isolated it will be quarantined. The next time it comes back online, Windows Server will automatically migrate the VMs off and take the server offline. As even repeated faults can be transient, you can set how long quarantine lasts and have the cluster manager try to use the machine again automatically in a few hours.

Features to wait for

As you'd expect, although it's usable for testing, the Technical Preview has some bugs — some of which Microsoft already has workarounds for. But even more than Windows 10, Windows Server vNext is at a very early stage of development. The kernel work to support the Docker engine is still being designed. Managing transient failures in clusters is only the first of many promised features to improve resiliency, even when hardware fails. Without System Center, which won't be in beta until 2015, you can't try out some of the key scenarios for software-defined networking.

There are significant security improvements that haven't shown up in the Technical Preview either. Virtual Secure Mode is a Hyper-V container with an isolated secure execution environment protected by next-generation credentials that use biometrics and two-factor authentication; these have fascinating possibilities for improving security, but the only server scenarios confirmed so far are protecting the logon and authentication services (even if the kernel is compromised by a boot or rootkit) and creating a virtual TPM so you can run BitLocker in client virtual machines running on Windows Server.

The breadth and depth of what's in the Windows Server vNext Technical Preview is clearly only a fraction of what will be a significant release that will give you high-end storage and networking features on mainstream hardware, make server workloads far more fault tolerant and address lots of day-to-day niggles. Early adopters will want to kick the tyres now, while most admins will want to check back next year when there will be far more to evaluate.