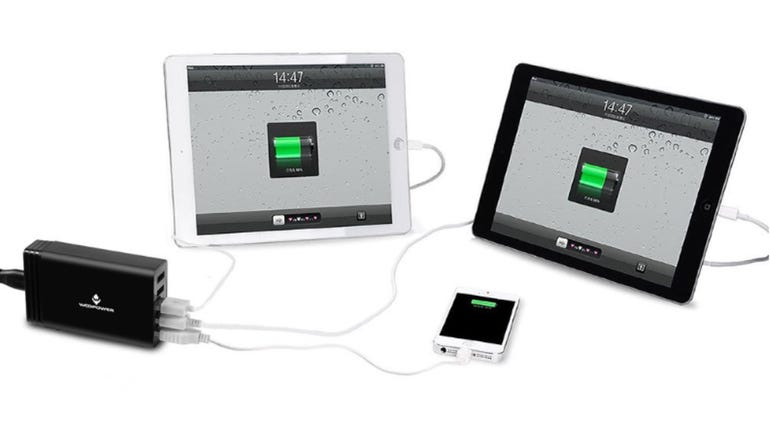 The Woopower five port USB wall charger is about the size of a packet of cigarettes and weighs 5.6 ounces. The outer casing is high gloss plastic. There is a power cord and plug in the box

There are five USB ports with LED lights next to them.These lights glow green when the wall charger is switched on, and red when a device is plugged in. When the device is fully charged the indicator LED will again glow green.

If I plugged five devices into the unit, I noticed that with some device combinations, not all of the USB LED indicators glowed red. This is because the total of the five output ports required more than the maximum charger output of 10A.

None of the other ports were affected and charged normally. Each port delivers an maximum output of 2.1A with a maximum combined output of 10A over the five ports.

If, when all ports are in use, the charger detects that a device has a current demand of over 2.4A the LED for that port will glow green. According to the user manual, this is to protect against over-current requirements and short-circuit issues.

The charger has a compact sleek design and looks neat on the desk. There are two rubber non-slip feet on the bottom of the unit to prevent the unit becoming easily scratched. The high gloss plastic did not easily mark with fingerprints.

The USB ports are not too stiff and the connectors fitted in to the device snugly. For under $20 the build quality is good.

Overall, this is a nice compact wall charger. Although it does not have as many ports as the iClever charger I reviewed, or a device stand like the EasyAcc charging dock, this is a streamlined charger that does its job well.