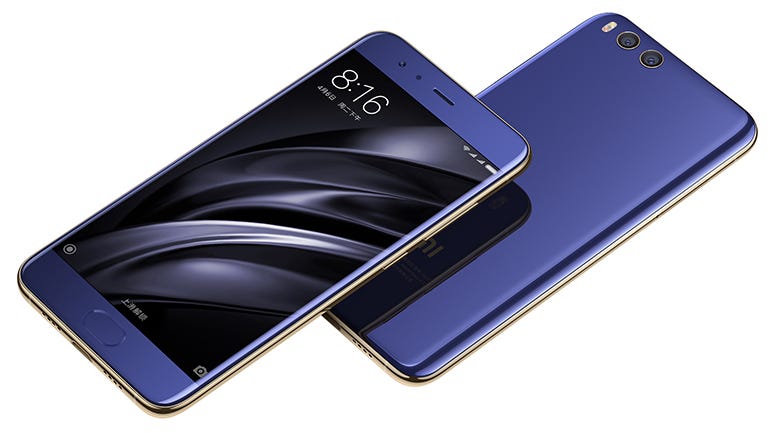 At the moment the phrase 'Android flagship' means a device packing Qualcomm's latest Snapdragon chipset, the 835. And by some margin the cheapest way to get hold of one of those is in the new Xiaomi Mi 6. At the time of writing you can get your paws on one for under £400 plus import duty. That's around £250 less than the HTC U11 and £280 less than the Samsung Galaxy S8. I suspect it will even undercut the soon-to-be-announced OnePlus 5.

Since the Mi 6 has yet to be officially released in the USA or Europe, and may never be, the only way to get one is via an importer. One such is GearBest, who supplied my review device. The upside of buying a phone this way is that you save money: the downside is the absence of manufacturer after-sales support and a few other niggles.

There's no doubt that the Mi6 looks and feels the flagship part. The front and back panels are made from Gorilla Glass 5 and are joined together almost seamlessly by a stainless steel band. This makes the Mi6 a very solid, svelte and smooth smartphone.

There is rather more bezel on show than with the likes of the Samsung Galaxy S8 and Xiaomi Mi Max, but it's nothing too hard on the eye. According to my rough calculations the Mi 6's screen takes up about 71 percent of the front. That compares to the S8's 84 percent and the iPhone 7's 65 percent.

My piano black version doesn't show the design off to its best. The blue and gold model is the true stunner in the line up. The glass back does make it quite slippery, but Xiaomi bundles a silicon cover to stop it sliding about.

Physically the Mi6 is rather petite. That's largely down to the smaller-than-flagship-average 5.15-inch screen. Of course that's still significantly larger than the iPhone 7's 4.7-inch panel, so it's not a stick I can beat Xiaomi with too viciously.

Measuring up at 70.5mm wide by 145.2mm deep by 7.5mm thick, the Mi 6 comes as something of a relief after the slew of 5.5-inch and above devices I've been using of late. Having all the screen and the under-glass fingerprint reader within easy reach of my thumb was a pleasure I'd forgotten. The only small negative is the weight: at 168g it weighs 30g more than the iPhone 7, while the more expensive ceramic version weighs 182g.

The 1,080-by-1,920-pixel IPS LCD display may be a bit on the small side but it's very bright and colourful, and with a pixel density of 428ppi I defy you to tell it's not of a higher resolution. Personally I'm happy to forgo 4K bragging rights in return for extended battery life. The quality of the display is matched by the audio: using the earpiece as a second speaker makes the Mi 6 a genuine stereo device; there's ample volume on tap and it all sounds very composed even when turned up to the max.

The octa-core Snapdragon 835 chipset and 6GB of RAM make the Mi 6 an absolute powerhouse. If you want the full lowdown on the Snapdragon 835 and its Kyro 280 cores, check out this article by ZDNet's Matthew Miller. In short, the Mi 6 returned some of the highest benchmark scores of any Android device I've ever tested, including the new Samsung Galaxy S8 which uses the same SoC but with 4GB of RAM. In everyday use it goes like the clappers.

The Mi 6 runs Android 7.1.1 Nougat under Xiaomi's MIUI overlay so the first thing I did was install Nova Launcher, which reintroduces the apps tray that MIUI dispenses with. MIUI does have a few useful features though, including the ability to run two instances of the same app side-by-side. This Dual Apps feature is handy if you want to run two WhatsApp or Twitter accounts at the same time.

The other signature feature of MIUI is the ability to create entirely separate sets of home screens using something called Second Space. There's a wide array of options to change the permissions and security settings of the apps on the device; MIUI can also prevent apps from auto starting, which can do wonders for your battery life.

In the negative column, because MIUI 8 looks and works the same on all versions of Android since 4.4 KitKat it restricts some of the newer features of Android such as the ability to reply to messages from within the notification bar.

At the time of writing there's no official international Xiaomi ROM for the Mi 6 and Xiaomi's Chinese ROMs lack the Google Play Store and the Google apps suite. My device was delivered with what's called a 'vendor ROM' installed. This looks and works much like an official International ROM, with all Google's apps baked-in but there are questions about support for Xiaomi-originated OTA updates.

GearBest says that that the ROM on the devices it ships will support OTA updates from the manufacturer. However, judging by the messages generated by the Mi 6's update app and the problems I had connecting to the Mi PC Suite, I have my doubts. Until an official Xiaomi global ROM becomes available -- there are rumours that the Mi 6 will be launched in India in July, in which case a global ROM should make an appearance then -- you're stuck with Android 7.1.1 and MIUI 8.2.

The MI6's photographic offering is straight from the iPhone 7 Plus playbook courtesy of dual 12MP cameras. One is a 27mm, f/1.8 affair with four-way optical image stabilization while the other is a 52mm, f/2.6 telephoto snapper with x2 optical zoom.

As a casual photographer I can tell you that the camera is very fast, the user interface idiot-proof and the available filters and manual overrides impressively comprehensive. The options to shoot video at 2160p/30fps, 1080p/30fps and 720p/120fps slow motion have most bases covered, although a 1080p/60fps mode would have been nice. The HDR setting does a good job of brightening up pictures without going over the top.

For a more nuanced take I handed my Mi 6 over to a professional photographer acquaintance for a few days. His opinion was that while he couldn't recommend the Mi 6 in preference to his iPhone 7 Plus, the Mi 6 did a creditable job and only let itself down with occasionally artificial bokeh effects and average OIS. That was for stills photography. When it came to video he was less impressed, calling the Mi 6 'mediocre'.

In short he reckoned if the iPhone camera rated 9/10 the Mi 6 deserved a solid 7.5/10. I suspect Xiaomi, and the majority of users, will be happy with that. If you get your kicks taking pictures of yourself rather than of other things, the 8MP front-facing camera has you well covered.

A 3,350mAh Li-Po battery may not sound a whopper by modern standards, but it's 350mAh more than the Galaxy S8 can boast and it has less screen acreage to power. The end result is pretty impressive battery life. Getting more than 12 hours of video playback is a cinch, and when using the Mi 6 as my everyday smartphone I was regularly able to achieve 48 hours before needing to recharge. That's a feat very few devices can match.

Drawbacks? Well, in an Apple-aping step too far, Xiaomi has dispensed with the 3.5mm audio jack -- apparently in order to make the battery to be a little bit bigger. Granted there's a Type-C to 3.5mm adapter in the box, but this is a feature that will drive you nuts come the day you lose that bundled adapter, or want to listen to music and charge at the same time.

Secondly there is no storage expansion. You have to make do with the 64GB (about 56GB after system requirements) that's built in. I can live with this, but I know some users won't be able to. Also, despite the absence of a 3.5mm jack, the Mi 6 is merely 'splash resistant' rather than IP-rated waterproof. According to teardowns I've seen, the unsealed Type-C USB port is the leaky culprit.

Finally, keep in mind that being a Chinese device the Mi 6 may not play nice with your network. For the record it supports FDD-LTE B1/B3/B5/B7/B8 and TD-LTE B38/B39/B40/B41. Being an EE customer I had no problems, but mileage with other networks may differ -- especially if it depends on the 800MHz Band 20 for 4G. Thanks to the Mi 6 being a dual-SIM device you can work around the problem, but it's still a bit of a hassle.

For the price it's hard to argue with the Xiaomi Mi 6. The latest Snapdragon chipset makes it more powerful than you can conceivably need, the camera offering is solid, battery life excellent, design and build quality absolutely tip-top while the smaller-than-average package will appeal to those who think Android flagships are quite literally getting too big for their boots. The usual caveats apply when buying a device that's not fully vendor-optimised for the UK market, but for less than £400 something's got to give.

Editor's note, 15 June 2017
A Global ROM is now available from Xiaomi, clearing the update path for the vendor ROM in the review unit.