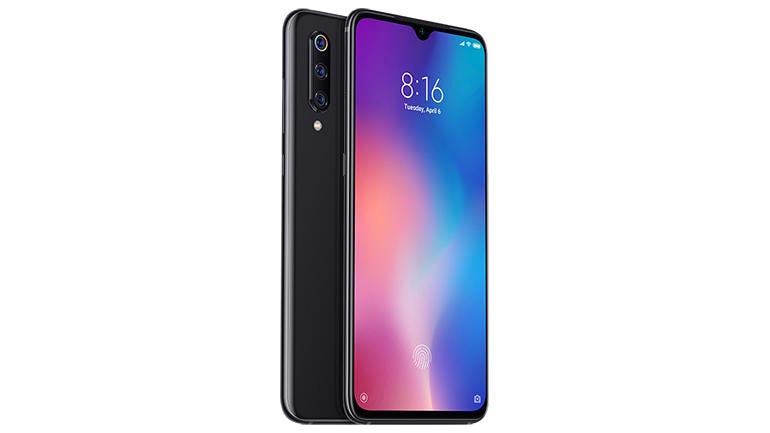 Although it's a relative newcomer to the UK smartphone market, Xiaomi is making an impression with new products appearing at a brisk pace. I reviewed the 6.21-inch Mi 8 Pro only last November, and already the 6.39-inch Mi 9 is here. In between I've had my hands on the Mi MIX 3, a quirky slider design, and the affordable flagship-class Pocphone F1.

Like its predecessor, the Mi 9 offers high-end specifications at a mid-range price. At the time of writing, UK pricing has not been confirmed, but the European launch price is €449 for the 64GB version and €499 for 128GB, which would mean sterling prices of around £390 and £430. Given that this handset is based on Qualcomm's latest Snapdragon 855 chipset and that it has a 48MP main camera, appetites should be whetted.

There is a minimalist look to the Xiaomi Mi 9, which is just 7.61mm thick, with the long edges curving gently into the glass back. My Piano Black review sample was excessively reflective and extremely slippery, although it wasn't too much of a fingerprint magnet. Xiaomi provides a rubber bumper with the Mi 9, and fitting it helped with grip – but also meant the fancy glass back was obscured.

Xiaomi says the glass back has a 'holographic' design. Well, to me it was more like a mirror, but perhaps one or both of the other two colours – Ocean Blue and Lavender Violet – have this quality.

The three camera lenses sit in a slightly raised lozenge at the top left of the back. A raised camera housing is not unusual, but if you like the Mi 9's general minimalism you might feel it disturbs an otherwise clean look. There's no fingerprint sensor here – as on the Mi 8, this is built into the screen. Xiaomi says the in-screen fingerprint reader is 25 percent faster now: I found it quick and easy to use, with none of the slight delay I noticed with the Mi 8.

The right side houses the power and volume buttons, which share the black colouring of the back. They are raised well enough to be easily found when the phone is in a pocket. The left side has the dual-SIM caddy and another button called the 'AI button', which by default launches Google Assistant. It can be configured to do other things, on both a press-and-hold and a double press.

The top edge has an IR blaster, and there's an app on board called Mi Remote that you can use to control TVs, smart boxes and other equipment.

On the bottom is a USB-C port (Xiaomi providers a converter to 3.5mm) and twin speaker grilles fronting a single speaker. The speaker delivers plenty of volume, but audio quality is average – too treble-rich for comfort at higher volumes. Given that the Mi 9's powerful processor could appeal to gamers, this is disappointing.

I've already mentioned that this is a thin phone (7.61mm). It's also quite small considering the 6.39-inch screen, which squeezes into a body measuring 74.67mm wide by 157.5mm deep. There's very little bezel along the long edges, though a few millimetres of bezel is noticeable along the bottom edge. The screen to body ratio is 85.14 percent.

A tiny notch at the top houses the 20MP selfie camera. This is slightly differently styled to the 'teardrop'-style notch found on the likes of the OnePlus 6T, but the minimalist aspiration is the same, leaving plenty of room for notification icons.

The AMOLED screen has a resolution of 2,340 by 1,080 pixels (403ppi) and delivers excellent image quality across the board – video, websites, documents. You can tweak screen colour and contrast, with settings available for 'default', 'warm' and 'cool' colour temperature.

The UWA lens is a real winner. It's easily switched on and off using a toggle button inside the viewfinder, and it lets a lot more information into an image all round. Because it's so easy to use, I could see myself using UWA mode a lot if the Mi 9 was my regular phone.

Anything shot in portrait mode using either the front or the main camera can have bokeh, light trail and lighting effects added as post-production options. Video is available at 4k resolution and 30 frames per second (fps), and there's the usual slo-mo mode as well (1080p at up to 960fps).

The handset puts a notification mark on each photo taken with the main camera, telling you something about the shot including the fact that it was taken on the Mi 9. This is easily turned off if you'd rather not have what's basically an advertisement stuck into your photos.

I mentioned at the outset that the Xiaomi Mi 9 runs on Qualcomm's Snapdragon 855 chipset, which is state of the art right now. Not surprisingly, supported by 6GB of RAM, it delivered extremely impressive benchmark results – average Geekbench 4 scores of 11322 (multi-core) and 3533 (single core). By contrast, the Kirin 980-based Huawei Mate 20 Pro scores 9772/3331 and the Snapdragon 845-based OnePlus 6T scores 8854/2373 (multi core/single core, figures from Geekbench).

My review unit has 128GB of internal storage, of which 12.48GB was used out of the box, leaving 115.52GB free. A handset like this needs plenty of free storage for all the video, games and other media that users may well want to store on it. There's no MicroSD card slot, which may make the 64GB variant a little light on storage.

The other thing a handset like this requires is stamina. While the Mi 9's 3,200mAh battery might seem short on capacity compared to the 4,000mAh units in several recent flagship phones, the Snapdragon 855 chipset is power-efficient: the Mi 9 managed 10 hours and 51 minutes from a full charge under the Geekbench battery test, for a score of 6510. This puts it in the higher echelons of the Geekbench battery benchmark results. Anecdotally, I didn't run out of power on any day of testing.

The Xiaomi Mi 9 runs on Android 9 Pie with the MiUI overlay on top. There are a couple of additions to the Android standard apps, including a music player, the Mi Remote app, Opera browser, a nice little notes app and a reasonably good file manager. There are also some settings tweaks, including a dark mode for the display. It's all pretty light-touch.

It's difficult to find serious fault with this handset. I'm not the biggest fan of the slippery glass backplate (although a provided bumper helps here), or of the way the camera software includes advertising on each shot (although this can be disabled). The Snapdragon 855 processor is very nippy, there's lots of on-board storage, the AMOLED screen is great, battery life is good, and the IR blaster is a nice extra.

My main gripe is the poor-quality speaker. If that were better, I'd be recommending the Xiaomi Mi 9 with no caveats. Even so, this is probably the best mid-priced smartphone available right now, and those a bit further up the price ladder should be looking over their shoulders.

OnePlus 6T review: Outstanding reception, solid battery life, and extremely fast performance make this one to buy
OnePlus just released its first phone in partnership with a US wireless carrier and early indications are that sales were brisk. The in-screen fingerprint scanner works well, the phone is very fast, cellular performance is stellar, and you will go a full day with the large capacity battery. Run to T-Mobile and buy this phone now.

Best Android phone for business: One month with Samsung Galaxy S10 Plus
We are just getting started with 2019 phone releases, but it is clear that the Samsung Galaxy S10 Plus sets a high bar for others this year. Huawei just announced its newest phone and it looks like a serious challenger for those outside the US.