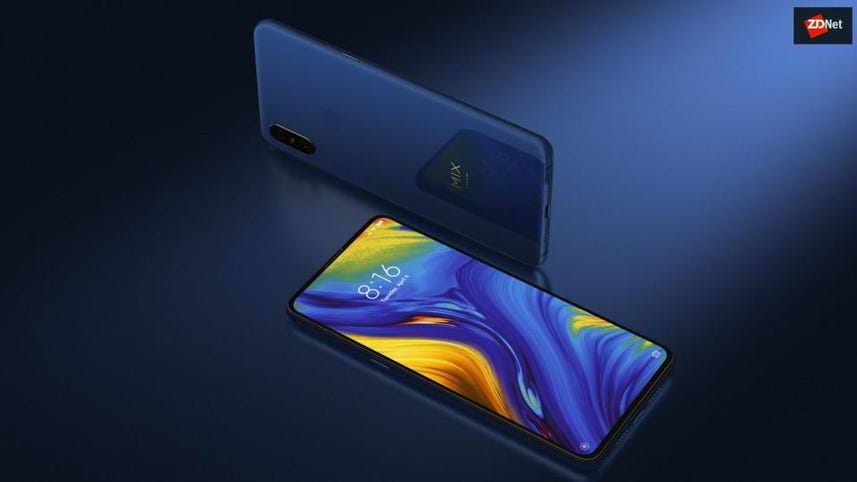 After Xiaomi entered the UK smartphone market with its flagship £499 (inc. VAT) Mi 8 Pro late last year, it was clear that leading mid-range handset makers like OnePlus and Honor had some serious competition.

Now Xiaomi has brought another £499 handset to the UK in the shape of the Mi MIX 3. The Chinese company's new flagship smartphone features an ingenious sliding screen that hides the twin front cameras, and a bundled wireless charging pad.

The novel sliding screen will grab most attention, but when the price of this handset is taken into account, there's plenty more to applaud.

An immediate result of hiding the cameras away behind the screen is that an upper bezel is no longer required. This means Xiaomi has been able to achieve a claimed 93.4 percent screen-to-body ratio, squeezing the 6.39-inch, notch-free display into a chassis measuring 74.69mm wide by 157.89mm deep by 8.46mm thick. (Without wishing to be churlish, our favoured screen-to-body ratio calculator puts the figure at 85%.)

The 6.39-inch AMOLED screen has a resolution of 1,080 by 2,340 pixels (19.5:9 aspect ratio, 403 pixels per inch). Watching video on this screen is a great experience: colours are vibrant and contrast is superb. You can change the colour settings on the warm/cool scale, and there's also a reading mode that you can set to a timed schedule, sync with sunrise and sunset, or toggle manually. If it could be link to the launch of specific apps as well, that would be even better.

The Mi MIX 3 is a little heavy at 218g, but it's a big phone, and the slide-out front camera system adds a little weight. It slides smoothly though, and the mechanism starts the camera software running, ready for you to shoot a selfie. There's a somewhat superfluous 'trill' when the camera emerges, but at least there's a selection of sounds to choose from. You can also have the slider open some apps rather than go straight into the camera app.

I do wonder whether the sliding screen will prove to be a dust trap, and also note that the mechanism could be easier to initiate as there isn't a lot to grip onto to create friction. The screen itself is slippy, while the backplate is also smooth and reflective. Also, it's probably not coincidental that the Mi MIX 3 does not have an official IP rating for dust/water resistance.

My review handset was a shiny and rather appealing Onyx Black; the Mi MIX 3 is also available in Sapphire Blue.

Nestled in the backplate is the small round dimple of a fingerprint scanner. In-screen fingerprint readers are increasingly common, but this rear-mounted option was effective enough.

The right side has a power button and a volume rocker, and there's a button on the left side with both press and press-and-hold functions. By default both functions open Google Assistant, but both can be changed to perform various tasks including turning on the flashlight, turning on reading mode, or having no effect. I ended up disabling the button completely as I found it a little too easy to press by accident, but it's nice to see some hardware innovation.

A software feature called Quick Ball complements this button. This is a small on-screen button that opens up a range of tappable shortcuts. Quick Ball can be used whatever else you're doing, and is designed to help you navigate the handset at speed one-handed. Its five shortcut options can be set to launch apps, activate particular services like the torch or toggling silent mode, and more. It's not particularly well advertised and isn't enabled out of the box: you'll find it hidden away in Additional Settings.

There is no 3.5mm headset jack, so you'll have to either use the USB-C port, go wireless or use the integrated speaker. That latter is of average quality, delivering fairly good volume but lacking bass tones.

The Mi MIX 3 has a 3,200mAh battery which delivered a creditable 6 hours 39 minutes of life under the Geekbench 4 battery benchmark, gaining a score of 3990. In everyday use I managed a day between charges, and the quick-charge facility made it easy to deliver a boost while getting ready to go out if I thought battery life might not see me through.

Most impressively, Xiaomi also provides a 10W wireless charger. This is a nice extra.

The Mi MIX 3 supports two SIMs and is powered by Qualcomm's Snapdragon 845 chipset — as found in the Mi 8 Pro, and many other flagship-class handsets -- with 6GB of RAM. Performance under Geekbench 4 was pretty good, with an average multi-core score of 9053 and a single-core average of 2429. Multi-core performance isn't quite up to the level of the Mi 8 Pro (9120) or the Kirin 980-powered Honor View 20 (9767), but these handsets both have 8GB of RAM rather than 6GB.

There is 128GB of internal storage, of which 10.12GB was used and 117.88GB was free on my review unit. There's no option to replace one of the SIMs with a MicroSD card. The operating system is Android 9 with Xiaomi's MIUI 10 overlay, which adds new features to the settings area plus tweaks like the Quick Ball and a file manager. Preinstalls of the Opera browser and Facebook might irritate some users, but they can be uninstalled if surplus to requirements.

It's all very well having a fancy sliding front camera mechanism, but shots need to be worth taking. Xiaomi has opted for a dual front camera setup, with a 24MP main unit and a second 2MP sensor for depth sensing. There's is also an LED flash for shooting in darker conditions. This arrangement worked well, although I'm not entirely convinced that the flash is necessary.

The rear camera setup comprises two 12MP sensors, one with a wide-angle lens and one with a telephoto lens. An AI component makes a good job of automatically choosing settings for particular conditions. The panorama mode produced some nice shots, and I also found it easy and effective to use background blurring through the main camera. Overall, the cameras, both front and back, perform well.

The Xiaomi Mi MIX 3 is an impressive mid-range handset with a near-bezel-free screen thanks to its front camera slider. However, the phone is slippy to grip, and I worry that the camera area might get dusty over time or be a point of entry for moisture.

I'm getting used to the comeback that IR blasters are making in handsets at the moment and would like to have seen one here, but the bundled wireless charger is a nice touch.

Samsung's foldable smartphone: I want one, but no clue what to do with it
Samsung's likely tease of a foldable device will highlight something well beyond vaporware, but the use cases remain a bit of a mystery. Maybe it won't matter.

Google's 2019 hardware plans? New Pixel 3 Lite to undercut iPhone XR
Google is thought to be planning a major push on hardware, with new phones, a watch, a security camera, and a refreshed smart speaker.

LG G8 ThinQ to have OLED screen as speaker
LG's G8 ThinQ smartphone will have the company's Crystal Sound OLED tech it first applied in its TVs, that uses the screen as a speaker.