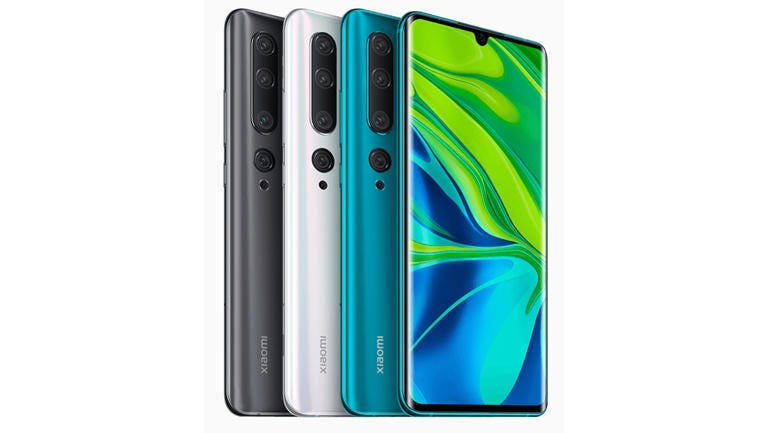 Xiaomi is on a mission to bring high-end specifications and stylish handset design within reach of those on restricted budgets. The Chinese company is making a good showing, with its £399 Mi 9T Pro the most recent of its stable to earn praise from ZDNet. Xiaomi's latest flagship-class handset is the 6.47-inch Mi Note 10, which offers a rich set of features including a large 5,260mAh battery and a 108-megapixel main camera. It's not officially available in the UK yet (but due soon), but has a list price of €549 (~£466).

Xiaomi is consistently good at producing handsets that look much more expensive than they are. That's certainly the case with the Mi Note 10, whose shell features curved glass on the front and at the back, making the long edges thinner than the short edges. The curves lend a premium look and feel to the handset, while Gorilla Glass 5 on both front and back means the chassis should be pretty scratch-resistant.

While the curves are helpful when it comes to gripping this large phone, the back of the handset's smooth, slippery surface makes it easy to drop and caused it to slip off my armchair regularly. It's a real hassle having to think twice about finding a non-slip surface on which to rest the phone.

Xiaomi does provide a silicone bumper, but of course this adds bulk and completely obscures the back, which in the case of my review handset was a deep, dark black that Xiaomi calls Midnight Black (Aurora Green and Glacier White versions are also available). The bumper performs a second useful task by mitigating the large lozenge that houses three of the five rear cameras: without the bumper this protrudes significantly, which I found irritating when gripping the handset.

Xiaomi has found space for a 3.5mm headset jack in the bottom edge, where it sits alongside the USB-C port and a single speaker. Audio quality from this speaker is pretty good, and maximum volume, while a little low, doesn't distort. That's a compromise I can live with. However, only one landscape orientation is viable if you're using audio -- the one where the speaker is not crushed into the palm of one hand, muffling the sound.

While the chassis looks good there's no IP rating for dust and water resistance, even though the front camera sits in a notch rather than being a mechanical pop-up as in the Mi 9T Pro. I'm fine with that: it's a hassle waiting for a camera to pop out if you want to take a selfie, and pop-ups are too slow for face login. The notch here is probably as small as it could possibly be.

The 6.47-inch AMOLED display, which has a resolution of 2,340 by 1,080 pixels (398ppi) is delightful, with deep and rich colours. That little camera notch is easily forgotten, even when watching catch-up TV.

The handset has two SIM slots, but there's no option to use a MicroSD card in one of them. If you need two SIMs plus MicroSD expansion, there are options in the mid-market segment -- take a look at the Oppo Reno 2Z, for example. The Xiaomi Mi Note 10 has 128GB of internal storage, of which 16GB is used by Android 9, the MIUI 11 overlay and various pre-installed apps, leaving 112GB free.

MIUI is pretty inoffensive, although there are some features that you might toy with for a few minutes and then ditch. The idea of having a kaleidoscope pattern on the lock screen might sound nice, but the novelty soon wears off. Sweeping left on the home screen accesses a mishmash of shortcuts to tools and apps. This is hardly unique, and while I rarely use screens like this on a phone, if you do, it will be handy.

Then there are the built in apps. Some double up on Android's offerings (such as browser, gallery, music) and some are from third parties (Facebook, Netflix). These can't be deleted, but if they are surplus to requirements you can collect them up in a folder and ignore them. There's also an irritating 'promoted apps' bar that pops up when you open the More Apps folder containing some of the third-party apps.

What I do like is MiRemote. There's an IR blaster on the top edge of the handset, and the MiRemote app can control any IR device you want -- provided you add the relevant data into the handset. The app walks you through this process. I didn't stuff this app into that file-and-forget folder.

I was unable to fully test the life of the 5,260mAh battery, because the PCMark 10 battery rundown test refused to complete, bailing out at various different points on multiple attempts. This is a shame as the battery is considerably larger than most and comparative data would have been useful. Anecdotally, I managed to get through a day-and-a-half without recharging on lighter-usage days. That's less than I'd hoped for, but perhaps there will be a software fix that extends life further. Fast (30W) charging is available, but there's no wireless charging capability.

The camera array is probably the Mi Note 10's most noteworthy feature, and the five rear cameras in particular. These include a 108MP main sensor with an f/1.69 wide angle lens and OIS that uses pixel binning to produce images that top out at 27 megapixels. This provides plenty of 'zoomability' into finished images, which anyone who likes a bit of post-shooting tweakage should appreciate.

Images zoomed to 50x on the handset are necessarily grainy, and shooting requires a very steady hand even with OIS. Getting around the camera app is more fiddly than it should be. Macro mode seems only available if you go into Pro mode and then scroll along the under-viewfinder options till the macro options becomes available. I'd prefer it to permanently sit on the mode scroller beneath the viewfinder. Going via Pro mode is also the 'quick' way to switch into ultra-wide and telephoto modes.

Xiaomi probably needs to think a bit about the camera's interface to make accessing these options easier. For all that, and the problems with 50x zooming, this is a very capable camera suite, and especially impressive on a mid-range handset.

The front 32MP camera also uses pixel binning, to produce 8MP images -- again, this could be useful for those who like to crop or otherwise play with their selfies.

Xiaomi has gone all out for an impressive camera setup with the Mi Note 10, and, with a couple of caveats, has achieved its goal. Access to some features can probably be made easier via a software update. Elsewhere, the solid chassis, good speaker and AMOLED screen are all plus points. However, the mid-range Snapdragon 730 chipset might concern some, and battery life seems shorter than you'd expect from a 5,260mAh unit.