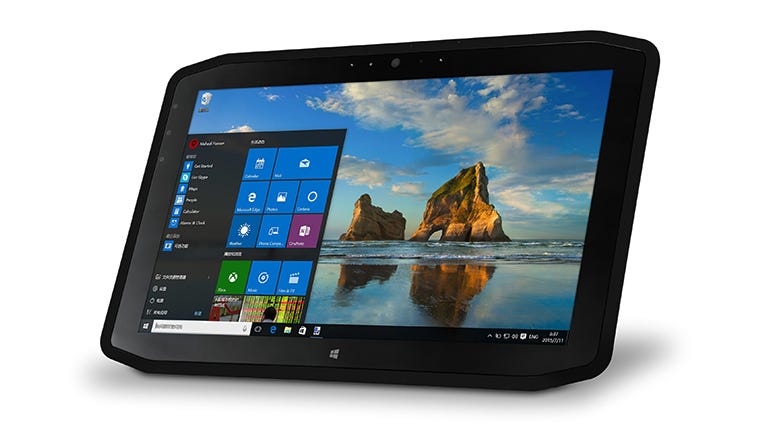 Xplore is a specialist maker of rugged tablets for use in demanding environments. Last year I reviewed the company's XSLATE D10, an Android tablet. However, Xplore's core business is Windows-based tablets such as the XSLATE R12, which runs Windows 10 Pro.

As is expected of a tablet designed to survive the harshest of operating conditions, the XSLATE R12 is appropriately certified. It meets the MIL-STD 810G standard for a broad range of environmental factors, has an IP54 rating for dust and water resistance, and is C1D2-compliant for use in hazardous locations. The screen is protected by Gorilla Glass 4.

Of course, these requirements rule out any possibility of a thin, light or svelte device. The XSLATE R12's 12.5-inch display is wrapped in a protective chassis that give the tablet overall dimensions of 328.5mm wide by 207.5mm deep by 19mm thick, and a weight of 1.34kg.

There's a sizeable rubber buffer all around the edge of the device. Along with a rubberised back this should help with protection against drops as well as when the tablet is rolling around in a vehicle. The back is very heavily stippled, to assist with grip, even by gloved hands. The long edges are angled inwards at their corners, mitigating an otherwise fairly slab-like appearance.

The 12.5-inch screen only offer FHD resolution (1,920 x 1,080 pixels, or 176ppi), but text is legible, and video looks fine too. The screen provides a generous 800-nit brightness, which makes for good viewability in most lighting conditions. There's an anti smudge finish to the touch panel, and an ambient light sensor helps set brightness to an appropriate level for the prevailing conditions. For all that, I found the screen to be a little reflective.

A stylus sits in a housing on the upper right edge of the chassis and is attached to the body by a cord so it can't be lost. The stylus only fits into its housing in one orientation (I can imagine the frustrated outbursts of some users as they battle to stow it away).

There's an optional Companion Keyboard that was provided with my review unit. When not in use this fixes to the underside of the XSLATE R12 by magnets, with the keys on the inside and the same rubberised stippled finish as the underside of the slate itself on the outside, so that it looks like an integral part of the tablet.

The magnets are pretty tough, but I'm not sure they are entirely secure and would have liked some sort of clip for added security. The keyboard adds 460g of overall weight.

The keyboard is well made. Keys are responsive and there's very little flex during typing. The touchpad allows for cursor control and is responsive to Windows gestures. The keyboard incorporates a kickstand from which it can be entirely removed. The stand holds the keyboard very securely at a rather high angle that is ideal for use while standing. Connection between keyboard and slate is wireless, and the keyboard is charged directly from the slate.

The Xplore XSLATE R12 body houses protruding rubberised triangles designed to be easy to hit with gloved hands for power on/off, volume and a 'security button' that provides access to the lock screen (equivalent to Ctrl-Alt-Del on a keyboard).

A battery charge indicator on the left short edge glows green when the battery is full and amber when it's low or charging. A bay of five LEDs on the battery pack provides more granular information about power status when a small adjacent button is pressed.

MicroSD and MicroSIM slots are located beneath the removable battery on the back of the tablet. This makes it trickier than usual to swap external storage, but it also makes for extra protection. There's also a SmartCard slot under the battery. If the battery is removed there's a reserve of one minute's power before the device automatically goes into sleep mode.

A fingerprint reader is integrated into the right edge just below the stylus housing. There's an 8-megapixel camera on the back and a 2-megapixel front-facing camera.

Various configurations of the Xplore XSLATE R12 are available. I was sent a unit based on a 7th-generation Intel Core i7-7500U with 8GB of RAM, a 512GB SSD, WWAN support, Windows 10 Pro and the Companion Keyboard. The cost for this configuration was a hefty £3,208 (ex. VAT).

Configuration options include a 6th-generation Core i5-6200U processor, Windows 8.1 or Windows 7 Professional, and 256GB or 128GB of SSD storage. An option called the SlateMate adds a barcode scanner and an RFID reader.

There is a cooling grille on the left edge of the device. I didn't do anything particularly challenging to the system during testing, yet the fan kicked in rather loudly, and fairly often. At times it was reasonably quiet, at others irritatingly loud as air was pushed out through the vent rather fiercely. Even with plenty of fan action going on, the underside of the device was not entirely cool. The heat level was never a concern, but it was discernible.

There has been some additions to Windows 10 including an app called Xplore Tablet Centre, which provides control over various settings -- relating to power and touch features, for example. Three soft buttons on the upper left screen bezel can also be configured via Xplore Tablet Centre to provide quick access to functions or apps with tap and tap-and-hold responses. You can set these to perform different actions depending on screen orientation, providing for lots of permutations.

Xplore quotes battery life at over 9 hours, but it's difficult to ascertain how well the battery will perform in real-world situations as these will vary widely. That said, I found the battery depleted rather rapidly with the screen at its brightest setting, even with very little demand on other subsystems.

For example, in one two-hour session I set the screen to 100 percent brightness and spent about half the time browsing the web and streaming video, the other half doing nothing more than leaving the device on with no web or app activity at all. During this time, the battery went from 95 percent to 55 percent.

The 800-nit screen is the main cause of battery depletion in this case. In real-world situations the ambient light sensor will adjust screen brightness according to local lighting conditions, and this will help users get longer life. However if you work outdoors, with the tablet facing a bright sun, the screen will become brighter to compensate.

The Xplore XSLATE R12 is properly rugged, and the method of carrying the Companion Keyboard is well thought-out. The keyboard is also a well-made piece of kit in its own right, and the trio of configurable soft buttons will prove useful in the field. However, battery life was disappointing on our Core i7-powered review unit with the 800-nit screen set to 100 percent brightness.