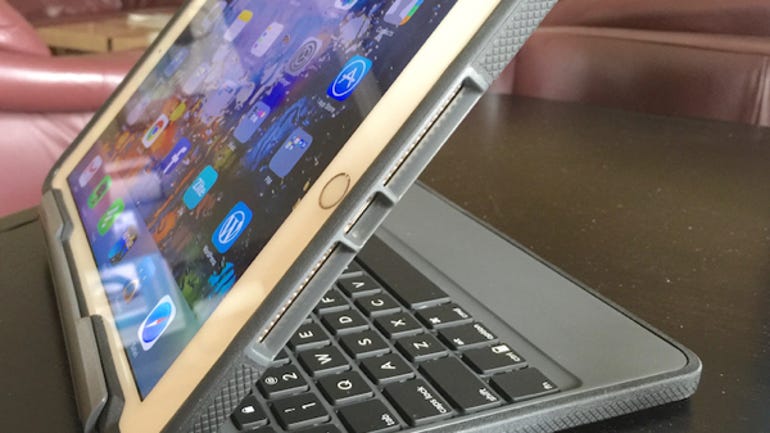 Keyboard cases by ZAGG are some of the best available, and this rugged model is par for the course. It provides a decent level of protection for the iPad Air 2 without being too bulky or heavy. It has the versatility of thinner cases as it can be used in four modes.

Much like the Rugged Folio for the iPad mini I reviewed last year, the Rugged Book for the iPad Air 2 uses layered material reinforced with rubber coating to make the case rugged while keeping it light. It's about an inch thick, but that's not an issue when using it as a laptop.

The Rugged Book has cutouts for the Lightning and audio jacks, but not for the power nor volume up/down buttons. You have to push in on the marked spots on the rubber case, requiring a lot of force to engage the iPad buttons underneath. There are two cutouts for the tablet's stereo speakers.

The four configurations the Rugged Book supports are tablet, laptop, viewing, and book modes. The iPad in the lid detaches from the keyboard unit for use as a tablet. Turn the iPad around and insert it into the magnetic hinge and you have viewing mode, with the keyboard base as a stand. Laptop mode is the default when opened with the iPad and keyboard forming a clamshell format. Last and in my view least, placing the iPad facing backwards in the hinge and closing it is book mode. It makes little sense to do the latter configuration when you can simply detach the iPad to minimize the weight.

The keyboard unit is charged with an included microUSB cable. You won't need to do that often as ZAGG claims a battery life of two years. Using backlighting on the keyboard, toggled by the Fn-right arrow key combo, will impact battery life.

ZAGG has leveraged its experience making keyboards and the one in the Rugged Book shows it. The keys provide a great typing experience with low profile yet good key travel. The top row has the expected iOS control keys, e.g. volume controls, home key, and unlock keys among others. While a little smaller, the keyboard feels like those on good laptops.

The rightmost key on the top row is a power button that turns red when you turn off the keyboard. You won't do that often as it goes into standby with a short interval of non-use. The LED under the power button also indicates remaining battery life when the Fn-Ctrl key is pressed.

Using the iPad detached from the keyboard provides a reasonable tablet experience, although given the ruggedized case it's bulkier and heavier than other cases. The extra weight is a reasonable tradeoff as having the protective case gives peace of mind in the event of drops; even so, the lid case does feel lighter than expected. A ruggedized case is heavy by design, and if you don't have a specific need for one a traditional thin keyboard case is probably a better choice.

The only gripe I have about the ZAGG Rugged Book is the magnetic hinge. While it makes it easy to remove and replace the iPad in the base unit, occasionally the tablet comes out too easily. This can happen when opening the lid and when pushing the iPad back while adjusting the viewing angle for laptop use. It doesn't happen every time but even infrequently is too often.

Writing with the Rugged Book configured as a laptop is my preferred method, as it minimizes the negative effect of the thick form of the case. The keyboard works very well and I can type almost as fast as on a full-size laptop. A thoughtful touch by ZAGG is the small cutout at the bottom of the iPad case that allows accessing the Control Center by swiping up. Many designs overlook this, preventing easy access to this iOS feature.

The ZAGG Rugged Book is available from ZAGG, Amazon, and major retailers. It is currently priced at $137.75 at Amazon.