Until you own a new fourth-generation Apple TV, you can't fully appreciate how frustrating it is to use.

Apple's set-top box was the cause of more arguments in my house from when it arrived in November than any other piece of tech over the whole year. The box comes with a new remote control, which would go on to become one of the most difficult and unpredictable gadgets in my tech-driven house. 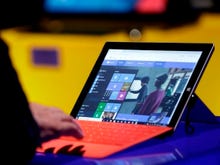 The biggest tech stories of 2015

A look back at the hot topics, major deals, and the tech breakthroughs of the year.

And it's truly a shame, because the new Apple TV isn't so bad overall, and has a vast and almost limitless potential.

The new set-top box is a cordcutter's dream. Previous iterations of the box came with a thin, sleek, silver remote with physical buttons. It was hard to go wrong with it, though it was laborious at times entering search terms, entering in each letter one after the other. The third-generation box and earlier didn't come with apps, but new streaming services were added periodically after negotiations between Apple and digital content providers would prove fruitful.

It was one of the few Apple devices that "just worked," and required almost no effort to keep it ticking over.

Then, it graduated from the "hobby" section section of the company's product line, and went on with the tools and features to turn the set-top box into an app platform that developers could add to, build on, and provide content through -- all while making Apple millions of dollars in the process. The idea of having apps and games on your living room TV display would put the box far above and beyond its competitors.

For $150 for the cheapest model, the box would serve as an ultimate, voice-activated content hub, helped along by the inclusion of the voice assistant, Siri.

For all the good that the new box offers, it's biggest let down is the remote, which you use to make the box do anything and everything. And there's no alternative -- you're stuck using it, whether you like it or not.

Most of the issues revolve around the touch-based trackpad at the top of the remote -- when you can find it. The trackpad area is a small matte black square at the top of the remote, but in a darker room it looks almost indistinguishable from the rest of the stick. The remote looks almost identical top to bottom (something my colleague David Gewirtz agrees with) making it almost impossible at first glance to know which way is up, which can lead to accidental swipes and button pushes.

The remote's trackpad is in theory a novel idea, bringing a touch-screen element to the set-top box. When you use the remote for the first time, you'll quickly figure out why it was designed that way.

How you enter text, search queries, or your login details has changed -- and not for the better.

The new horizontal line of letters makes entering text excruciatingly slow, with no significant benefit from the old grid-based system of letters. The only benefit to the new remote is that it's slightly faster to swipe from one letter to the other than it is to repeatedly hit one of the navigation buttons on the old remote. And each time you want to start watching from a new app or streaming service, you have to battle with the remote just to enter your login details.

When the trackpad works, it works well. But when it arbitrarily decides to run with a mind of its own, it's either under-responsive and difficult to use, or it's too hyperactive and overly-sensitive.

So sensitive, in fact, that the remote can't distinguish between a user's finger push, and a cat's paw -- something I figured out the hard way.

Fewer things are scarier than waking up in the night to the sound of voices in your apartment. A few weeks ago, I heard a muffled voice or two -- and then, out of nowhere -- a loud bellow of shouting, and what sounded like someone being repeatedly stabbed. Horrified, and scared witless, I bolted out of bed and sprung open the bedroom door, only to discover that the debut season finale of "Dexter" was blasting out from the TV because one of our cats sat on the Apple TV remote, which began to play one particular scene in which the sociopathic protagonist brutally murders someone.

It wasn't easy falling back to sleep after that.

A lot of things drove me to the brink and back last year -- everything from my iPhone's auto-correct, spam filters, smart bulbs that bust after the first five minutes, a leaking dishwasher, and my home wireless router, which all too often overheats and needs unplugging for five minutes daily -- but nothing was quite as unrelenting or anger-inducing than that redesigned remote control.

The good news is that some weeks later, Apple updated its iPhone remote app, which added support for fourth-generation devices. It was a saving grace that made the box usable again.

The old remote was clunky and cold, and navigation was slow and cumbersome, but it worked with a near-perfect track record. Somewhere along the line, a decision was made to improve something that didn't really need it.