Phones and tablets have become an irreplaceable part of our workday, allowing us to remotely edit spreadsheets, monitor inventory, communicate with each other, or manage fleets. But most phones and tablets aren't made to withstand tough environments like construction sites -- or just frequent drops.

There are, however, a subset of tablets that are built to withstand the most abuse (because let's face it, nothing is indestructible). They're often a pricey investment, but thanks to their tough exteriors, they'll prevent you from spending more money getting devices repaired or replaced.

The tablets below are built to power through whatever wear and tear you can throw at them. 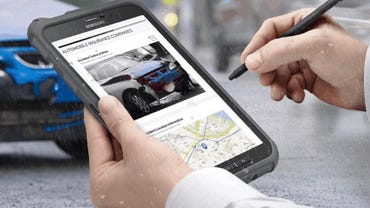 The Galaxy Tab Active 3 is a smaller version of the Tab Active Pro. It's equipped with an 8-inch display, MIL-STD 810H certification, IP68 rating for dust and water. That means you can drop it from up to 1.5m or leave it in water for up to 30 minutes, and it should survive without any issues.

There are two models. Both the 64GB storage and 128GB model come with 4GB of memory and a 5,050mAh battery. The battery can be swapped out, making it easy to change batteries if you start to run low. You can even run the Active 3 without a battery as long as it's connected to a dedicated power source.

Android 10 is installed out of the box, and it comes with Samsung's DeX platform that converts the tablet interface into a laptop-like experience. Because it's running Android, you'll be able to get all of the apps and services you usually get from the Play Store.

A powerful Android tablet from Panasonic 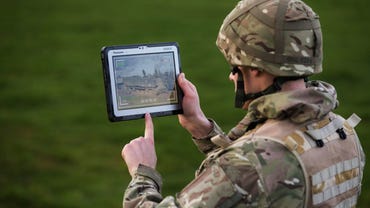 The Toughbook A3 launched in early 2020 and still looks like a viable rugged tablet. It has a 10.1-inch display, giving you more room to get work done in the field when compared to something like the Tab Active 3.

It boasts 4GB of memory, 64GB of storage, with microSD card support up to 64GB, and dedicated modes when it senses rain or the user is wearing gloves (a common feature for most ruggedized tablets).

It's IP65 certified for water and dust resistance and has a battery life of 9 hours. You can hot-swap the battery packs, however, meaning you don't have to wait for the tablet to power down and then back up when you need to change batteries.

Pricing starts at $2,699, and you'll need to go through Panasonic's sales partners to pick one up. 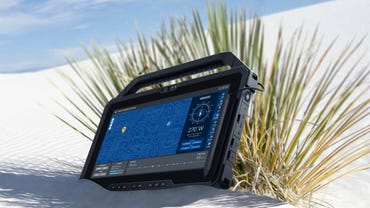 The Latitude 7220 is dubbed a Rugged Extreme Tablet by Dell, and it has the specs to back it up. It comes with Windows 10 Pro pre-installed and has enough ports that make modern laptops jealous. Its design exudes a rugged exterior.

The 7220 has a display that measures 11.6 inches, up to 16GB of memory, up to 256GB of storage, and is equipped with an Intel Core i3 processor. In addition to the touchscreen, there are several physical buttons along the bottom of the housing to navigate Windows 10.

Pretty much every aspect of the tablet can be customized during the building process of the purchase. For instance, you can opt to put an Intel Core i7 in it, should you need the extra power. You can also add an optional keyboard, extra battery packs, or pick between AT&T, Verizon, or Sprint for mobile connectivity. 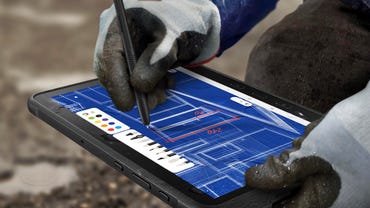 Samsung's biggest ruggedized tablet runs Android 9, providing a similar experience to the company's smartphones. The 10.1-inch display works with the S Pen stylus, making it possible to jot and write down notes on the display. You get 64GB of storage, 4GB of memory, and a 7,600mAh battery. There's a 13-megapixel rear-facing camera and an 8-megapixel front-facing camera. You can add up to 512GB of storage via a microSD card.

This rugged tablet is ideal for someone who needs the added protection but also prefers Samsung's ecosystem of apps, devices, and services.

Rugged Windows tablet that can take a severe beating 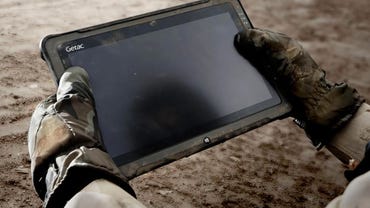 The Getac F110 is a rugged Windows tablet that can take a severe beating. It's MIL STD 810H & IP66 certified, so it'll withstand virtually whatever you throw at it. You can get it with Windows 10 Pro, powered by 11th generation Intel processors, 8GB of memory, and SSD storage ranging from 256GB, 512GB up to 1TB.

There's a 1080p 11.6-inch touchscreen display, a Windows Hello camera system for face authentication, and a myriad of ports and connection options for accessories and scanners.

Getac also has the F110 C1D2, a version of this same tablet that is approved for work in a biohazardous environment. You can find that particular model here.

Wouldn't a case do just as good of a job to make a tablet rugged?

Yes and no. Some of the higher-end cases, like those from Otterbox, are certainly designed to protect your tablet. But there are some aspects of a rugged tablet it can't reproduce. For example, some of the tablets in this roundup are designed to withstand severe temperatures in addition to being tougher to break when dropped.

What tablet does the military use?

The United States Army has used the Getac F110, featured here on our list, in the past for field work like civil engineering, command planning, and tracking both personnel and vehicles. If the Army thinks it's tough enough to handle the extreme conditions they sometimes face, the Getac F110 can definitely handle construction sites and rowdy toddlers.

What does "military grade" mean?

If a device is advertised as being "military grade," that doesn't necessarily mean it was developed for military use, but rather rigorously tested against MIL-STD 810 standards. This testing process runs devices through all kinds of very extreme conditions to simulate what soldiers may encounter during deployment or combat. The standards compare device performance in situations where it may be violently dropped, thrown, or even exploded as well as how devices hold up in heavy rain, high and low temperatures, coming into contact with chemicals, and how well they resist dust and even fungus infiltration. Most commercially available "military grade" devices are tested for drops, shocks, and water resistance.

Does Apple make a rugged tablet?

At the time of writing, Apple does not make a ruggedized version of any of their iPad models. However, you can buy a range of ruggedized cases like the Otterbox Defender or aXtion Bold to protect your device from drops, shocks, and to resist water.

How did we choose these rugged tablets?

I've been testing tablets since the first iPad launched, and I've used a large number of tablets over the years. Using personal experience with tablets and reviews across the internet from users and pros alike, I was able to narrow down this list of rugged tablets.

Which rugged tablet is right for you?

Start by asking yourself which operating system you want or need. You basically have two choices: Android or Windows 10. Based on that answer, you've narrowed down the selection process quite a bit. From there, look at the finer details of each tablet. Can you customize the build? What kind of accessories are available? What do you need the tablet to do? 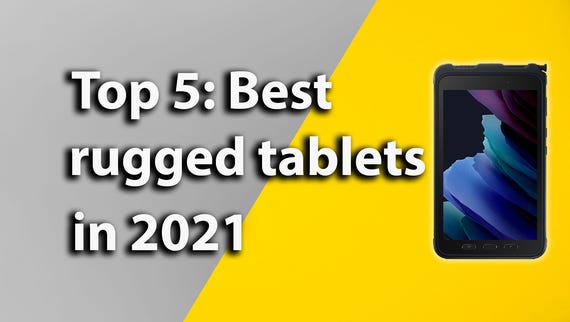 Join Discussion for: Best rugged tablets 2022: For the toughest...