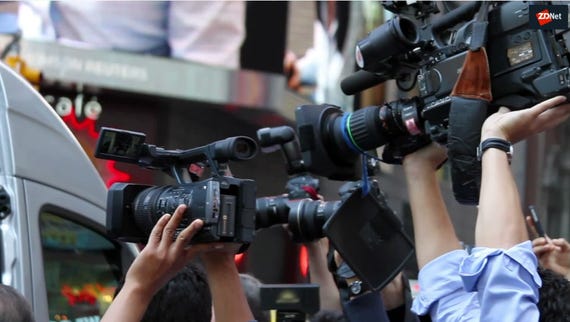 A year after photojournalists and filmmakers sent a critical letter to camera makers for failing to add a basic security feature to protect their work from searches and hacking, little progress has been made.

The letter, sent in late-2016, called on camera makers to build encryption into their cameras after photojournalists said they face "a variety of threats from border security guards, local police, intelligence agents, terrorists, and criminals when attempting to safely return their footage so that it can be edited and published," according to the Freedom of the Press Foundation, which published the letter.

The threat against photojournalists remains high. The foundation's US Press Freedom Tracker tallied more than 125 incidents against reporters last year, including the smashing of reporters' cameras and the "bodyslam" incident.

Even when they're out in the field, collecting footage and documenting evidence, reporters have long argued that without encryption, police, the military, and border agents in countries where they work can examine and search their devices.

"The consequences can be dire," the letter added.

Although iPhones and Android phones, computers, and instant messengers all come with encryption, camera makers have fallen behind. Not only does encryption protect reported work from prying eyes, it also protects sources -- many of whom put their lives at risk to expose corruption or wrongdoing. The lack of encryption means high-end camera makers are forcing their customers to choose between putting their sources at risk, or relying on encrypted, but less-capable devices, like iPhones.

We asked the same camera manufacturers if they plan to add encryption to their cameras -- and if not, why.

The short answer: don't expect much any time soon.

An Olympus spokesperson said the company will "in the next year... continue to review the request to implement encryption technology in our photographic and video products and will develop a plan for implementation where applicable in consideration to the Olympus product roadmap and the market requirements."

When reached, Canon said it was "not at liberty to comment on future products and/or innovation."

A Nikon spokesperson said the company is "constantly listening to the needs of an evolving market and considering photographer feedback, and we will continue to evaluate product features to best suit the needs of our users."

And Fuji did not respond to several requests for comment by phone and email prior to publication.

Trevor Timm, executive director of the Freedom of the Press Foundation, told ZDNet that it's "extremely disappointing the major camera manufacturers haven't even committed to investing resources into more research into this issue, let alone actually building solutions into their cameras."

"Dozens of the world's best filmmakers made clear a year ago that camera companies -- in today's world -- have an obligation to build in a way for everyone to encrypt their files and footage to potentially help keep them safe," he added.

"I hope the camera companies eventually listen to some of their most important and at-risk customers," he said.