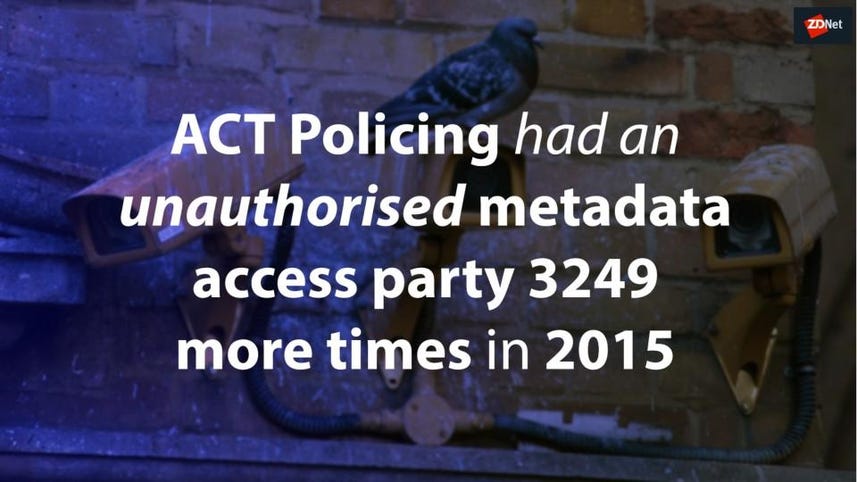 ACT Policing has confessed that it found 3,249 extra times it accessed metadata without proper authorisation during 2015, on top of the 116 requests disclosed earlier this year.

In a statement released on Friday afternoon, ACT Policing said it found extra requests during 2018.

"Once the issue was discovered, ACT Policing notified the Ombudsman's Office to seek advice on how to remedy this administrative oversight," it said.

From the extra requests, 240 were forwarded to case officers, which had landed ACT Policing in legal hot water.

"ACT Policing has sought legal advice regarding the management of two matters relating to a missing persons case and a criminal matter where the data in question may have been used in a prosecution," it said.

"The Ombudsman's Office has been kept informed throughout the examination and quarantining process. It is not appropriate to identify particular cases."

The Ombudsman report from February found the concerned authorisations for metadata were not authorised, due to the AFP Commissioner failing to authorise any ACT officers for that period.

"In response to this disclosure, our Office suggested the AFP quarantine all telecommunications data obtained under the 116 authorisations made by the unauthorised ACT Policing officer between 13–26 October 2015 from further use and communication," the report from the start of the year said.

"Following the inspection, the AFP accepted this suggestion; however it did not act to quarantine the affected data at that time, which resulted in additional use and communication of the data."

In February 2018, the data was partially quarantined only after being prodded by the Ombudsman.

"There are mechanisms in place, safe checks, and they should be adhered to, and if not, there are consequences for that," he said.

"Take the protections very seriously. But in the end, the vast majority of cases, 99% of the use of these laws will be appropriate, and they'll be used in a way that that will result in protecting Australians -- and that's the reality."

The only consequences identified by ACT Policing on Friday was "refresher training" for officers.

In November 2017, a Commonwealth Ombudsman report into how the Australian Federal Police managed to trip over the one caveat in Australia's metadata retention system -- needing a warrant to access the metadata of a journalist when attempting to identify a source -- found AFP officers did not "fully appreciate their responsibilities" when using metadata powers.

The one recommendation from the report called on the AFP to make all staff that used metadata powers undergo training to have a "thorough understanding" of the laws and their responsibilities.

On Wednesday, Dutton skirted any responsibility the federal police might have for the metadata access without authorisation in the ACT.

"That's a contracted arrangement between the AFP and the ACT government, and we don't direct those officers, they operate under ACT law and under the commission of the ACT."

Almost 40% of those aged over 55, as well as Coalition voters, are not concerned by the introduction of Australia's encryption laws, according to Digital Rights Watch.

Minister for Home Affairs also takes opportunity to try to scare the population.

Agencies that are allowed to view metadata should be spelled out in legislation, Law Council of Australia states.

Agencies are very happy with Australia's data retention scheme, with one using it in 90% of investigations.

The Communications Alliance has listed 27 other agencies that have tried to access metadata following the introduction of Australia's data retention regime.

Law enforcement agencies have stumped up only AU$39 million to poke around in Australia's metadata.