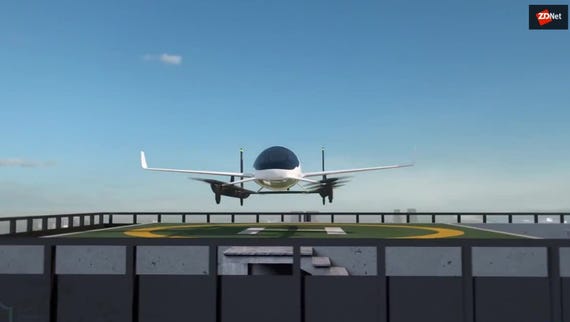 Airbus is targeting 2020 as the year its Vahana air taxi will be a viable product, and before that time, it is hoping for a step change in computing power.

According to Arne Stoschek, head of autonomous systems at Airbus A3, the computing challenge is a result of the operating environment the vehicle will face. Compared to the autonomous cars, Vahana will face many of the same issues at or near the ground, but it is when cruising altitude is reached that unique problems appear.

Stoschek told participants at Nvidia GTC that Vahana will travel around 230 kilometres per hour in a 3D space with airborne obstacles and with an inability to apply the brakes in a familiar fashion.

"If we have an obstacle 500 metres away ... that's 10 seconds to impact. If we have something that is [approaching] with our own speed, closing speed of 100 metres per second, then we have five seconds to impact, which is not a lot of time," he said.

"So we need to be both very accurate, and very fast."

The computing systems will be pouring over high-resolution images from radar, lidar, and cameras to provide a sphere of coverage for the vehicle. Stoschek said single images need to be in the order of 4000x3000 pixels to allow for detection of far away objects, and when stitched together, start to push the memory of embedded devices.

To handle the sheer amount of data, Airbus will need an order of magnitude increase in CPU performance, memory, power usage, as well as improvements in software and hardware, but Stoschek said Vahana will still be ready in 2020.

Another obstacle in Vahana's path that silicon will not be able to solve is regulation, with Stoschek calling for an overhaul that would allow air taxis to be used with efficiency.

"We have a set of rules for cars that allows cars to be operated basically bumper-to-bumper, so you can pack a ton of cars [in]," he said.

"Currently in aerospace it is very, very different ... you need to have what is called a separation distance, [such that] you could operate one aircraft over the entire city of San Francisco.

"So obviously in aerospace we need a new system of rules that allows us to pack a lot of aircraft into the sky."

In January, Airbus said it would test Vahana during 2017, and has so far tested models of the autonomous electric vehicle.

"I'm no big fan of Star Wars, but it's not crazy to imagine that one day our big cities will have flying cars making their way along roads in the sky," Airbus CEO Tom Enders said in August 2016. "In a not too distant future, we'll use our smartphones to book a fully automated flying taxi that will land outside our front door -- without any pilot."

Vahana is set have a range of 100 kilometres, take up approximately two car park spots, and carry a pair of passengers.

Disclosure: Chris Duckett travelled to GTC as a guest of Nvidia.