Apple have done it again. They've made an operating system that knocks the spots off the competition.
Written by Jake Rayson Rayson, Contributor on July 20, 2011

Apple have done it again. They've made an operating system that knocks the spots off the competition. This time it's iOS vs Android rather than Mac vs Windows.

Neil, the resident crayon at the studios, has an iPhone. He isn't shy about using it in front of Android owners like myself. Upon closer inspection of the shiny shiny thing, I noticed two key bits of functionality that I really wanted.

1. Apps organised by folder. Can you believe the default Android 2.3 app screen just lists them, on and scrolling on. It takes an age to drag 'em about the place into some semblance of order. 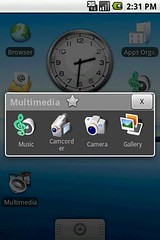 Enter Apps Organiser by Fabio Collini. It organises apps, not surprisingly. You create and add labels to apps, and then you can place the labels onto your home page by long-click and Add to home. Nice. Very nice. And free. My main home screen now has 9 labels in neat and exquisitely tidy rows.

2. Desktops that can take widgets & shortcuts that lock. With my big fat fingers, I kept knocking into shortcuts and generally trashing them. I couldn't find a way to lock the desktop. I also found the default split between shortcut screens and widget screens annoying.

All hail ADW Launcher by AnderWeb. Uber magnificent. And free. And Free. It does all of the above. And there's an Ubuntu theme. I like it a lot.

Now all I have to do is work out how to hangup a phone call....