Full Bio
Posted in Between the Lines on October 4, 2011 | Topic: Apple

Apple CEO Tim Cook's first product launch performance started with a quip as he called the gig a "privilege of a lifetime" and delivered a homey feeling by inviting reporters to headquarters and a town hall rich with history.

But there wasn't a "one more thing" at the end of the talk as Cook era officially began. Where Steve Jobs commanded the stage in his glory keynotes, Cook used Apple's most recent playbook: The CEO recaps success, introduces the team and then let's the products do the talking.

Cook ended his talk by noting that Apple was a team. "I am so incredibly proud of this company and all of the teams that work so hard to bring the innovations to reality," said Cook. 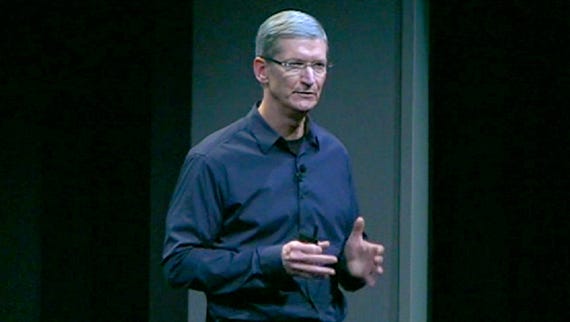 Overall, Cook did what he had to: Roll out products that will keep Apple dominant. Indeed, the iPhone 4S with its voice features, pricing and faster chip will do enough to keep an upgrade cycle humming. The overall theme is that Apple has continuity and that this is Cook's company now.

ZDNet's James Kendrick noted the end of the Jobs era:

The big Apple iPhone event went down in a lower key than usual, with new iPhones announced and Tim Cook taking over as Apple’s public front man. The presentation, which by all accounts was rather low-key, went off without a hitch as Cook ushered in both the next iPhone and a new era at Apple.

While the new iPhone line will surely set new sales records, the event was clearly the end of the era of exciting product launches at Apple.

Is that so bad? Cook has historically stayed in the background as the supply chain genius and the one person in Apple that frequently mentions the enterprise. He even got in a line about Fortune 500 companies implementing the iPhone. Jobs tolerated a little enterprise focus, but that's only because he looked the other way.

Some critics may determine that Cook's lack of time on stage was a miscalculation. I'd go the opposite way. Plenty of strong CEOs have preferred to work in the background. For instance, you may catch IBM CEO Sam Palmisano once a year in a public forum or earnings conference call. Palmisano is at home on stage, but also seems well aware about the overexposure issue.

I'd argue there's an inverse relationship between company market cap and the time a CEO spends yapping to the masses. In other words, I don't need a CEO out front all the time. Stick with meeting customers and doing strategic things.

On scene at Apple's event, CNET News' Josh Lowensohn relayed is first take to me:

Cook was out of the spotlight for most of the presentation. SVP lieutenants (Scott) Forstall and (Phil) Schiller carried the show. That's kind of a letdown for people hoping to see Cook strike out on his own as the company's leader. Schiller is just fine talking up features, but he's a marketing guy. Somehow it seems more genuine coming from the CEO. 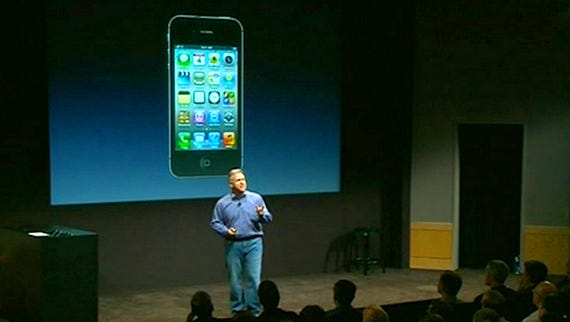 In the end, Cook may need some more stage prep, but will do just fine. You could do worse with a first product launch performance. Cook talked ecosystem, team and how all the moving parts of Apple work together. As noted previously, the Cook era doesn't officially begin until he owns the product roadmap in a few years. Cook had a good first outing and given the CEO turmoil in the technology industry---just ask HP---it's clear that Apple has had a winning handoff in the corner office.