Ahead of the iOS 7 launch later this year, likely in line with a new iPhone release, Apple is touting a bevy of new software features designed with business users in mind.

It's not just about the back-end mobile management features, and Apple knows it. The functionality to the end-user also counts. iOS 7 now includes a range of user experience enhancements as the technology giant continues to compete with already-established and well-developed rival platforms and vie for the hearts of enterprise users.

In recent years, enterprise and business users are increasingly picking up Apple products, despite the company focusing more on the consumer market. And now for the first time, bring-your-own-device (BYOD) users are also recognized, keeping Apple up-to-date with the current business trends. 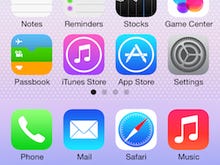 Apple's iOS 7 hands-on, in pictures (gallery) The iPhone and iPad maker on Monday announced iOS 7, its latest mobile operating system. ZDNet takes it for a test drive and shows you the new user interface and some of the new features.

Here's a quick run down:

Managed open in: iOS 7's bid to protect corporate data will control which apps and accounts open certain documents and attachments. IT policies can set the configuration list, forcing corporate data to be opened in corporate apps.

Per app VPN: Apps requiring virtual private networking (VPN) functionality to run when they start up. Granular controls allow for business data to flow over corporate networking pipes, while personal browsing data does not. This will especially be of interest to bring-your-own-device (BYOD) employees who work from home or remote locations.

New mobile device management (MDM) configuration: One for IT administrators. A new MDM protocol is included with iOS 7 in order to streamline third-party MDM solutions. Corporate-owned devices can be automatically enrolled in an MDM solution during activation, automating much of the custom commands, fonts and wirelessly set-up managed apps.

Improved Mail: Finally, PDF support in the email application, as well as support for Exchange 2010.

Enterprise single sign-on (SSO): Authenticating will be far easier in iOS 7, allowing users to take their corporate credentials across apps, including apps from the App Store. It reduces the need to remember a bunch of passwords, but also keeps data secure by cutting out the password manager middle-man.

Third-party app data protection: All third-party apps will now have a "data protection mode" enabled, so data stored in those apps are protected with a user's passcode — which a strong and unique encryption key is generated from — until their device is unlocked after each reboot.

It's clear that while businesses picked Apple, the technology giant is now embracing its enterprise following. By offering these server-side and front-facing changes, it broadens the audience Apple actively targets.

While some argue that consumers are suffering from "iPhone fatigue," the business market runs at a slower pace. With Samsung and BlackBerry offering two mobile device management services ( Knox and BES respectively), Apple is trying to keep ahead of the game by working with its already established base of users, with the aim of keeping them from defecting to a rival platform.