Apple's iPad 2: An incremental upgrade enough to kill the competition

Apple CEO Steve Jobs unveiled the iPad 2 and boxed in the competition for potentially the next two product cycles.
Written by Larry Dignan on March 2, 2011

Apple CEO Steve Jobs unveiled the iPad 2 on Wednesday and the festivities went about as expected. The iPad got two cameras, dropped some girth and introduced some snazzy new covers.

Missing from the equation was a USB port and a new display.

But when you add up all the moving parts, Jobs had every right to be cocky and kick around the competition, notably Android, Samsung, Motorola and RIM. Sure, you could argue that Jobs lowered himself by calling out rivals by name, but the message was received: Apple just ensured that the other tablets are dead on arrival.

Simply put, iPad 2 may be more 1.5 to some folks, but it's more than enough to put the rivals to rest. Why? Most tablets---all preannounced by the way---aren't going to hit the market before the iPad 2 launches. The iPad 2 will hit the U.S. market March 11 and global markets March 26. The iPad 2 "will be everywhere," said Jobs.

That fact means it's going to be very hard for rivals to come close to competing with Apple. The Art of War goes like this:

As my colleague Jason Perlow noted: The competition is "mega screwed."

Motorola Xoom: Jobs made a point to note that Apple only had one model over $799. That quip could have been directly addressed to Motorola Mobility CEO Sanjay Jha. The big bet for Motorola is that 4G---something lacking on the iPad---will be enough to woo business users. On the floors of Best Buy, iPad 2 is likely to win the day hands down. The Xoom will have to come down in price quickly. The Xoom has its merits, but it will be tough to unseat Apple.

Samsung and the Android army: These Honeycomb Android tablets will have their merits, but they will have to compete on price. The commoditization of Android tablets will be fast and furious. It's unlikely that Samsung or others can win that game with Apple owning the supply chain. Research in Motion: If Apple didn't announce the iPad 2, there would be significant questions about RIM's PlayBook. As Perlow noted, battery life, thermal management, the software and email tethering are all question marks. And oh yeah, RIM doesn't have a price tag either. Advantage Apple.

Hewlett-Packard: HP showed off its WebOS tablet and got into the game. The problem is that we don't know when HP's tablet is coming or the price. Toss in the fact that the app situation is unclear and you have no reason to pause a purchase to see what HP cooks up.

Bottom line: Apple just forced the hand of tablet rivals. Jobs bravado looks justified. The year of the iPad will be 2011 too. 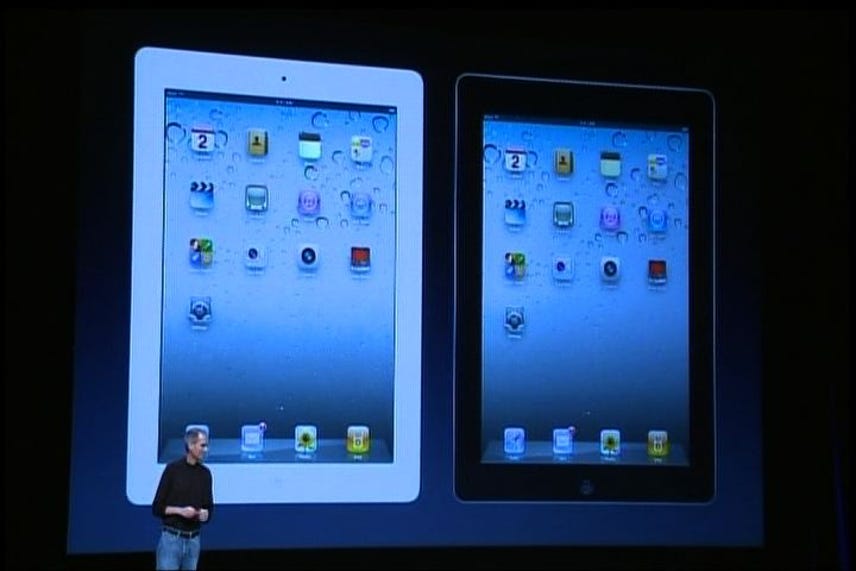