Apple on Monday posted its full testimony to Congress ahead of a U.S. Senate hearing, in which the company's chief executive will speak to lawmakers. 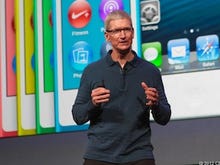 Apple to Congress: We do not use 'tax gimmicks'

Ahead of a Congressional hearing on Tuesday, the iPhone and iPad maker sets out Apple chief executive Tim Cook's testimony. The company is clear: "what you see is what you get," but will Congress buy it?

The U.S. Senate Permanent Subcommittee on Investigation is looking into a number of tax avoidance schemes and strategies by major technology firms.

While Apple took the opportunity to defend its position, taking the high ground over other firms that have abused the tax system  at home and abroad, the iPhone and iPad maker stressed one key point: It pays U.S. tax, and if Congress doesn't believe it is paying enough, then lawmakers should change the tax rules.

Included in the testimony are a bevy of numbers that shed light on the company's activities not only in the U.S., but also abroad. Apple says that more than half — nearly two-thirds — of all its revenue comes from international sales.

Here are the numbers we extracted from the testimony:

Join Discussion for: Apple's tax testimony ahead of Senate hearing:...