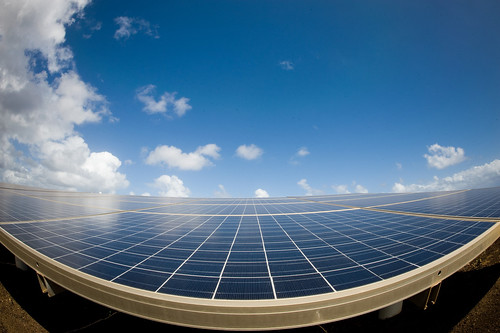 Yesterday the Bureau of Land Management (BLM) released its rental rates for companies wishing to use federal lands to to generate solar energy.

Today, we are providing the solar energy industry the level of certainty it needs about the costs associated with projects on the public lands and ensuring a fair return to American taxpayers for the use of their public lands.

The rates differ according to location, county property values, the number of megawatts produced at the facility, the use of storage systems to provide energy during low sunlight times, and the type of technology being used—photovoltaic panels, concentrated solar, solar-thermal hybrids, etc.

In some cases, the rates are much higher than market rates on private land. The technology's overall efficiency energy-wise also doesn't factor into the rental costs. For instance, a solar-thermal plant might generate the same electric output on less land than other solar types, but they need larger amounts of water to operate. In deserts and other water-strapped areas, this adds to the plant's impact on the land's resources.

That methodology is a work in progress as the agency tries to adapt decades-old formulas designed for oil and gas leasing and mineral extraction to renewable energy production.

Some 23 million acres of federal property are suitable for large-scale solar development, according to the bureau, and the agency has received more than 200 lease applications from developers who covet hot and sunny desert real estate in the Southwest.

More rates can be found here.

According to the BLM, federal and state governments received $5.5 billion in 2008 for federal onshore energy leasing and production.

Join Discussion for: Are the fed's fees for solar on public land...