Go ahead and livestream that football game to your Facebook followers.

You can even Snapchat, Instagram, and FaceTime during an entire concert -- all without stressing about spotty cell phone reception. AT&T plans to use drones to provide better wireless service to its customers at crowded venues.

While the lines for bathroom at these events are long, the invisible queue for wireless service is also crowded. The current LTE infrastructure simply can't keep up when too many users get together in a small area.

AT&T and Intel previously announced a partnership to study how LTE networks could work on drones. Now, in a blog post on Wednesday, AT&T wrote about the launch of a trial phase for a national drone program. 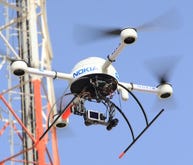 Part of the program includes tethered drones with the unfortunate nickname Flying COWS (Cell on Wings) that will provide wireless service at crowded venues such as sporting events and concerts.

According to the post, the drones will be "temporarily providing enhanced LTE wireless coverage at the packed venue so you, along with thousands of others in attendance, can simultaneously send photos and videos to share the moment".

Compared to traditional inspection techniques, the drones are faster and safer, and they can reach places that humans can't. Beyond boosting coverage for customers, LTE drones could be used to deliver wireless service to remote areas or provide communications during disaster-relief efforts.

AT&T certainly isn't the first company to consider this concept. Google's Project Loon and Facebook's internet.org are similar initiatives, but it will be interesting to see how a wireless carrier's approach could differ.