The new model features a type of driving assistance technology that offers 'unprecedented' levels of autonomy on crowded highways.
Written by Jonathan Chadwick, Contributor on July 13, 2017 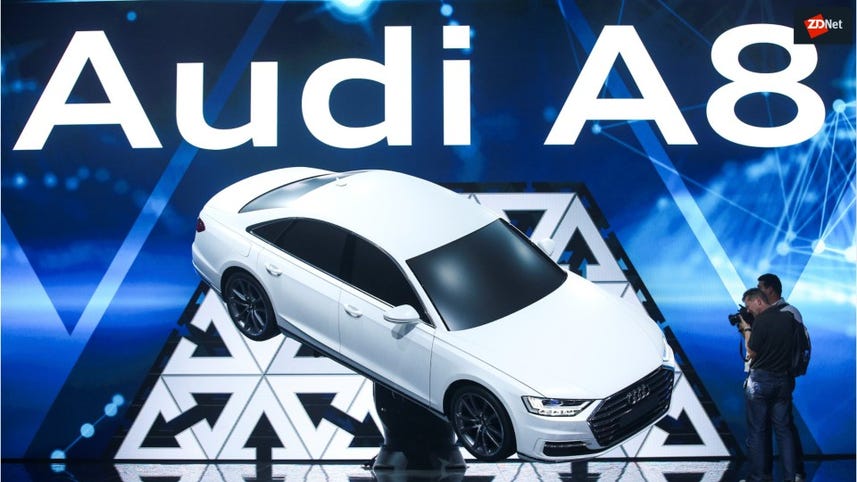 Audi has unveiled its Nvidia-powered level 3 autonomous vehicle, the A8 2018, at the Audi Summit in Barcelona this week.

The new A8's main feature is The Audi AI Traffic Jam Pilot, a driver assistance technology the car giant said is optimised for use in traffic jams.

Powered by Audi's "Zfas" CPU -- and touted by Audi as a world first -- the traffic jam pilot uses cameras and a laser scanner to sense the area in front of the car for autonomous driving. Data from the sensors is processed at 2.5 billion inputs per second to create a "precise environment model".

The feature, which is activated through a single button on the centre console, also gives visual and audio prompts to the driver to take back control of the vehicle once traffic dissipates.

It can be utilised at speeds of up to 60kph on roads where the system is enabled, using sensors and the car's navigation system.

The A8 also includes an Nvidia-powered MIB+ infotainment system and interfaces that create a "virtual cockpit". The car will arrive in the US next year.

"The car of the future will make its occupants' lives easier with the help of artificial intelligence," said Audi chairman of the board Rupert Stadler.

"Audi is applying digital technologies throughout its business operations -- from production and logistics to sales and marketing to unleash new possibilities," the company added.

Audi announced its partnership with Nvidia earlier this year with the aim to bring level 4 autonomy to the roads by 2020.

According to the Department of Transport (DOT), level 4 vehicles are "designed to perform all safety-critical driving functions and monitor roadway conditions for an entire trip".

Level 4 vehicles are unable to cover every driving scenario, however, such as dirt roads.

Audi also announced that it is working with German automotive supplier ZF on the ProAI self-driving system, which will use input from cameras, lidar, radar, and ultrasonic sensors for vehicles to navigate their surroundings.

Nvidia has also teamed up with Here, Baidu, TomTom, and Zenrin for mapping services.