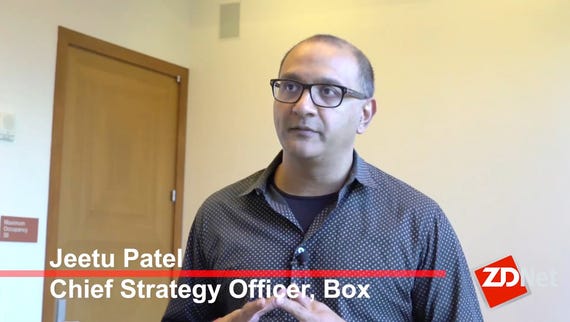 Video: Why companies are racing to turn their products into platforms

Box on Thursday begins rolling out a set of new tools for the Box Platform that should make it easier for businesses to incorporate a Box-style content management experience into their own applications.

The new tools, called Box Elements, are pre-built, customizable components -- some of the same components used to build Box's core app. The Box app has around 54 million users and 74,000 customers. The Box Platform is a separate line of business, which offers APIs for customers creating their own applications.

"People should not have to rebuild content management infrastructure every time they want to use content in an app, they should just go out and use us," Jeetu Patel, chief strategy officer and head of Box Platform, said to ZDNet.

Box has spent the past decade thinking about how to build content management tools with security, governance, and compliance capabilities built in, as well as a sleek and engaging user experience, Patel said. Box Elements, he said, provides that expertise in a simple package for other businesses to adopt.

There are three categories of Box Elements. The first, a series of UI elements, is generally available Thursday. Each UI element can be used on its own, or they can be strung together:

Later, Box will roll out the two other categories: backend service elements, as well as industry-specific app elements.

The backend service elements could be thought of as microservices, Patel explained -- discrete actions that happen on a repeated basis, such as provisioning users. Meanwhile, the industry-specific app elements could serve, for example, the financial services sector -- Box can provide code for a secure content vault, enabling a financial services firm to build their own secure investor portal.

Box Elements will be open source, and the code for Box Content Preview is now available on Github.

The new tools were built after Box saw developers on the Box Platform following the same patterns. The Box Platform now has more than 100,000 developers as part of its community, including developers from a range of companies like GE, Schneider Electric, Slack, and LegalZoom.

Box envisions a future, potentially five to seven years down the road, where effectively all consumers could be using Box, with a third using the core app and the rest using applications running on the Box Platform.

"The remaining 66 percent... are still using Box, they just don't know it," Patel explained. "Every time they go to their financial services portal or a website for their automaker, all of those people are serving up content using Box in the background."

Meanwhile, the core Box app and the Box Platform create a "virtuous cycle" of business, Patel said. "We have a unique advantage that a platform-only company or an app company doesn't have," he said.

"When people use Box, they want to do things to customize it, integrate it into other things and extend its capabilities into custom apps," he said. Meanwhile, customers who start out using Box Platform "say, 'Wow, you've got this great user experience and system, maybe I should also enable my team internally to use Box.'"

Join Discussion for: Box rolls out pre-built components for Box...