Dish Network trotted out its new "Hopper" and "Joey" DVR systems that nearly eliminate recording conflicts while offering up thousands of hours of more on-demand content via broadband.
Written by Rachel King, Contributor on Jan. 9, 2012 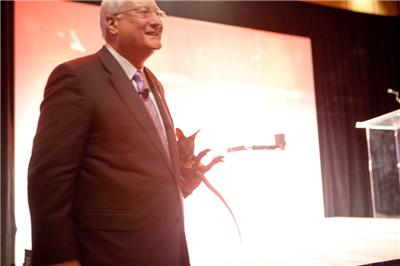 LAS VEGAS -- Dish Network is revamping itself from the ground up in 2012 with a completely new DVR platform, thousands of hours of more content thanks to a handful of new partnerships, and even a new family-friendly mascot.

(Yes, that is a real baby kangaroo in the photo with Dish CEO Joe Clayton.)

"We are basically relaunching our company," said Clayton during Dish's press conference on Monday afternoon.

After the new Hopper and Joey DVR system, which effectively cuts down DVR scheduling and viewing conflicts to almost nil, the most innovative new solution would be Dish Broadband.

Dish's new Broadband offering, founded in partnership with ViaSat, is touted as different because it is supposed to be able to bring broadband connectivity to more than 8 million rural American households that lack access to anything better than DSL connectivity. That pool is expected to grow this summer when Dish's partner, Hughes Echostar, launches its own program in conjunction with Dish Broadband.

Most major cable and satellite TV providers have recognized the demand for combining these services into single plans, but many of those offerings tend to neglect rural consumers who don't have access to the technology required.

Dish has the potential to be a carrier of its own here as it has both the spectrum and the satellite dishes needed to support this demographic.

However, we'll know soon enough how well Dish can handle providing this broadband network (especially at those upload and download rates) to trickier areas.

Expected to launch in February, retail prices start at $79.98 per month for bundles of broadband and pay TV on a single bill with a single installation appointment.

Get a smart TV to stream the big game: Our favorite picks

Optus & Cisco - Disrupting the Australian marketplace together for 30 years to build new ways of working for their customers.