If you're Intel, you need to keep the PC ecosystem moving: new concepts and fresh designs capture users' imaginations and get them buying new hardware. But Intel doesn't make PCs, and isn't in a position to dictate hardware form factors to a myriad OEMs.
Written by First Take , Previews blog log-in on Jan. 11, 2012

If you're Intel, you need to keep the PC ecosystem moving: new concepts and fresh designs capture users' imaginations and get them buying new hardware. But Intel doesn't make PCs, and isn't in a position to dictate hardware form factors to a myriad OEMs. So it does the one thing that makes sense — it designs and builds concept devices to inspire and encourage its partners to try something new — and to build a buzz around new ways of computing.

One concept design that Intel has been touting for a while is codenamed Nikiski, and it got a lot of attention at Intel's CES 2012 press conference. Designed to give you more information about your life when the screen is closed, Nikiski replaces the trackpad and wrist wrest with a clear glass section. Close the laptop, and you can see right through to the screen.

As wide as the system, and about a quarter to a third of its depth, the glass section doubles as a high-resolution full-width trackpad, and one that can be viewed and used from both sides. There's full blunt touch rejection, so you can carry on using it as a wrist wrest. With the laptop closed it becomes a touch-screen layer. The prototype demonstrated at CES ran a Metro-like notification application, with live tiles, when closed — taking advantage of new hardware that only illuminates the visible pixels. Although it looked like Windows 8, with brightly coloured tiles, it was actually a Windows 7 application. 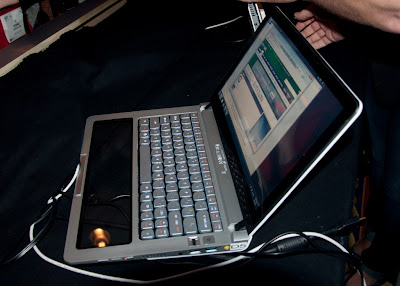 It's only demonstration software, but it gives a feel for what can be done with Nikiski, bringing the always-on, always-connected world of the smartphone to the PC. Even when the PC is ostensibly off (or at the very least asleep), it's still running applications that don't use to much power to collect relevant information from the internet — from email, to news, to social network updates. An always-connected PC can access a trickle of information from the wider internet, displaying it so that it's visible whenever you need it — you just swipe the touchpad to open the screen and read notifications.

Intel expects first-generation Nikiski devices to ship in 2012, with a second generation following shortly afterwards. The first generation will be traditional lightweight notebooks, while the second will be based on the Ultrabook specification. The price is expected to be around $699, making it very competitive with true tablets and with conventional PCs.

The best Windows laptops you can buy: 12 we recommend for every budget