Acer held its CES press conference in Las Vegas on Sunday afternoon, a day or so before the show officially opens. Unveiling a consumer cloud service, three new ultrabook-format notebooks and a quad-core Android tablet with a full HD screen, CEO J.T. Wang noted that the economic outlook for 2012 was poor. Even so, Wang saw four key opportunities for Acer in the coming year: "Ultrabooks, the next-generation Windows on different CPU and different devices (ultrabook, tablet and smartphone), AcerCloud as a link to users, and as strategic differentiation for the long term, along with a new move to the commercial market."

The Aspire Timeline Ultra range, with 14in. and 15in. versions, stretches the definition of ultrabook, keeping it thin (although not quite as thin as many other ultrabooks) and light with long battery life, but adding a second spindle with a DVD drive and dedicated graphics. Built using Intel Core-series processors, the Timeline Ultra delivers more than 8 hours of battery life, according to Acer, with resume from sleep in under 1.5 seconds and Acer's Always Connect for instant network connections as soon as the device wakes from sleep (required for some of the features in AcerCloud). The Timeline Ultra will ship in Q1 2012. 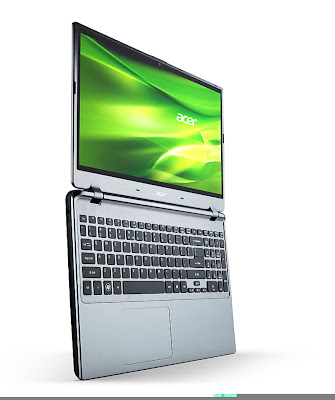 The Aspire S5 is a more conventional ultrabook design, similar to the current generation of devices with a very thin and light case design. Only 15mm thick, the Aspire S5 has a 13in. screen and weighs 1.35kg. Resume times are less than 1.5 seconds, again using Acer's Instant On and Always Connect technologies. In order to give the Aspire S5 a full set of ports, it has a MagicFlip key that triggers a drop-down panel, opening to show a mix of USB 3.0 and Thunderbolt ports. The Aspire S5 will ship in Q2 2012. 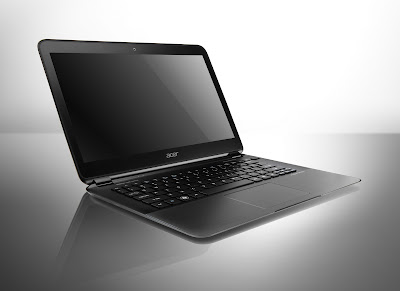 Part of Acer's 2012 offering is AcerCloud, a cloud-mediated file streaming and sharing system. Instead of storing files in the cloud, Acer will use its cloud service to host an index of files and metadata, in any folder on a host PC (which must be running Acer's software). Currently intended to handle pictures, audio and common Office files, the AcerCloud tools will be bundled with new devices from Q4 2012 in the UK (the US and Greater China will get earlier access in Q2). Although Acer's cloud services are similar to Apple's iCloud, the underlying mechanism is very different, with very little information stored on Acer's servers — you keep control of your files. AcerCloud client software will be available for Windows PCs and Android devices, with DLNA streaming to additional home media devices.

Attendees got a sneak peek at the next generation of Acer's Iconia Tab Android tablet, the A700, which will be a quad-core device (which we suspect is using an Nvidia Tegra 3 processor) with a native full-HD display, running a version of Ice Cream Sandwich. Further details were lacking (including a release date), but the device has a high quality 1,920-by-1,280-pixel display and the demonstration video was clear and well defined. We're not entirely convinced that such a high resolution is required in a tablet device, but there's also an HDMI port so you can connect your tablet to a larger HD screen.

Here's everything Samsung announced at Unpacked 2023