Changing Times in the HR World... 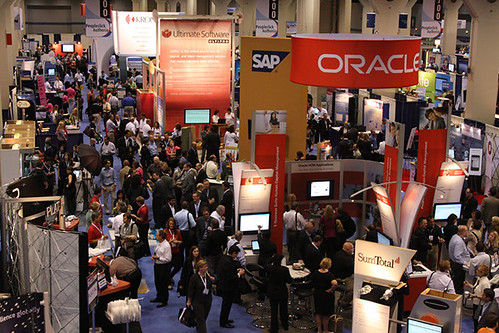 Like accountancy software and spreadsheets, HR Technology has been around as long as business computing. Recruiting, payroll, tracking work time, performance appraisals,  employee benefits administration, managing training and learning and performance reviews and records...and of course the funeral parlor like world of 'off boarding' may not be the sexiest of software spaces but they form the bedrock of the way companies organize their most expensive outgoings and assets - their people.

Like other foundational enterprise technologies the space seems to move pretty slowly if you're an outsider, however cloud computing and the changing societal dynamics of social networks is really starting to shake up possibilities a space that can be very tough to refit and reorganize while in 'mid flight'. This year's major US HR Technology Conference is going to be in Vegas in October rather than its former Chicago home and promises to be of particular interest this year. Thanks to my friend and HR Tech Conference co chair Bill Kutik who has been a big help in helping me organize the HR track at the last two Enterprise 2.0 conferences, if you use the Promotion Code ENTERPRISE11 (all caps) when you register online you can take $500 off the rack rate of $1,795. The discount expires September 19.

We're in difficult times economically and the speed at which people change jobs - willingly or otherwise - is having a profound cultural impact on a software space that has historically been more suited to long term employment tracking.  Thinking globally and beyond parochial regulations is becoming ever more essential for success  at the same time as businesses need to find ways to be ever more efficient with the resources they have.

Meanwhile the massive changes in our personal, social and societal lives enabled by the first generation of social networks at scale has resulted in the power of personal interconnections now being widely understood across most of western culture. This has also resulted in our current information overloaded societies, which if left untended can have a significant impact on business efficiency. The chattering classes have now gone viral, borderless and timezoneless:  Handling the sheer volume of opining and dialog enabled by the consumer internet available to to your culture and employees is challenging in terms of time and efficiency - successful collaboration and innovation nurturing strategies are fundamental to effectively harnessing the positive attributes of modern 2.0 HR Technologies while limiting the negatives. The alternative is the notorious 'social notworking' seen in less focused business environments, where personal lives and personas limit the power of the next generation of technologies in a business context.

Three analysts are proposing new ways -- new frameworks, really -- for helping you figure that out. And you should do that because your systems are, as experts say, "an investment," and like stock, you want to know which ones are going up and down.

Gartner's Jim Holincheck (our closing keynoter at HR Technology® in two months, in case you've been AWOL for awhile) and his colleague Thomas Otter think software is going to split (and largely already has) into three categories: Systems of Record, Differentiation and Innovation.....

Paraphrasing Bill's piece, Independent analyst Amy Wilson (and blogger as "Shiny & Useful")  at Wilson Insight/ Constellation Research Group ' People Management Technology'  report 'is both broader and narrower than Gartner's, but comes to the same conclusion: talent management suites will be subsumed into and extended to foundational platforms (like the HRMS').

Battles for budget within companies for updating System of Record and the dismally named 'Human Capital Management' needs will be empowered and informed by the broad panoply of technologies that will be showcased at HRTech conference, from the on premise giants and the SaaS challengers along with a rich array of speakers with deep roots in this part of the business and software world. There is of a course a broader world of innovation and collaboration technologies with increasing adjacencies to the traditional world of HR. Many of the innovations of the Enterprise 2.0 pure play and point solution vendors have been 'embraced and extended' as features into HR suites, just as they have in other parts of the software world under the fuzzy 'social' rubric.

The pdf brochure for the HR Tech Conference is the best way to digest the agenda and value of the conference - here's the link. Despite the lack of whiz bang attention deficit information overload alwayson social 2.0 fashion casualty language don't be fooled into thinking this annual event isn't important in the enterprise world. It's widely considered the premier global event in the HR world, which has an opportunity to raise its profile in this current era of executive interest in transparency, collaboration, innovation and social networking.

The broader challenge for the space is intersection points with other parts of the enterprise tech jigsaw puzzle that will drive the shape of things to come in the Human Resources world across areas outside their traditional boundaries.